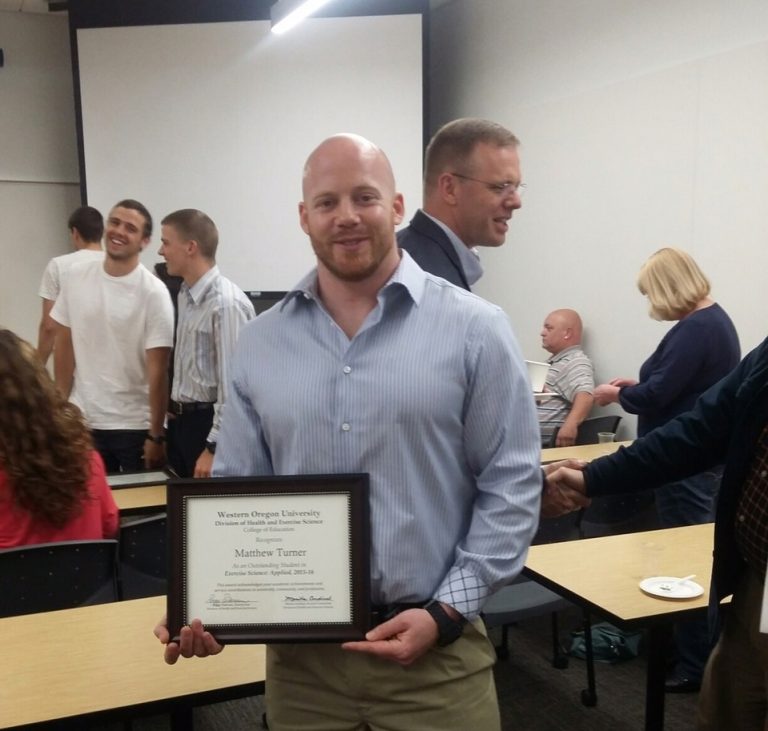 Matt Turner is a graduating applied exercise science major. He chose WOU because his academic advisor from Chemeketa Community College suggested it for what he was doing, which at the time was pre-physical therapy. His advisor said that WOU was a great school with smaller class sizes and it was affordable. Turner said that this is what he was looking for and he had heard about Western’s good representation, therefore he chose WOU for his undergraduate degree.

Turner’s favorite spot to study on campus was the third floor of the Hamersly Library and felt like it was a good place for his knowledge to synthesize. He enjoyed many food places around campus and loved Java Crew for coffee.

Turner originally moved to the U.S. because he had some family here and lives in Oregon now because he loves the state. He had lived in Oregon once before in his late teens. The one thing he misses most about Canada is four distinct seasons. “You don’t appreciate shoveling driveways and walkways until you’re not doing it. Watching winter come along, watching winter turn into spring and spring into summer and then summer into fall. Watching those distinctions and those actual changes where they’re so full and drastic. I miss that, I miss the sky up there because it’s higher elevation. It seems like you’re a little bit closer to the stars.”

When asked what he wished people in the U.S. understood about Canada, Turner replied, “Me personally, I like it the way it is. People feel comfortable being able to joke about Canada. You can tell that everybody who jokes about Canada actually loves Canada. That’s just their way of protecting their true feelings and undying love for that nation. Canada and the United States, there’s only a political border that separates us. Since that divide has been there for so long, there’s a cultural difference. I like it the way it is. I’m glad American nationals feel comfortable enough to joke because you can’t really do that with other countries.”

Originally, Turner wanted to become a physical therapist, but changed his mind just about eight weeks ago and will become a chiropractor instead. “When I was in grade 7 (Canadian elementary schools are from K-7), we had these little yearbooks. You know, your most embarrassing moment, your most memorable moment, etc. And your future occupation, why they had that I had no idea, but I wrote chiropractic. I’ve been fascinated with that profession since I was a kid. I’ve been treated by a chiropractor and nothing but great experiences. They’re amazing. It’s an amazing profession and when I was doing this whole PT thing, it’s because I’ve had knee surgeries and I’m an ex-athlete. PT got me running again and really got me interested in the movement sciences. I declared ‘I’m gonna become a physical therapist.’ I did everything necessary to do that. When I decided I didn’t want to be a PT anymore, and I started really reconsidering chiropractic, I noticed that I already actually completed anything chiropractic required. Not only that, but I pretty much exceeded with what was required.”

Although he switched his future profession from physical therapy to chiropractic, Turner states that his physical therapy internship was very rewarding at Northwest Rehabilitation Associates in Salem. “It’s great, I’m hands on. Loving it. It’s great exposure. Anybody that really wants to do PT should really see all the settings and realize it’s not just orthopedic. It’s not just football and basketball players returning to the game. In fact, that’s probably the smaller percentage than what’s actually happening in that profession so I think that people really got to get a better understanding of all the areas and the entire scope of PT. There’s a lot of cool stuff and there’s exoskeletons and biomechanic heavy. I think chiropractic is a little more biomechanic. If you’re gonna be PT, I would say understand and facilitate motivational strategies and know that and understand that you can’t change everybody. And motivation and adherence are the two biggest mysteries in anything to do with exercise science.”

Turner presented at the 2016 Academic Excellence Showcase. His project involved a lot of biomechanics and a lot of hard work. He invented a piece of exercise equipment and even put a patent on it. The invention occurred to him in 2012 and in 2015 his advanced biomechanics class gave him the opportunity to develop his own research and protocol to test it.

Turner explained his research: “I invented a piece of exercise equipment and I put a patent on it. Basically, for the upper fibers in the trapezius muscle, there’s no exercise equipment. A patent is a very expensive, necessary route to protect your intellectual property. I had an idea for an invention in advance biomechanics with Dr. Castor. He gave me an opportunity to develop that. I chose a research partner by the name of Rowan Cheney. She’s smart as a whip, just a great person. What an intellect. Her and I did some background research and it was my invention so I built it. I asked her to assist me throughout that class. There’s no exercise equipment for the trapezius except for dumbbells so I invented a way to target and isolate the most important part of the shoulder neck complex with the upper fibers of the trapezius. We tested it with an EMG via a biopac MP150 system with EL503 electrodes. An EMG is an electromyographer and what that does is it shows you the electric stimuluses that’s being conducted through a muscle when your muscle is activated. So if you look at it, you have that EMG on you and when you flex a muscle, it’ll give you an amplitude. The bigger the amplitude, the more muscular activation there is.”

He continued, “I put electrodes on me and with the assistance of Dr. Armstrong who’s a PHD in Exercise Physiology here on campus, he’s actually the chair of the IRB too, Institutional Review Board, we went to the exercise physiology lab after I built my prototype (proof of concept, rudimentary thing) in my garage and we tested traditional dumbbell shrugs. So it’s a shrug apparatus, you have two dumbbells, and I have those electrodes on me, so I did 30 shrugs right? Took a recovery period to let the muscles rest. Then I put on my device, same way and everything, same EMGs, same setting, everything, and we did it with my device. What it did is it gave us a printout of the EMG, a recording, and my claim, that it isolated and increased upper fiber activations, completely correct. We got empirical data to support it, so I started researching attorneys, patent attorneys, made my decision, went and followed through with a patent. So yesterday, basically, I had an idea, I had an invention in my head, but for the first time ever, I was provided with this opportunity to develop my idea in a class, in an advanced topics class, biomechanics. Soon as I found out Dr. Caster was offering that class, you know I recommend that to anybody, anybody who’s going to be exercise science, you know and anybody who has an idea, hold onto it. Keep your mouth shut, wait to get to that class, and develop it. Because it’s an actual opportunity if you take it for what it is, and it’s not just a class, it’s not just a grade, it’s an actual opportunity to see what product development is. And you can do amazing things. Like this next year I could start the chiropractic program in October if I want. I’m not, I’m going to start that in 2017. I will spend this next year, full year, developing the product. So yesterday was a poster presentation at Academic Excellence where Rowan and I for the first time ever, apart from our cohorts in our class, we actually got to show everybody what it was.”

Not only has Turner put so much work into creating and building his invention, but he’s also been very busy as a full time student, full time bartender, and a full time dad. Turner does all this while maintaining a high GPA. All Turner wants to do is to lead by example for his kids and do right by his family.

After graduation, Turner plans on opening his own clinic in Salem. “I’m not going to all this school to be an employee even though I know there’s benefits to being an employee, it ain’t about that for me. Something you build, you pass down. I got three daughters and I’d like to set the right example. In chiropractic, you work hard to get there, you work hard to build it, to make it happen, to facilitate people’s needs, and then one day you can back off a bit and really enjoy good quality life. That’s what I seek in my future.”

Turner definitely enjoyed his career at WOU. “The professors are amazing, they actually want you to succeed. All the students I’ve gotten the opportunity to work with, there’s so many intelligent kids, it just blows my mind how smart these young gaffes are. Great. The environment is amazing, the campus is super clean, it’s beautiful. The third floor of the Hamersly Library is the quietest place in the world, and it’s carried me through. Everybody on campus is so respectful. It really seems like everybody’s here to learn. I don’t know if it’s like that everywhere. I’ve never been to OSU or U of O, or these big places. I don’t want it. My class sizes here are the same class sizes I had at Chemeketa and that was a good environment too. Well, Chemeketa is a different environment, let’s be honest. It’s a good school, get through it and get out. I was excited as hell to finally get out of Chemeketa. I am not so excited to leave WOU, not at all. I’m excited to graduate, all this hard work is going to turn into a bachelor’s degree and I’m all set up for my future, but, I walk through here knowing that these are my last days and I’m like, damn, you only get this atmosphere once in a lifetime. I recommend Western Oregon to absolutely anybody. Anybody. All these parents getting ready to send their kids off to college, I’m like ‘hey man, Western, go to Western, it’s amazing. And do exercise science, cause the program is ahead of its time, it’s amazing.'”