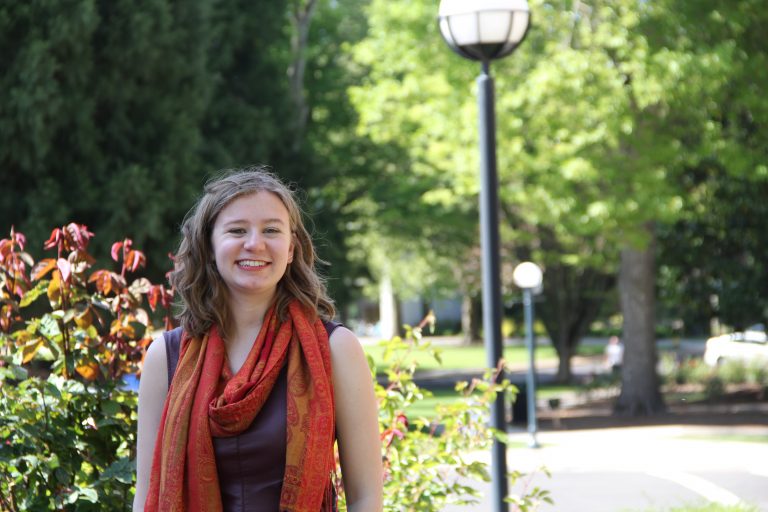 Nicole Larsen is an outstanding student with an eye for adventure.  Larsen decided to stay in Oregon, after moving here from Utah for high school, and it has lead her places she never thought she would be able to go. She came to Western Oregon University after falling in love with the campus upon visiting it and knowing that if she came here she wouldn’t just be another number in a sea of students. With nothing in her mind of what she wanted to study she started her journey as a first generation student.

Shortly after beginning her freshman year, Larsen started working as a student assistant in WOU’s then-Public Relations Office (now Media Relations and Social Media Department) only to soon find it would lead her to know every nook and cranny around campus. It was there she met Lisa Catto who would become her silver lining here at Western. No matter what she was going through Larsen stated that Catto was always patient and flexible which really enhanced Larsen’s ability to grow personally and professionally. Part of the flexibility Catto offered to Larsen allowed her to set off on adventures outside of WOU.

Though Larsen loves WOU dearly she said it wasn’t just enough to be on campus and decided to shoot for bigger things that would give her the hands on experiences she craved. To turn her learning into doing Larsen went abroad twice. The first abroad trip was an internship with Doctors without Borders working with bringing HIV aid and medical care to areas that need it the most in Cape Town, South Africa. The second was a student exchange program to Nova Scotia, Canada in which she had applied for a scholarship the year before. Larsen said that studying abroad was one of the best things that she has done during her school experience and if you are thinking about studying abroad to do it, it helps you become more aware of the world around you. She explained that a lot of students are scared that it will cost too much, but National Student Exchange (NSE) uses in-state tuition.

Even though Catto was a huge support for Larsen, she wasn’t the only support. Dr. Katherine Schmidt of the WOU writing center was also a huge support for Larsen helping her grow academically becoming a clearer communicator and gain confidence in herself. Larsen worked at the writing center for a large portion of her time at WOU and said how it is truly like a family there and watching people grow makes it a job experience worth applying for.

Larsen also described Dr. Emily Plec as as having a huge influence on her academic career. Plec challenged Larsen in ways that helped her down her path as a student. Plec would eventually become one of Larsen’s minor advisors after Larson settled on a major in anthropology with a double minor in health and communication.

After graduation, Larsen plans on taking a small break from school before returning for her master’s degree in public health. During her break she plans on getting a  job in public health sector hopefully having a part in women’s health. Though she will miss her stops by the Cannon Art Gallery to look through artwork and her occasional trips to Rick’s place, Larsen is excited to put her learning into doing. Here’s to many happy years and many more to come, Congratulations to Nicole Larsen, class of 2016!