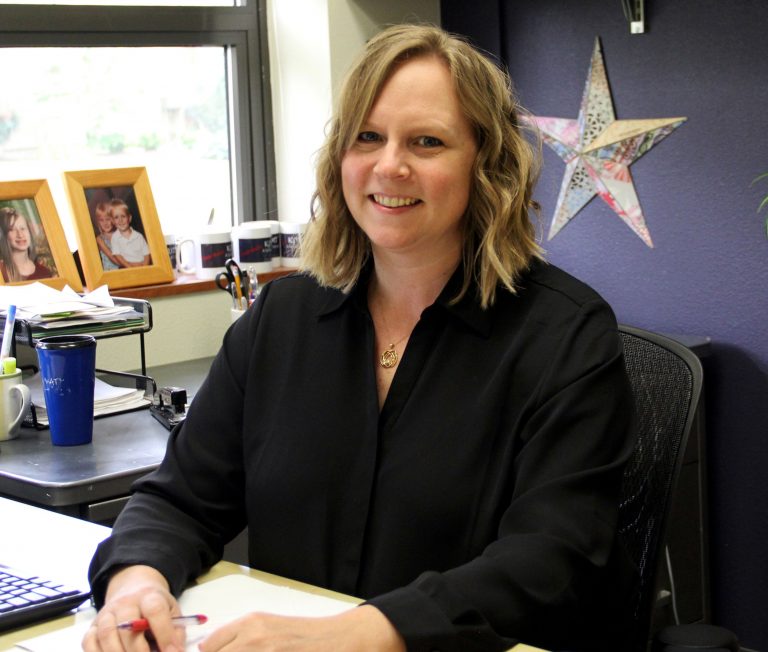 Dr. Cheryl Beaver has found a way to balance her academic interests at Western Oregon University: mathematics and education. This year’s Mario and Alma Pastega Award for Excellence in Teaching recipient, she has flourished as a math educator. She and her husband, Dr. Scott Beaver, joined WOU in 2005. Prior to becoming a collegiate educator, Beaver was a cryptographer (someone who codes and decodes messages).

Beaver discovered her love for math as an undergraduate at Pacific Lutheran University. She’d always been good at math, but while in college she began to see more real-world applications. “There’s a lot more to math than simply adding up numbers,” she said. During graduate school, Beaver did a lot of teaching to pay her way and discovered it was something she enjoyed. “What I love most about teaching is the students.” She’s found that Western students in particular are kind, generous and hard-working.

There are three groups of students Beaver finds particularly meaningful to work with. One is pre-service teachers because they’re so excited about being teachers they’re eager to learn the math (even if they don’t love math too much). She also enjoys teaching math majors because of their adoration for the subject. The third group is students in the graduate program for in-service teachers. “It’s been so fun to work with practicing teachers. I’ve learned a lot from them,” she said.

Another beloved part of Beaver’s job is her work with the Math Buddy program. This is a partnership with three local elementary schools where WOU math students work with 5th graders like pen pals. The WOU students give the children math problems then offer corrections and encouragement on their work. At the conclusion of the term there is a Math Buddy fair where the WOU and elementary students get to meet each other and play games at WOU.

Beaver said WOU students who want to go through the education program take math classes before they are accepted to the program. “I love the Math Buddy project because it’s one of the first times the education students get the chance to interact authentically with children,” she said. “I love how excited they get about it.”

Seeing the WOU and elementary students at the Math Buddy fair is an absolute delight for Beaver and her math faculty colleagues. “On both sides, their faces just light up. The kids look for their college student math buddy, the college student looks for the buddy,” she said, adding, “I think both sides get a lot out of it.”

Beaver considers the creation of the Elementary Math Instructional Leader (EMIL) program with her colleagues to be one of her greatest accomplishments at WOU. This program is the first in Oregon and it develops a mathematics specialization for K-8 teachers, much like the existing reading and autism specializations.

Seeing WOU student teachers in action, and being an educator herself, has helped Beaver develop words of advice for future educators.

About the award
The Mario and Alma Pastega Award for Excellence in Teaching honors a full-time faculty member who demonstrates excellence in teaching and relationships with students, both in and out of the classroom. Once nominees are received, a screening committee submits a list of finalists to the president, who then chooses the recipient.