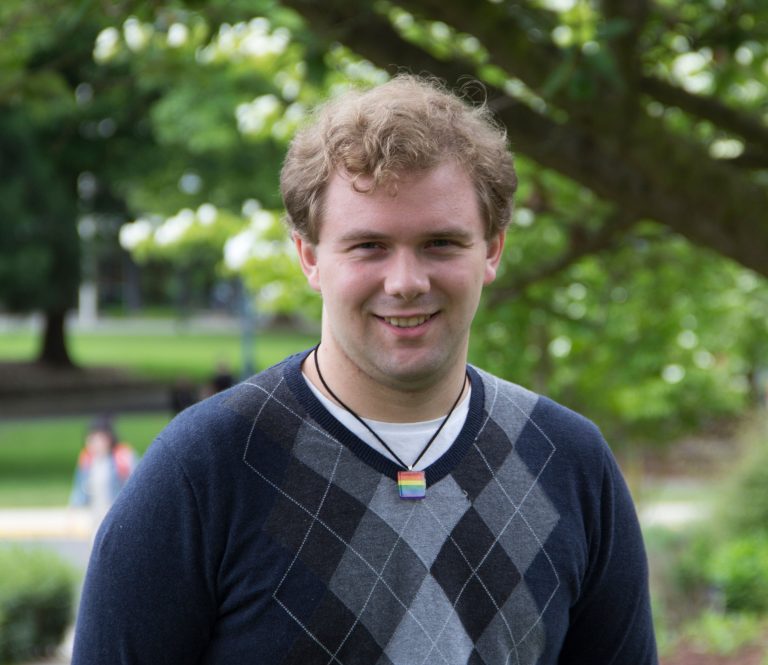 Some students find comfort in classes, some in sports, some in extracurricular activities, while others are happiest with a mix of involvement during their college career. John Goldsmith, this year’s Delmer Dewey award recipient for outstanding senior male, took advantage of as many academic and leadership opportunities as his time and interest afforded.

On the academic side, Goldsmith has a fondness for English literature. In fact, it’s what he’s earning his bachelor’s degree in and will continue studying this fall as he enters a graduate program at University of Colorado. In high school he struggled with his English classes, but his teachers helped him overcome those obstacles and now he considers it his greatest academic strength. Ultimately he hopes to teach English literature at the college level.

Goldsmith is a part of WOU’s Honors Program and he credits Drs. Keulks, Paraskevas, Schmidt and Hughes as being “strong juggernauts” in his advancement through Western. For his thesis, “The Evolution of Queer Representation in the Young Adult Genre,” he analyzed queer young adult literature. Specifically, he conducted a case study of three queer young adult novels that highlight the progression of LGBTQ characters and storylines since the late 1990’s. He found it interesting to see how these stories have progressed from a place of fear and isolation to a realm of possibility and acceptance.

On the leadership side, Goldsmith made the most of his time at WOU by getting involved in as many parts of campus as possible. As a freshman, he learned of the Drag Show and auditioned along with other students from his residence hall. He enjoyed it so much he’s participated in the Drag Show each year since. “It helped inspire me to step into more leadership roles and to be more comfortable with my identity,” he said.

What he loved most about participating in the Drag Show was the community it brought in to his life. “It fosters a sense of family and belonging for the cast. You get to know these people over the course of three months and develop a strong bond with them. You befriend people you’d never think you’d meet.”

During his sophomore and junior years, Goldsmith was involved with the Peer Mentor program. He wanted a leadership opportunity that gave him more time to interface with people and make meaningful connections. This experience helped him understand the types of leadership roles he’s best suited for. Some of those leadership roles include being an Ambassador for the Admissions Office, the president of Triangle Alliance, and a volunteer for the Stonewall Center. Each of these roles is especially important for him because he’s from a town that he considers unsafe for people in the LGBTQ community and these give him a chance to help make WOU a safer community.

He has wondered what would have happened if he chose other ways to get involved with campus, but he brushed away the what-ifs because he firmly believes that everything happens for a reason. Goldsmith encourages other students to find ways to get involved at WOU. His biggest piece of advice is to keep one’s door open – both physically and metaphorically. “If you open yourself to new experiences you’re going to have a better time than if you close yourself off.”

About the award
The Delmer Dewey Award, presented each year to the outstanding male student, is named for former Dean of Men Delmer Dewey, who died in 1953. The award was first presented in 1954.