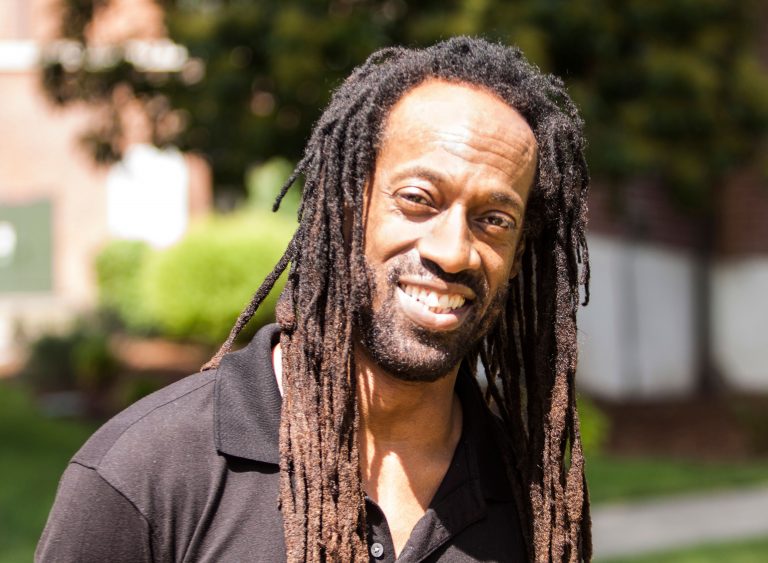 Darryl Thomas’ interest in dance began with the hope of meeting girls, but quickly grew into a deep adoration for the poetry and beauty of human movement. Thomas, this year’s Mario and Alma Pastega Excellence in Scholarship and Creativity Award recipient, has had an eventful and productive career in dance.

It all began in Detroit when he went to pick up his then-girlfriend at her dance school. They were finishing rehearsal and the director asked if Thomas could lift his girlfriend. He could, and the director asked if Thomas would do so at the upcoming dance concert. His start in dance was running on to stage, lifting up his girlfriend, and running off. He then later took a dance class in college and enjoyed it so much he switched his major from pre-med to dance.

Thomas was initially taken by modern dance and improvisation. Later he took ballet and various ethnic dance forms. Thomas traveled all over the world to learn dance – Africa, Japan, Hawaii – settling in the latter for a graduate degree.

While studying in Hawaii he auditioned for a position in the internationally acclaimed modern dance company, Pilobolus Dance Theatre, and was chosen for an opening in the company. He danced 40 weeks out of the year while touring all over the world. “I learned a lot about each culture through their dance,” he said. “So for me, when I visit a new city I like to study the dance. That tells me more about the culture than just going to look at the monuments or the sights. The dance is what really informs me.”

He recalled several months he spent in Italy where the dancers were treated like rock stars. In China he remembered dancing with elderly women in the park. Through Pilobolus he even got to perform at the 1996 Olympics, won an Emmy and collaborated on commercial projects. “I got a chance to see the world and experience it in a different way – through the dance.” Thomas considered the experiences a mix of performing and learning.

After his time with Pilobolus he was a guest artist at the University of Florida for nine months. Then a tenure-track position opened up at WOU and he moved to Monmouth. While teaching, Thomas and his wife, Valerie Bergman, reinstated the Rainbow Dance Theatre. They created the dance company while living in Hawaii, but put it on hiatus while Thomas was with Pilobolus.

Thomas has found a balance between his work with the Rainbow Dance Theatre and WOU. “The teaching, in a way, feeds my creative research, and my creative research, in turn, feeds my work in the classroom. With teaching I get a chance to experiment with movement – it’s my laboratory.” Then if he finds that something works well he develops it to the professional dancers.

Through his work, Thomas wants to encourage people to see dance as an opportunity to watch the human body in a pure and innocent way. To strip away the associations placed on the body like sexuality, race or beliefs. He’s also interested in ways he can augment the human body to make it more interesting, captivating, and driving. A powerful force in Thomas’ creative work is finding ways to get people to go to the theatre and show them something they couldn’t experience on television or YouTube. At the recent Spring Dance Concert, Thomas choreographed a piece incorporating hoverboards.

About the award
The Mario and Alma Pastega Award for Excellence in Scholarship honors a full-time faculty member who demonstrates outstanding creative or scholarly accomplishments. Once nominees are received, the Honors Committee votes by secret ballot on whether there will be a recipient that year, and if so, who the recipient will be.