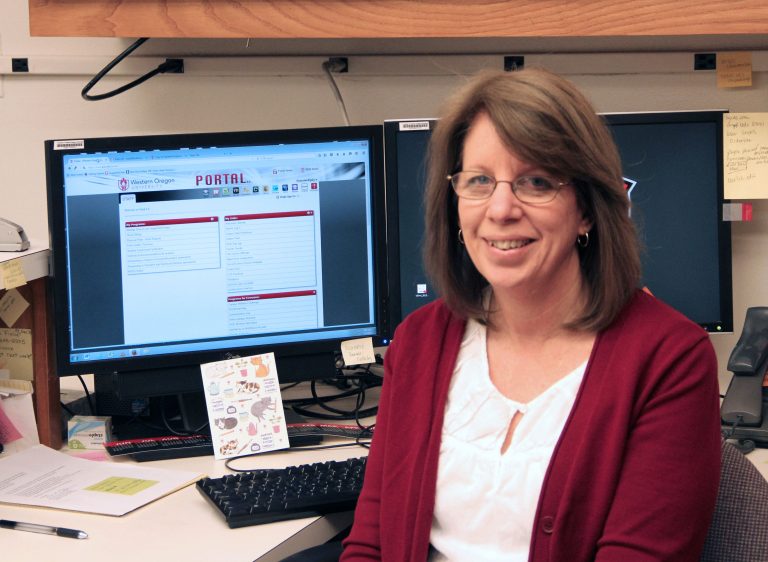 An unexpected incident led Sharyne Ryals, this year’s Mario and Alma Pastega Award for Staff Excellence recipient, to Western Oregon University. Ryals had always worked in the private sector, and her previous job was at a silicon wafer manufacturer. This industry became an unstable environment to work in, and closed like many other businesses in technology manufacturing.

Five days after the plant closed, Ryals accidentally fell down her basement stairs and broke her leg. That experience got her thinking about her frailties and vulnerabilities. She wondered if she could handle running around a warehouse floor for 12 hours a day for the next 20 to 25 years of her working life. She decided to find something a little less physically demanding and more stable. Her accident was a major turning point both personally and professionally.

Ryals saw an opening as an office specialist for the Math Department 11 years ago. She didn’t have any connection to WOU and hadn’t visited the campus before her interview. “I came and immediately liked it here,” she said. Now she struggles to imagine life without WOU and its community. A major part of her job in the Math Department was facilitating math placement testing as well as skills testing for education students.

Five years ago Ryals moved to the Social Science Division to serve as the administrative program assistant. Testing is no longer a significant portion of her job, but supporting students and faculty remains the primary focus. Ryals has also noticed a difference in the faculty she works with and the conversations she’s a part of. She enjoys learning about topics like social issues, politics and elections from the Social Science Division faculty.

Ryals loves working at WOU for many reasons. “It’s hard to pick one thing. It’s the working environment in general,” she said. “It’s the way everyone interacts and supports each other.” She especially enjoys working with young people. Ryals always has. Early in her career when she worked in retail management she enjoyed working with – and alongside – traditional college aged students.

Her position has helped her get to know students of other cultures and countries too. She has gotten to know Saudi Arabian students through the public policy and administration program. Ryals recalled one experience where she and a student discussed the differences between their countries. The student showed her things online, told her about the monarchy, and explained customs of his native country.

While Ryals learned that on the surface there are a great deal of differences between the United States and Saudi Arabia, she found they discovered a great deal of similarities. These meaningful interactions with students are a highlight of Ryals’ role at the university.

Other parts of her job includes assisting the Social Science Division chair with division business, scheduling classes and events for the division, and updating web pages. When asked how she felt about being honored for her work through this award, her reaction was humble and modest.

“You get in your little office and feel like you’re sort of invisible. Just there doing your job,” she said. Ryals was surprised to be honored among so many outstanding staff members at WOU. She’s grateful to work with such supportive faculty in her division.

About the award
The Mario and Alma Pastega Staff Excellence Award honors a classified or administrative staff member who demonstrates exceptional service to the university. Once nominees are received, a screening committee submits a list of finalists to the president, who then chooses the recipient.