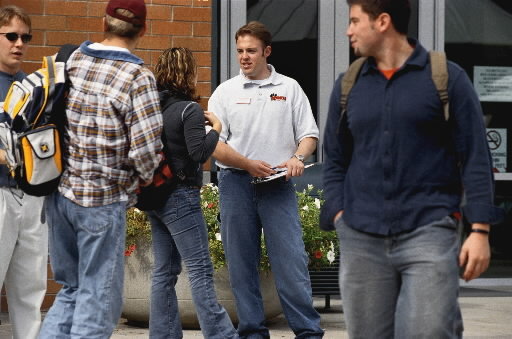 On a hot Willamette Valley morning last month, in the middle of the black robes and snapping cameras of graduation season, more than 800 brand new alumni collected bachelor’s degrees at Western Oregon University in Monmouth. It wasn’t the largest class among the state universities, and nobody occupied the stage in protest, but the occasion did have a distinction: A number of the graduates might not have made it at some other places.

For years, Western Oregon has focused on first-generation and minority students, a logical focus for a regional state university drawing heavily on the mid-Willamette counties: Marion, Polk, Yamhill. It’s also logical for a state where a third of the school population are now minorities, whose college prospects are important not only to them but to a state with an official goal of 40 percent of its adults having four-year degrees.

The key here is not to get students to your campus; it’s the considerably more difficult achievement of getting them across the stage on graduation day. As it showed this June, Western has some success in doing that; its most recent six-year graduation rate for Hispanic students was actually higher than its overall rate — above 50 percent — and perceptibly higher than comparable institutions.

To get to this point, Western has 500 students in its version of the Federal TRiO program, which provides support and counseling to students who might have difficulty navigating the system. In its Cesar Chavez program, the university brings middle school students to Western to, in Fuller’s phrase, “test-drive the campus.” At the other end of its school relationships, it works with several districts in a program to turn out bilingual teachers, a useful resource in 21st century Oregon — and maybe 21st century anyplace.

Western pursues other bold directions for a regional, patterns begun under the leadership of former president (and current trustee) John Minahan. It has 250 foreign students on campus; Fuller would like to see 500. And the university sends recruiters to China. Besides a revenue source, the foreign students broaden the feel of the campus. As Fuller says, “It changes what you see on the sidewalk.”

Western’s TRiO efforts, says Cannon, are “the gold standard of what effective student support is.” As for the university’s outreach efforts, “I just can’t stress enough the importance of deep community engagement. You can’t rely on traditional channels alone to entice students to enroll.”

Still, Fuller argues, “We need to be more accessible,” a goal vital to a university with an increasingly diverse local population base and to a system and a state that keeps saying its goal is a more credentialed population. Western’s use of the TRiO program currently covers 500 of its students, but as many as 3,000 students, or most of the university’s enrollment, might qualify.

All of this effort, and all the potential for doing more, depends on Oregon’s persistently whimsical strategies for funding its higher education system.

Over the past decades, Oregon has steadily disinvested in its universities — a national trend, but one trend where Oregon can claim to be a leader — at the same time it’s been trumpeting the importance of higher education to its future. To Fuller, this raises a major question, beyond the ones about the most effective approaches for attracting and graduating students.

“What is the funding model going to be?” Fuller wonders, a question echoed down two generations of Oregon university presidents. “If we’re going to provide access, we have to ask if this is going to work for us.”

The last legislative session provided a welcome boost for higher ed. But the budget outlook for the next one is tougher, and when Oregon budgets get tight, higher education is always the first notch to be taken in.

“That historical phenomenon should be very concerning,” Cannon agrees. “History would suggest that higher education would take a disproportionate brunt of reductions.”

This was Fuller’s first Western Oregon graduation. What was striking about it, he said the next day, was “to see all the families there supporting their graduates.”

It would help to see the state supporting them, too.

This is an opinion piece published in the Oregonian by David Sarasohn. His column appears on the first and third Sundays of the month. He blogs at davidsarasohn.com.