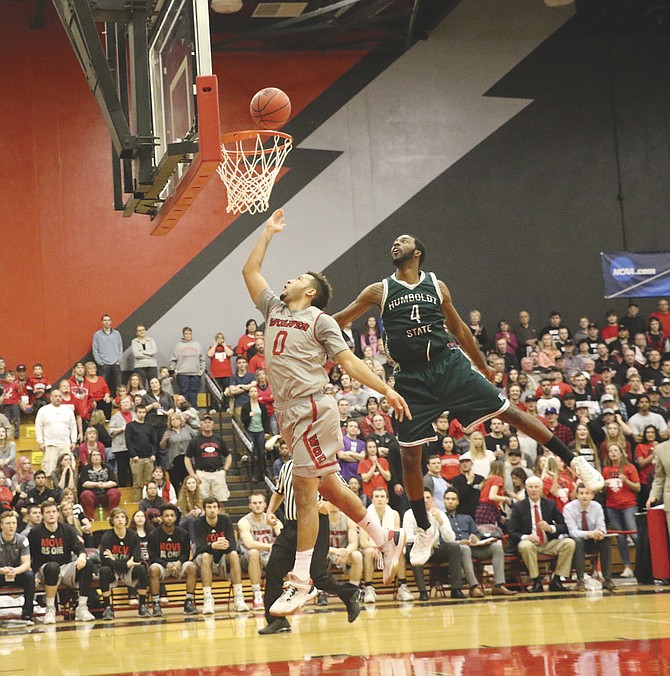 MONMOUTH — Las Vegas has long been a city where people go to bet big with the hope of hitting the jackpot.

It seems fitting that the city would serve as the setting where former Western Oregon men’s basketball player Devon Alexander will go all-in as he tries to find his professional basketball home.

Alexander will compete at the Mavericks Sports Invitational, which began Tuesday and runs through Thursday. The three-day camp is by invite-only and attracts players from the United States and overseas. Alexander has said he just wants the opportunity to show what he can do.

His chance has finally come.

“I know everyone is looking on paper and going, hang on, who is this Division II kid coming out to compete,” Alexander said. “I understand there’s going to be some Division I athletes, some Euro guys that played professional basketball looking to get an even better job or to keep their job. I’m excited to prove that I can compete at this high level.”

The Maverick Sports Invitational assigns participants into teams of eight players. Tuesday was spent working with coaches and learning the team’s offensive schemes. Wednesday (today) and Thursday will be spent playing games against other teams.

The Invitational is in its 14th year and has seen 240 alumni play professionally in the U.S. or internationally. McKinley Bryant, a managing partner at Mavericks Sports, said the invitational provides a chance for lesser-known players to make a name for themselves.

The invitational attracts scouts and coaches from a number of international leagues and is one of many that Alexander looked at attending.

“Western Oregon coach Jim (Shaw) helped me with finding the right camps to go to,” Alexander said. “There are a lot of camps that are misleading and are just out to get you to pay them money. This camp has proven to be very legitimate and has gotten college athletes a job overseas at a good percentage.”

It will be a new experience for Alexander, but he’s put in the hours working on strength, conditioning and fine tuning his basketball skills. Now, it’s time to trust his training.

“I have to stay composed and enjoy the moment and the opportunity,” Alexander said. “I get too far ahead of myself. You can’t always go in guns blazing and be really anxious. You have to prepare the right way for it. I’m a little nervous, but not worked up. It’s a good nervous.”

No matter what happens in Vegas, Alexander won’t be staying there for long. On Sunday, Alexander will begin traveling for another opportunity.

This one is a little farther away from home — Frankfurt, Germany.

“It kind of surprised me because I got this gig a couple weeks ago,” Alexander said. “I’ve never been overseas. I didn’t even know my passport was expired. I had to figure that out and rush that a bit.”

Alexander said he’ll be practicing alongside eight other American players for three to four weeks with the hope of getting offered a contract.

“I’m not trying to pressure myself,” Alexander said. “This is potentially a once-in-a-life-time opportunity and a chance to experience another culture. My family reminded me that worst-case scenario is you go to Germany to play basketball and then you’re back.”

With opportunities lining up quickly, the last month has been a whirlwind, Alexander said. But it’s also meant rarely getting to see family and friends, as his focus has solely been on basketball.

“It’s tough not seeing my family as much as I wanted to,” Alexander said. “It’s just not in the schedule right now to be able to see them and put so much focus and effort into preparing for these opportunities coming up. At the same time, I love it because I know it’s what they want me to do.”

As Alexander prepares for his first real shots at landing a professional contract, he’s realized his journey will mean more than just self-satisfaction. He’s doing this for others who may follow in his footsteps.

“It gives people coming from a small school more of a drive,” he said. “I hope this gives them more of an inspiration to pursue their dreams after their four years of eligibility. It all comes down to how bad you want it and what you’re willing to sacrifice to go for it.”