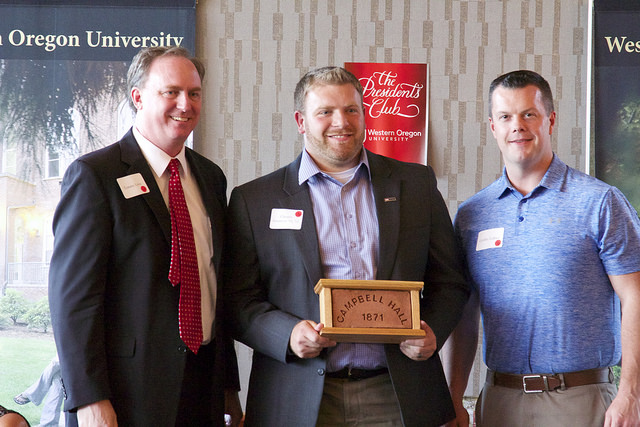 Figueroa, a first generation student from a low income family in Hood River, Ore., said she never thought she would be able to attend college let alone graduate in three years. She told the room of donors, “Your financial support has not only impacted my life, but impacted the lives of many other students in the Western community. Your financial support was tremendous and I just wanted to say to you guys – thank you.”

Fuller honored new members to the President’s Club (gifts between $1,000 and $2,499 over a fiscal year), the President’s Circle (gifts $2,500 and above), and those who reached the milestone of President’s Club level giving for 10 consecutive years. Those individuals are Sandy Newland, Larry and Janice Keudell, and Frank and Judy Vanderburg.

Fuller also recognized several individuals and organizations for milestone contributions to WOU, reaching the status of benefactor. Benefactors are those with lifetime cumulative contributions totaling $100,000 and above. The new benefactors are Dr. Beverly Freer, former Humanities faculty member, who listed WOU as a major beneficiary of her estate. The first Dr. Beverly Freer Scholarship will be awarded next year. Drs. Lance ’93 and Amy Marr have invested in athletics and specifically the WOU’s Men’s Basketball program.

“As I survey this room, it is evident how important each of you here tonight, and those listed in the program, are to our long term success,” said Fuller, during his toast. “Whether you support a scholarship, an academic program, athletics or give an unrestricted gift, each of those pieces make up the whole experience for our students. You provide students the opportunity to transform.”

Check out all those honored in the program and photos from the event.