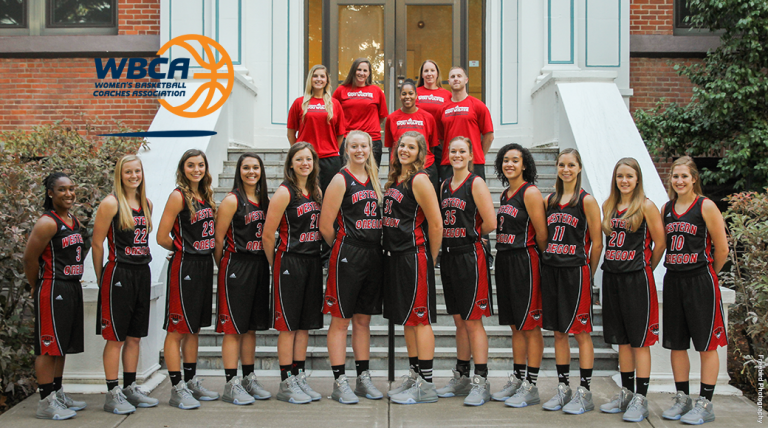 The WBCA Academic Top-25 recognizes NCAA Division I, II and III; NAIA and junior/community college women’s basketball teams across the nation that carry the highest combined GPAs inclusive of all student-athletes on their rosters for the entire season. The 2015-16 season is the 21st in which the WBCA as compiled the honor rolls.

“I am incredibly proud of this group,” said Western Oregon head coach Holli Howard-Carpenter. “We’ve had our eye on the Top-25 Honor Roll since we got here in 2013 and they have worked extremely hard each season to improve.  I’m genuinely happy for each and every one of them to be rewarded for their commitment and success in the classroom.”

Among all divisions of the WBCA, Western Oregon had the 46th highest combined team grade point average.

“What’s really impressive about this recognition is that they are able to achieve at such a high level in a fast-paced quarter system,” Howard-Carpenter added. “Our travel during the winter quarter is challenging, to say the very least, but they make academics a priority and find a way to excel despite missing class.”

Freshman business major Ali Nelke topped the team’s GPA list with a 4.00 mark, while Natalie DeLonge and Launia Davis had 3.93 and 3.92 GPAs, respectively. The Wolves also had four selections to the GNAC Women’s Basketball All-Academic Team: Jordan Mottershaw, Michelle Bromagem, Sydney Azorr and Jasmine Miller. Mottershaw had a 3.93 GPA as a communications major at WOU. The junior was a repeat selection of the GNAC Faculty Athletic Representative Scholar-Athlete Award.

Howard-Carpenter said: “This team has set the standard for our program and the new players we have added are talented and every bit as committed to academics.  I’m really excited about the upcoming season and can’t wait to get started.”