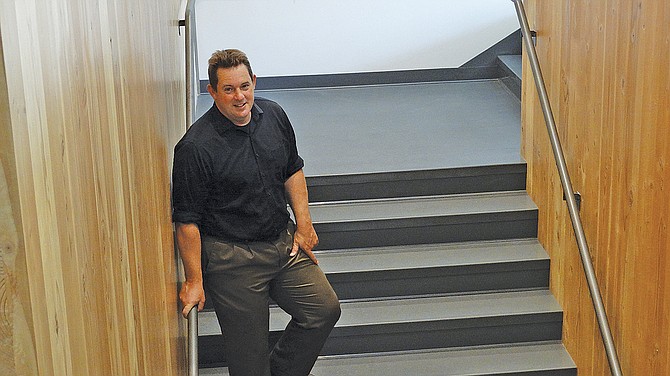 The Richard Woodcock Education Center is bustling with activity, but not from students — not yet.

It’s faculty and staff who are moving into the new building for Western Oregon University’s Department of Education.

Dean of Education Mark Girod is excited to have a base of operations for the 800 education majors on campus, as well as the 500 graduate students.

“We were in three different buildings before,” Girod said. “So for the first time ever, we will have all the College of Education faculty and staff under one roof.”

It will provide an atmosphere of collaboration, he said.

“You know how it is, often the most important conversations are the ones that happen ad hoc in the hallway,” Girod said. “I’m really looking forward to that. There will definitely be some synergy and things that come from just being in the same place.”

To encourage collaboration among students, faculty and staff, a number of spaces have comfortable furniture and other amenities. A study nook sits in the walls. A fireplace welcomes visitors in the front lobby.

“The idea is we want people to kind of hang around,” Girod said.

The 58,000-square-foot building was part of former Gov. John Kitzhaber’s wood products initiative, and is one of the only projects in Oregon to use cross-laminated timber as a structural element, Girod said. Much of that timber is exposed.

Almost 100 offices and 23 classroom spaces are housed in the new building. Classrooms were designed with teaching teachers in mind, and took tips from other departments to create the best use of space.

“When we thought about instructional spaces, we thought through the lens of our American Sign Language classes where everybody sits in a round because you want to be able to see everybody,” Girod said. “The result is our rooms are just a little bit bigger than they might normally be.”

Classrooms are equipped with two-way broadcasting equipment, a collaboration with the Salem-Keizer School District.

“We’ll be able to flip a switch and eavesdrop into what’s going on in real classrooms,” Girod said.

Other rooms are packed with boxes of hands-on supplies where WOU students will learn how to teach STEM (science, technology, engineering and math) classes.

Girod said STEM is more than just taking a math or science course, it’s the integration of disciplines spurred by business and industry.

“The industry folks have really pushed it,” he said. “They want kids who have learned in an integrated fashion to solve problems related to the real world — an engineering-type mentality.”

The large empty walls will soon be covered with work from local artists.

“As with all publicly funded projects, we had to protect 1 percent (of the budget) for art,” Girod said.

Most of that was spent on a large outdoor art installation that will go up in early 2017, but some will be used to purchase pieces from local artists.

“We also secured a donor who is contributing to an arts fund for this building,” Girod said. “Across the next 10 years, they will donate in a recurring manner, and we will use that money to purchase student art.”

The building was made possible in part from a $1.4 million donation from Richard C. Woodcock and his family — the third largest single donation in the university’s history. Woodcock was a professor at Western from 1957 to 1961, Girod said.

The money was the last that was needed for the $18.6 million facility.

In addition to the building itself, a special room bears his name: The Woodcock-Munoz language lab.

“Richard Woodcock was one of the first ones to really push for the translation of cognitive assessments into other languages,” Girod said.

• Faculty and staff are moving into the Richard Woodcock Education Center. The building is Western Oregon University’s newest for the Department of Education.

• The building will serve as a base of operations for the 800 education majors on campus and the 500 graduate students.

• The 58,000-square foot building was part of former Gov. John Kitzhaber’s wood products initiative and is one of the only projects in the state to use cross-laminated timber as a structural element.

• Nearly 100 offices and 23 classroom spaces are housed in the education center.