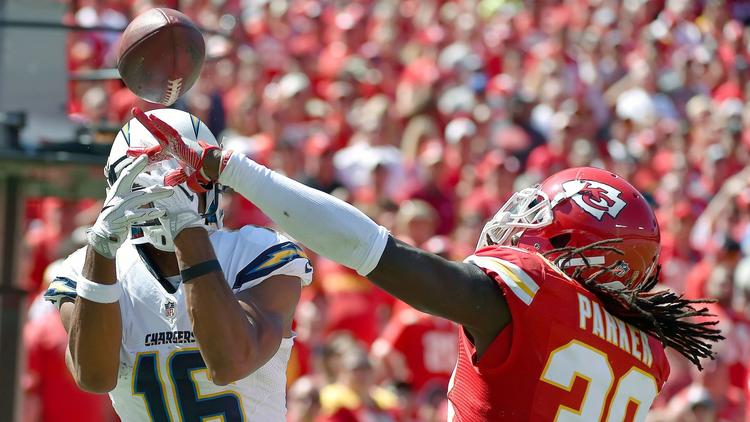 A football floated toward Tyrell Williams in the back-right corner of the end zone Sunday, the type of ball made for a man of his measure. The 6-foot-4 Chargers wide receiver had a good 4 inches on Ron Parker in coverage. Not only that but Parker’s back was to the ball, the Chiefs safety not tracking its trajectory. He was beat.

Williams could have used his size, vaulting into the air.

Or he could have simply drawn contact, leaning into Parker for defensive pass interference to set up first-and-goal at the 1-yard line.

What he did instead is what he must correct.

He did not attack.

The Chargers practiced Wednesday without Keenan Allen for the first time this season. The reality of his absence set in throughout the workout, many teammates said, as they realized it’s on them to fill the void. For Williams, that means playing the way he appears born to play.

As a second-year pro from Western Oregon, he has come a long way during his time in San Diego, making significant strides in his route-running since he entered the NFL as an undrafted rookie. What’s next for Williams — considered a polite, even-tempered man off the field — is to channel an inner dog on it, that “I won’t be denied,” that “this ball is mine” sort of fire the Chargers’ offense lost to some degree when Allen tore his anterior cruciate ligament in Kansas City.

He looks to learn from Sunday, when quarterback Philip Rivers turned to him in a high-leverage situation — third down in the red zone — during the third quarter.

Williams needed to attack the situation, one way or the other. Instead, he reached out his arms as the ball fell to him. This allowed Parker to read Williams’ body language and force a deflection.

A first down or touchdown should’ve been the only two outcomes on the throw.

The breakup led to a 29-yard Josh Lambo field goal.

“It was a perfect ball by Phil,” said Williams, who caught two passes for 71 yards. “I just need to go up and make a play. Being the bigger, taller receiver, I expect myself to make that. I’ve got to draw contact at the very least, but I expect myself to come down with that. That’s the main thing I want to focus on: I’ve got to make every catch that comes my way.”

Williams has every opportunity to apply such lessons from them.

Conservatively, Allen projected to average about 10 targets a game from Rivers this season. Those targets now will go elsewhere, largely but not entirely split across the wide receiver corps. The Chargers could add a fifth option to the mix as early as sometime in the next week, but for now, the group consists of Travis Benjamin, Dontrelle Inman, Williams and Isaiah Burse.

Of the group, Williams has the least amount of NFL experience.

But it’s clear he has the physical tools and work ethic to be a factor as the offense moves forward.

“If you told me three weeks ago, I wouldn’t know we would be in this situation; I would have told you differently,” Rivers said. “We need him to catch a bunch of balls this year — a bunch of balls and have some huge days and big gains.”

In so many ways, Williams remains early in his development.

He is allowed to be in the self-discovery phase of how good he can be, of how to play big in those big moments.

The only other time in the 24-year-old’s pro career that he saw meaningful playing time on offense came in the 2015 regular-season finale against the Broncos when he played 24 snaps. It’s also when he caught his first career pass, an 80-yard touchdown.

The team didn’t practice the ensuing week; its season was over. So, this week is the first in which Williams can use practice time to build off real, regular-season work on offense. His 44 offensive snaps Sunday were a career high after he played 30 in all of 2015.

There is little telling, if Williams can play to his size, exactly what he can do.

Right now, he is Wolverine, hunting in the woods with a slingshot. The Chargers hope he can embrace all his body allows him to do, something Williams says he understands and assures he will.

Coaches, he said, have discussed the point with him over the course of camp, so it’s not a new concept.

“I think he is beginning to realize how physically fast and capable he is to actually cause people trouble,” Rivers said. “It’s like, ‘Hey, do you know big and fast you are?’”

“He will,” Burse said. “I was even talking to him during the game. ‘Hey, I need you to get that swag to come out.’ I don’t think he even realizes it yet. … He can be so nasty. It’s just learning and growing. It’s the beginning of the season. He’ll keep learning and keep learning. If he hits his stride midseason, perfect. He can definitely be an unstoppable force. He just needs to realize it in his head, that confidence to know, ‘Nobody can stop me.’”

There was a noticeable void Wednesday at Chargers Park.

Before each practice, Allen has led the team’s wide receivers in stretching. Rivers and tight end Antonio Gates are among the other veterans who hold similar roles in the rows and rows of stretching, the leaders facing their teammates while lines of teammates face them.

Allen’s spot was left empty as a sign of respect.

But soon, it must.

Perhaps Williams will be among those to come up big. The Chargers are counting on it.