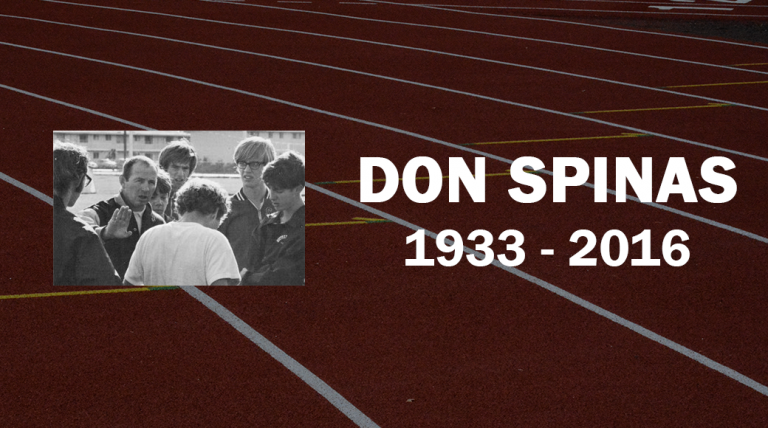 Don Spinas, the long-time head track and field coach at Western Oregon University, passed away Thursday, Sept. 22 at the age of 83.

Spinas is one of the most decorated coaches in the history of WOU track and field. During his tenure at Western Oregon (then Oregon College of Education and Western Oregon State College, 1967-1988), he led the Wolves to nine NAIA District 2 titles with the 1972 track team still being lauded as one of the best teams ever in the Pacific Northwest.

“He’s a legend,” said WOU track and field coach Mike Johnson. “Anybody that knew Don knows that he is a legend; from his own collegiate experience, from his coaching experiences or just knowing the man.”

“He has spawned from his coaching tree some of the best high school coaches in Oregon. He really inspired a lot of people to love the sport and, in turn, that is why a lot of people loved him.”

Spinas grew up hunting and fishing in southern Oregon and always had a strong affinity for the outdoors. He ran track at the University of Oregon under Bill Bowerman, and ran the 400-meter hurdles at the Olympic trials. He took his passion for track and field to his first teaching and coaching job at Central Point Junior High. In 1958, he served in the Army in El Paso, Texas. After his military services, he continued teaching and coaching at Central Point. From Central Point, he taught at Milwaukie High School until 1967 before accepting the head coaching position at Oregon College of Education, O.C.E, and later to become Western Oregon State College.

Spinas went on to lead his track teams to four consecutive conference and district championships. The 1972 team was the best team in the history of the small college track and field and cross country in the Pacific Northwest, rewriting many records in the O.C.E record book.

A celebration of life will be held at a later date. The family requests that in lieu of flowers, a donation be made to Western Oregon University Athletic Track and Field and Cross Country Scholarship Fund in the name of Coach Spinas.