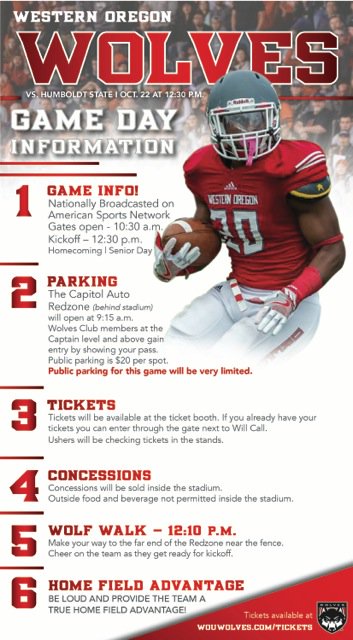 The 2016 WOU homecoming football game takes place Saturday, Oct. 22 at 12:37 p.m. Details on how to watch, game preview, and more are below.

OPENING DRIVE
• Coming off a muddy road loss in the 800th game in program history, Western Oregon will play against Humboldt State in the Homecoming and Senior Day game on Saturday afternoon at McArthur Field. The game will kick off at 12:37 p.m. Pacific on the American Sports Network for a national TV broadcast and local radio on KLOO 1340AM.
• It’s Homecoming week at WOU. The week is packed full of festivities on campus, including Saturday’s game against the Lumberjacks. The Wolves will be wearing their red uniforms for Homecoming. For more about all the activities during the week, visit WOU.edu/Homecoming.
• Saturday’s game is the final home game for Western Oregon this season. The football team will honor its senior class with a ceremony beginning at 12:15 p.m.

WIN A $1,000 SCHOLARSHIP – Thanks to great athletic donors, the Wolves will be giving out a $1,000 scholarship at Saturday’s game. Drawing slips will be made available at the Student Entry gate on Saturday morning. Winner MUST BE PRESENT at the football game to claim the scholarship.

HOW TO WATCH – The Western Oregon-Humboldt State game is featured on the American Sports Network NCAA Division II Showcase on Saturday. Fans can watch the game on the following channels:

TICKETS – Tickets for Saturday’s game may be purchased online atWOUWolves.com/WOUtickets or by calling the WOU Ticket Office (503-838-8917).

4 DOWNS
1st Down: Paul Revis is the GNAC leader with 100.4 receiving yards and 182.9 all-purpose yards for the Wolves this year. Last week, the junior had 59 yards on receptions, 42 kick return yards and 41 punt return yards to accumulate a game-high 145 all-purpose yards.2nd Down: Bo Highburger led the Wolves’ defense last week with 11 tackles, including three for loss. In the GNAC stat leaders, Highburger is second in overall tackles with 69 and third in tackles for loss with 10.5. Also in the league leaders is Tyler Johnson (10th in tackles, 46) andJeremy Moore (2nd in sacks, 7.0). Three of the top four in pass defends comes from the WOU secondary – Danny Hankins is the GNAC leader with nine pass defends while Trebriel Larryand Austin Spencer are in a group in third place with six.

3rd Down: Western Oregon faced its second shutout of the season last Saturday. The last time a WOU team was held scoreless in two games during a season was in 1994 with a 7-0 home loss to Linfield and a 6-0 road loss at Willamette.

WEEK 7 TOP PERFORMERS – Sponsored by Crush Wine Bar
Offense: —
Defense: MVP – Bo Highbuger; Top Performers – Jeremy Moore
Special Teams: MVP – Paul Revis
LOOKING AT THE LUMBERJACKS
Humboldt State surrendered 38 consecutive points to fall 45-13 at GNAC-leading Azusa Pacific last week. The Lumberjacks posted 352 yards of offense, but the Cougars rushed for 213 yards and had 340 yards through the air to finish with 553 yards. Harlon Hill finalist Ju’Quan Gardner returned to form with 103 yards on the ground on 26 carries. Robert Webber threw for 245 yards on 21-of-41 passing with Richard Doctor being the featured target with 100 yards on seven grabs. Both Julian Owens (11) and Jeff Shott (10) had double-digit tackles for HSU while Owens forced a fumble and had an interception.

For the season, Webber has 2,030 yards with 14 touchdowns while completing 63.1 percent of his passes. Eight different receivers have made 10 or more catches, led by 28 grabs from Gardner and 319 yards from Marjani Ellison (who did not play against APU). Chase Krivashei, who hasn’t played since Sept. 24 vs. WOU) has 23 catches for 318 yards. Garder is averaging 110.3 yards per game for a total of 772 yards and 12 touchdowns. Defensively, Shott paces the Lumberjacks with 52 tackles with Cameron Buell following close behind with 43. HSU has picked off five passes, two coming from Owens.
AROUND THE GNAC & 2016 OPPONENTS
Visit the original story on wouwolves.com for 2016 season in review.