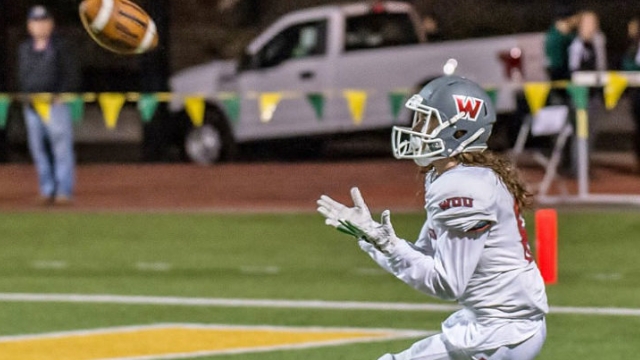 Even now, two-plus years into a career that sets records and defies convention, Paul Revis feels the doubts.

He lines up against defenders who he knows dismiss the numbers and question the scouting report, because they see a guy just shy of 5-9 and who weighs 165 pounds only with rocks in his pockets.

But one burst, one cut, one spin later, Western Oregon University’s marvel of a wide receiver gathers in yet another pass or gains an extra 10 yards on a kick return.

“I’d say there’s definitely been times when guys have overlooked me or tried to kind of belittle what I’ve done,” Revis said, “and they look at me and they’re like, this guy can’t be that good or he’s not going to do that to our defense. If that happens, I get a smile on my face and it’ll excite me, because it just adds to the fire. If anything, I just use it to my advantage, but it’s not going to affect me. If they want to compete with me, I love it. I love competition, so let’s just go compete.”

Revis wins more than his share of competitions and is a signature performer as Western Oregon (3-4, 2-3 Great Northwest Athletic Conference) prepares to face league rival Humboldt State (3-4, 1-4) on Saturday on ASN.

Revis is a yard-producing machine. He is fifth in NCAA Division II in all-purpose yardage (182.8 ypg) and second in punt return average (23.2). He is tied for 11th in receptions per game (7.4) and averages just over 100 yards per game receiving.

Though he still has three games remaining in his junior year at Western Oregon, he is already second in career catches (163), third in receiving yards (2,562) and second in all-purpose yardage (4,671).

“His change-of-direction and ball skills are elite,” head coach Arne Ferguson said. “He can go by you. He can turn you inside out and go by you. He’s getting double-covered, but he still finds a way to get open. It’s pretty amazing.”

Revis is a remarkable athlete who gravitated toward football. He clocks a sub-4.5-second 40-yard dash, but appears faster because of his quickness and ability to adjust and play at full speed. He was an all-state baseball player in high school. He can dunk a basketball and jumped 22 feet in the long jump in his first track meet as a senior. Yet those who know him say that his competitiveness and drive separate him from even other elite athletes.

“He plays with a bit of a chip on his shoulder,” his father, Scott, said. “He was told forever that he was too small and he can’t do this and can’t do that. He hates being told he can’t do something.”

Revis is from Scappoose, Ore., a small town (pop. 7,000) in the northwest part of the state, approximately 35 minutes north of Portland. The town also produced longtime NFL journeyman quarterback Derek Anderson and reserve linebacker David Mayo, both currently with the Carolina Panthers.

“They were the best players on the field when they played,” said longtime Scappoose High football coach Sean McNabb. “Paul was just like that. He was a dominant player.”

McNabb recalled one youth football camp when Revis was about 9, where the high school quarterback lobbed passes downfield to a couple dozen youngsters of various ages and sizes in a big scramble. One kid consistently came down with the football. McNabb learned it was Revis.

“I had an idea then that he had a chance to be special,” McNabb said.

Revis had an outstanding high school career — 150 catches, 37 touchdowns, 4,000 all-purpose yards — but was overlooked by many colleges because of his size. He considered walking on at Oregon State, but befriended a couple of players headed to Western Oregon the summer after his senior year and chose the Wolves.

Ferguson said that Revis was a good player when he arrived, but worked relentlessly and became exceptional after his redshirt year.

“Honestly, the redshirt year was probably my best year,” Revis said. “I saw the players that we had and I knew they kind of had a couple tools in the toolbox that I didn’t have yet, so I knew that year would be a long year for me and might be difficult, but I just used the freshman year to my advantage.”

With future NFL wide receiver Tyrell Williams on the opposite side of the field commanding much of the attention, Revis caught 67 passes for 1,149 yards. He averaged 184.5 all-purpose yards per game and was GNAC co-Freshman of the Year.

Revis’ numbers dipped last year as opponents shaded coverage toward him and the offense was less efficient overall. His numbers are back up this season, as the Wolves adjusted their offense to get him more touches, even though everybody in the stadium knows he’s getting the ball.

Revis set single-game school records for catches (17) and receiving yardage (250) in a win against Simon Fraser. He scored WOU’s first two touchdowns, one on a 74-yard punt return, to jump-start the Wolves’ season-opening 38-30 upset of FCS Sacramento State, a game in which he caught seven passes for 64 yards.

“We play above our heads,” offensive coordinator Brian Harris said, “and Paul is without a doubt the one guy who can go and consistently beat their guys.”

Harris said that Revis is a more polished receiver at the same stage of their careers than Williams, currently with the San Diego Chargers, though Williams’ size and gifts present a greater upside.

Still, he thinks that Revis will merit a look from the NFL, given the league’s evolution toward slot receivers who can elude man-to-man coverage and find open spots against zone defenses. An obvious recent comparison is Wes Welker, the undersized former Pro Bowl receiver who flourished through quickness, smarts and precision.

“Paul is kind of a Division II Wes Welker,” Harris said, “but if he were in the Pac-12, he’d be the Pac-12 Wes Welker, and if he gets the chance, he could be the NFL’s next Wes Welker.”