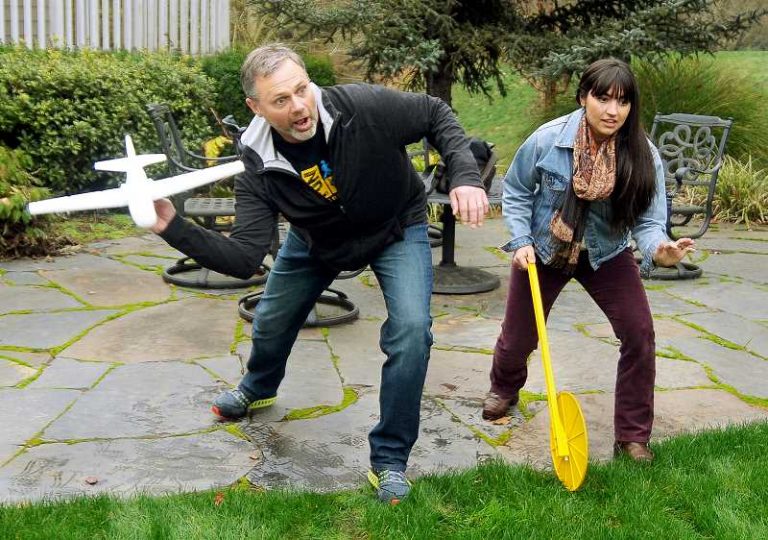 Science teachers Terry Evers and Toni Hanson have quite a bit in common.

Both have spent their entire careers in the Newberg School District, at Ewing Young elementary and Mountain View middle school, respectively, and split their time between the classroom and serving as instructional facilitators.

Each is also known for designing hands-on learning activities and bringing the best out of students.

They can also count themselves among the best in their field after being recognized with prestigious awards Nov. 10 at the Oregon Science Teachers Association’s annual conference.

It was there that one difference might have been seen, as Hanson had just recently been notified that she had been selected by the OTSA as Middle School Science Teacher of the Year, while Evers learned in July that he had been selected as one of two elementary finalists in Oregon for the Presidential Awards for Excellence in Mathematics and Science Teaching.

“I had no idea,” Hanson said of learning the news. “I think I read the email four or five times and then closed it, then opened it a couple of hours later because I was at a training. It was one of those things where I couldn’t give all my attention to it. It was not something I ever expected. I took me aback and it took me a while to understand what was actually being said.”

Evers, on the other hand, had to put extensive work into his application after being nominated for the award, which is administered by the National Science Foundation, by Ewing Young principal Kevin Milner, teaching partner Dawn Reed and former Newberg STEM coordinator Andy Byerley.

Among Evers’ notable accomplishments is playing a vital role in Ewing Young’s ongoing transition to being a STEM-identified school.

After serving in the Coast Guard and working as a commercial fisherman, Evers got his undergraduate and graduate degrees from Western Oregon University and has spent all 27 years of his teaching career at Ewing young. He has long been known as a creative and innovative instructor who inspires student interest with hands-on opportunities, like wind turbine engineering, parachute and animal membrane design or aquaculture and its place in an energy-dependent society. If he is eventually selected as the state’s winner, he will receive a $10,000 prize and a trip to the White House.

“It’s a reflection of good things that have been happening in our school district and certainly at Ewing Young as we’ve embarked on this STEM program for the last three and a half years,” Evers said of the award. “I’ve learned as much from other people as anything.”

Both split their time between the classroom and serving as instructional faciliators in the district, which has also involved taking roles with regional groups like the South Metro-Salem STEM Partnership.

“It gives you a huge degree of credibility when you’ve got your own classroom that you’re in day to day and are practicing what you preach,” Byerley said.

Evers said it was his own experience as an elementary student that proved to be the main driver in deciding what kind of teaching he wanted to do, citing the freedom he had to learn on his own that was more prevalent in classrooms in the 1970s and seems to be the direction in which school districts are moving now.

Hanson had a similarly inspiring experience in eighth grade, so much so that she had already reached out to thank her then-science teacher, current Oregon State University professor Claudia Ingham, before she learned of the award. Naturally, she cited Ingham for playing a key role in sparking her passion for science at the award ceremony as well.

“It wasn’t something that came easy, but was once I finally got it, I brought so much more enthusiasm for the subject because I had to work so hard for it,” Hanson said. “It’s just like that really cool puzzle when you finally figure it out. Everything changes.”

Hanson was nominated for the award by South Metro-Salem STEM Partnership director Melissa DuBois. But Byerley, who now serves as STEAM coordinator for the Forest Grove School District, was by no means surprised to learn his former colleague had been so prestigiously recognized by her peers.

“I would say that she is one of the most dedicated teachers I’ve ever met,” Byerley said. “She’s always been a leader on the science team at Mountain View in terms of what are we going to teach and how are we going to teach it, really trying to build some innovative activities. She really stresses relationships with students, which I think allows for richer discussion in class.”

Published by The Newberg Graphic
By Seth Gordon