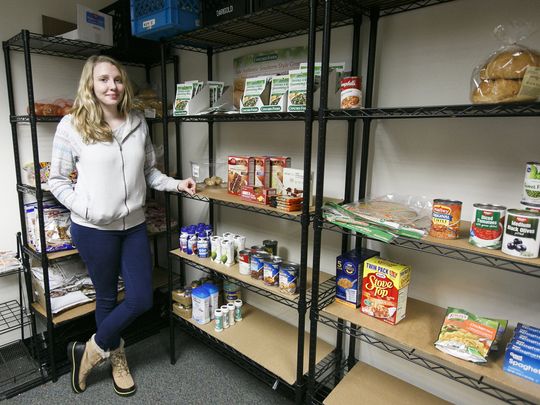 Imagine having to decide between paying for a course textbook or your next meal.

Situations like that are becoming more common for students in higher education.

“I had a student come in … who hadn’t seen vegetables for three years,” said Grecia Garcia, who helps oversee the Chemeketa Community College pantry.

“We want students to focus on their studies, not on being hungry.”

In November, the Chemeketa pantry served more than 470 adults and 70 children from the college and surrounding communities.

Chemeketa isn’t the only institution facing these challenges.

Thousands of college and university students across Oregon, and nationwide, are food insecure, meaning they lack access to a sufficient quantity of affordable, nutritious food on a regular basis.

According to the Centers for Disease Control and Prevention, 14.5 percent of American households battle with food insecurity.

It’s estimated the percentage of students may be much higher — such as the 59 percent of Western Oregon University students found to be food insecure in a 2014 survey.

“Not everyone can go to the supermarket and pick the food they want,” Garcia said. “So we want to provide that experience.”

With 12 student volunteers, Garcia helps runs the Chemeketa pantry. A concessions-like window in a main building on campus is opened when someone in need stops by.

People can select up to eight items of their choice per day. The pantry holds canned foods, can openers, diapers and formula, dog and cat food, hygiene products and more.

Experts suggest increased tuition costs, increased enrollment, changing college demographics and a shift in merit-based versus need-based aid may be some of the many factors leading to an increase of hunger in higher education institutions.

And there is no doubt it has a negative impact on students’ abilities to succeed.

In addition to lower academic performance, one study by No Kid Hungry found hunger was associated with an inability to concentrate on schoolwork, behavioral issues and an increased likelihood to report feeling sick.

Western Oregon University is also working to fill the gaps students face when their meal points run out, or if they simply don’t have a university-supported meal plan.

More than 90 volunteers and student staff run The Food Pantry at Western, serving hundreds of students, staff and community members each year.

Student leaders of the pantry said they try to get fresh, quality food for people who use the pantry. Both Chemeketa and Western receive donations from Marion Polk Food Share, among other gardens and partnerships.

Tiffanie Bowles and Rebecca Hardgrave said they are trying to normalize the use of the pantry so it isn’t seen as ‘a bad thing people have to do.’

“You can’t make assumptions about people,” Hardgrave said. “Food insecurity doesn’t present itself the way people think it would.”

The Western pantry is a “shopping-style” pantry, which allows people who use it to do their own shopping.

Bowles said the shopping style allows for more dignity and independence for the shopper. There is no limit to the amount of food each person can have.

“We are a small pantry, but when you hear how many people are served, it’s inspiring,” Hardgrave said.

At the start of the 2016-17 academic year, the pantry didn’t have any volunteers signed up. But now, Bowles has to change the volunteer schedule every two weeks so everyone gets a turn.

“It’s hard work,” Hardgrave said. “(But) we have a community here that cares about the pantry.”

Not only is Oregon the ninth hungriest state in the country, but it is the only state to see an increase in hunger in 2013-15 data from Partners for a Hunger-Free Oregon.

“Campus food pantries (are) an indicator these things are spreading,” said Matt Newell-Ching of Partners for a Hunger-Free Oregon.

Newell-Ching said the price of housing and rent is one of the reasons there has been an increase in poverty and hunger in the state.

“Students are scrappy,” he said. “If they don’t have family wealth to lean on, it’s hard.”

Newell-Ching said some students, especially first-generation students, are forced to decide whether they should go to college at all as a result.

“There’s no reason (for hunger) in this day in age,” he said. “We could end hunger as a society if we simply decided we wanted to and collectively came together.”

They are in particular need of canned food with pull-top openings, can openers, food for people with dietary restrictions (i.e. gluten-free food), and money donations to buy meals for the holidays. For a complete list of items to donate or more information, visit collegelife.chemeketa.edu or call 503-399-5116.

Western’s pantry is open 8 a.m. to 5 p.m. Monday through Friday during the school year in the Academic Programs and Support Center Building (APSC) on the Monmouth campus.

The pantry is always looking for donations of food, hygiene products and money. For more information, email foodpantry@wou.edu or call 503-838-8553.