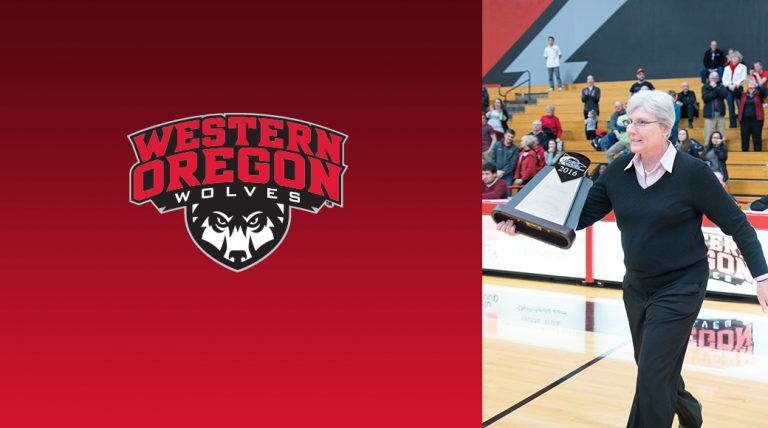 Barbara Dearing will retire June 30, 2017, as its executive director of intercollegiate athletics at Western Oregon University.

“I have been blessed to have been involved with WOU Athletics,” Dearing said. “It’s been an honor to work alongside the coaching and athletics administrative staff whose focus has been about the student-athlete experience, and how that experience can help shape our future citizen-leaders. During my career, I’ve worked with many excellent university leaders, and outstanding student-athletes.”

She added, “I’ll always be very appreciative of the opportunity President Mark Weiss gave me when he appointed me director of the program; it has been a great experience to work for both President Weiss and President Fuller.”

President Rex Fuller said the university will finalize plans to launch a national search for a new athletic director in the next few weeks. “Barb has worked tirelessly to raise the profile of Western Oregon athletics and led an effort to ensure that our student-athletes excel in the classroom and in their chosen sport. Under her leadership, student-athletes have higher retention and graduation rates than the general student body and our teams are often recognized in the GNAC for academic and athletic honors. The entire WOU community wishes Barb success in her next life chapter.”

Dearing became athletic director in July 2013, and her era ushered in several “program firsts” for the school. As Oregon’s only public NCAA Division II institution, WOU raised awareness of its athletic program when it was awarded the bid to host the 2015 and 2017 NCAA D2 West Regional Cross Country Championships, a first for the program. WOU was also awarded the bid to host the 2016 NCAA D2 West Regional Men’s Basketball Championship in Monmouth for the first time in the program’s NCAA history. The Men’s Basketball team won its first ever NCAA Regional Championship and made its first trip to the NCAA D2 Men’s Basketball Elite Eight National Championships where the team finished as a national semifinalist with a record of 31-4.

“There’s been a long tradition within the Wolves athletics program of providing students with a quality academic experience. I’m proud to have been able to contribute to that tradition,” Dearing said.

In the classroom, the Wolves steadily increased both the department federal graduation rate and the Academic Success Rate along with raising the overall student-athletes’ GPA to 3.04. During Dearing’s tenure, the Athletics Department established a chapter of the National Athletics Academic Honors Society Chi Alpha Sigma in 2013, and has inducted 72 student-athletes into this prestigious national academic society during its first three years. Additionally, WOU has had 184 GNAC All-Academic Award winners, and 72 D2 Athletic Director’s Association Academic Achievement Award recipients.

“The student-athletes have always been my focus during my athletics career both as a coach and an administrator. I’ve always tried to do whatever was possible to enhance the student-athlete experience, and to provide them the opportunity to learn important life skills through their participation in athletics,” Dearing said. “I’ve stressed to our student-athletes that ‘your college degree in your chosen major teaches you how to make a living, but your athletic experiences teach you how to live.'”

WOU Athletics has been able to increase its full-time assistant coaching staff along with increasing its full-time certified athletic training staff and certified strength and conditioning staff during Dearing’s time at WOU. The Athletics Department increased its revenue through donations to sport teams and athletic scholarships, ticket sales, and camp/clinic each of the past three years. Student-athletes and staff increased their campus and community service hours each of the past three years. With financial support from the university and donors, improvements were made to the stadium track, football field, and the weight room along with the addition of team rooms for baseball, women’s soccer, and softball. Various ongoing improvements continue to be made to the indoor practice facility, baseball, softball, soccer, and track throws venues.

In addition to her duties as the athletic director, Dearing has also served on various NCAA national committees and regional sport committees. She is completing her terms on the D2 Championships Committee and the D2 West Region Softball Committee. She currently serves as a board member with Travel Salem, and continues to promote travel, tourism, and educational opportunities in the mid-Willamette Valley, which she has come to call home.

Dearing said she’s confident in the ability of the coaches she is leaving in charge to continue mentoring WOU student-athletes. “They are great quality coaches who really care about our student-athletes and make a difference in our student-athletes’ lives. I’m proud of all of our accomplishments and the solid base upon which WOU Athletics can continue to growth and reach new heights in the future.”