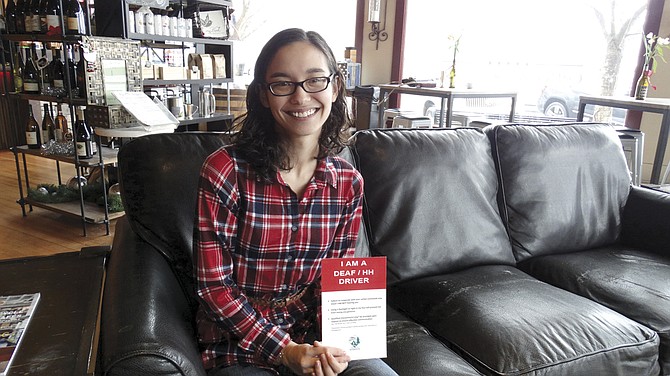 MONMOUTH — It’s not very large — it fits in the driver’s side visor — and could make a difference in how smoothly a routine traffic stop could be for someone who is hard of hearing or deaf.

Allison Kingsella, 21, is the driving force behind visor cards to bridge the communication gap between police officers and people who have trouble hearing.

“I’m obviously not deaf or hard of hearing, and I’m not a police officer, but I wanted to bridge the gap, and if it was something I can do that brought somebody peace of mind, then absolutely, I would do it,” she said.

The Western Oregon University student was inspired by a story she saw on Facebook about the Cincinnati police, who started the project.

“I got in contact with their police chief and said I would like to implement this in Oregon,” Kingsella said. The Cincinnati chief’s only request was that she stick to the format and color scheme, so that if the visor cards take off nationwide, they are easily recognizable by all departments.

She consulted with her American Sign Language advisors at WOU, as well as deaf friends and teachers, before taking the idea to the local police.

Now all three departments have the cards for people to come pick up.

On the cards, it gives tips for the driver on how to respond during a traffic stop, as well as alerting the officer to the deaf or hard of hearing status of the driver.

Dallas Lt. Jerry Mott said so far, six cards have been picked up from his department.

“I do not think anyone from our office has stopped a person with one yet, but that is not surprising when you consider how rarely an officer will stop a deaf person during their career,” he said. “I have only stopped a couple of deaf persons for traffic violations during my career. However, the person has that card to use, not just with our offices, but all officers, no matter where they may be stopped.”

The sooner communication can be aligned during a traffic stop, the better, Mott said, and the cards will help with that.

That was Kingsella’s primary goal for doing the project: To help.

She is majoring in geography with a minor in American Sign Language, something she fell in love with quite by accident.

“I actually failed Spanish,” she said with a laugh.

Kingsella, originally from California, needed two years of a foreign language to go to college. ASL fit the bill.

“I ended up taking two years of ASL at a community college and fell in love with it,” she said. “I actually had a dream all in sign language, and at that point, I thought, ‘I have to do this.’ I never felt that connection before.”

She came to Western with the intent to graduate from the university’s interpreter program, but quickly realized that standing in front of large groups — essentially public speaking — wasn’t her cup of tea.

But that didn’t take away from her passion.

“I love our town. There’s no reason to be scared of the police,” she said. “I just wanted to help. I’m not part of the deaf community. It was a little weird as an outsider making that decision to help, but when the Dallas police posted it on Facebook, one of the people who commented said, ‘I’ve been really worried about my son who’s deaf, and what would happen, and this is a great thing.’”

Kingsella said that was a good moment.

“Somebody acknowledged that it was a good idea and they would use it,” she said. “Why not? Why not do it?”

To help with printing costs: http://www.gofundme.com/2my8n8s