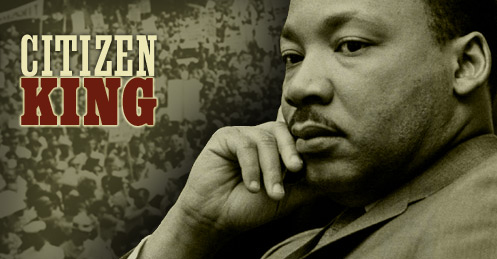 It’s winter term at Western Oregon University, and that means the opportunity to learn more about civil rights and the clash of class and race is again upon us.

Starting today, the Civil Rights Film Series gets under way on its term-long run, starting with Citizen King, an overview of the life of Dr. Martin Luther King Jr. There are 10 films in the series this year, and they address several facets of the struggle against oppression and injustice.

The series, which has been running for about seven years, is the brainchild of Associate Professor of Sociology Dean Braa. Years ago, he was on the judging panel for a civil rights essay contest, and the concept evolved to include screenings of important films about the issue.

Although the film series is part of the SOC407 class, anyone can attend the screenings. Braa estimates 40 people attend each showing, and there is a discussion period afterward. Braa said his ultimate goal with the series is to educate people of all races about America’s real history and the fight for fairness.

“Kids aren’t learning about civil rights in high school,” he said. “History books barely even mention it. I have students who don’t know even the biggest names in the movement.”

It’s an added bonus that most of the film series selections are just really good movies, Braa said. Eyes on the Prize, which features more than a dozen episodes, covers several historical aspects of the Civil Rights Movement. Braa said that one of the segments, which depicts police targeting African-American men, women and children with attack dogs and high-pressure water hoses in Birmingham, Ala., in 1963 is particularly poignant for viewers.

“They say they had no idea that happened,” he said. “They just can’t believe it.”

The lineup for 2017 includes at least one new offering, a 2015 release called The Black Panthers. It is the most militant look at civil rights in the series. There also are several films that put a spotlight on the struggles of Native American tribal members, including American Outrage, and Incident at Oglala.

“If we want students to be committed to creating a more equal, fair society, they have to look at how people have been exploited and oppressed in society,” Braa said. “It’s important, and it’s like, oh, by the way, there’s this really outstanding film on race studies already out there.”

He said that viewers, particularly the sociology students, have been moved to act after watching the film series.

“Sociology is a critical discipline,” he said. “The whole idea is to learn theories and apply them. Students have a responsibility to use the knowledge and education they get to fight oppression.”

Braa believes that awareness of social injustice is rising. He cites Bernie Sanders’ popularity in the early stages of the presidential election and, before that, the Occupy Movement as examples.

“Inequality is so obvious,” he said. “It’s all over the world.”

Students who want to learn more about the history of the Civil Rights Movement and how it affects them today can start by attending the Civil Rights Film Series. Screenings are 5:30 to 8 p.m. Wednesdays through winter term in room 205 in the Health & Wellness Center.

Learn more about the Sociology Department by visiting the website.

March 1 A Good Day to Die