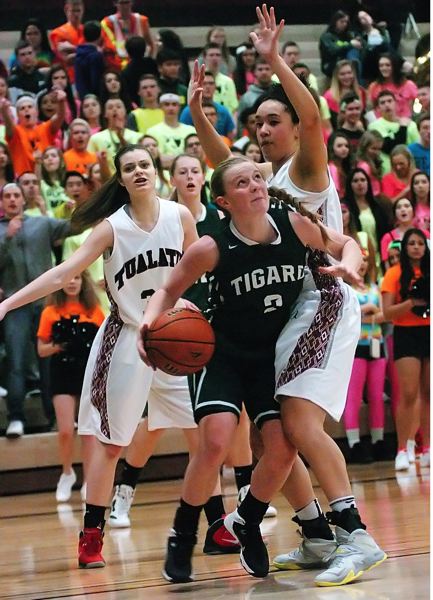 Add in a Tiger.

Put them together on the same team.

Heck, put them all on the court at the same time.

What do you get? A renewed rivalry?

Nope, you get those rivals working together, having fun and providing a spark.

And the Western Oregon University women’s basketball team is benefitting from it.

“I’m definitely seeing improvement,” said Miller, who is the veteran of the local trio, as she’s in her third season on the Western Oregon squad. “We’ve got a good team, and I’m looking forward to the second half of the season.”

“I’ve had a lot of fun here,” said Heugly, who is her first year on the Western Oregon team.

Western Oregon is off to a 6-9 start to the season, which includes a 2-6 mark in Great Northwest Athletic Conference play. But the local trio, among the statistical leaders for the Wolves in many categories, gives the team plenty of hope for the rest of the season.

Boschma, a 5-foot-8 sophomore guard, is fourth on the team in scoring with an 8.7 average. She also leads the Wolves in steals with 17.

“As a guard, I consider myself a leader — because I’m pretty loud,” Boschma said with a laugh. “And I’m a hype man out there.”

Miller, a 5-11 junior forward, is third on the team with a 10.1 scoring average. She also leads the Wolves in rebounds with a 5.9 average, and she’s tied for the team lead in blocked shots with nine, while also shooting at a .864 clip from the free-throw line.

“I’ve got a leadership role, but I’m not as loud as Kaylie,” Miller joked. “We’re small this year — really small. So I try to make sure we all block out on rebounds.”

“Coming off the bench, I like to get things going,” Heugly said.

Miller and Heugly, both 2014 Tualatin High School graduates, shined playing together in the front court for the Timberwolves. Heugly was a first-team All-Pacific Conference selection as a senior, while Miller garnered second-team all-conference honors.

But, on national letter of intent signing day, which they did together, Miller and Heugly went their separate ways, with Miller signing with Western Oregon, while Heugly signed with Blue Mountain Community College in Pendleton.

Meanwhile, Heugly was lighting things up at Blue Mountain.

As a sophomore at the school, she scored at a 21.2 average, ranking fourth in the Northwest Athletic Conference, while ranking seventh in the conference with an 11.3 rebounding average. Heugly also earned the NWAC Academic Excellence Award in both of her seasons at the school.

And, following her two years at Blue Mountain, Heugly had another choice to make, as she was looking to transfer to a four-year school.

Miller knew where she hoped her former Tualatin teammate would end up.

“I always had a little hope that she’d come here, and we’d play together again,” Miller said. “I knew how she played, and I knew she’d help us. And we’ve got the same background.”

Along came a Tiger

Boschma, coming off a strong 2014-2015 senior season at Tigard, where she was a second-team All-Three Rivers League selection, was looking to make her college choice, leading to a visit to Western Oregon.

“I knew that Jasmine was there, and I’m not supposed to like her because she’s from Tualatin,” Boschma said. “But it turned out that she’s a lot of fun.”

“I didn’t like Tigard,” Miller said. “And it was a little awkward at first, but she made it easy.”

Last year, as a Western Oregon freshman, Boschma scored at a 4.7 average while also pulling down 3.1 rebounds a game.

On the same team

The two former Timberwolves and the former Tiger often are all on the court together for Western Oregon this season.

Only, now, they don’t see each other as rivals, but, instead, they share a common bond.

“We decided to come together for TTSD,” Boschma said, referring to the Tigard-Tualatin School District. “Sometimes, on the court, Jas and I will look at each other and say ‘TTSD rocks.'”

“It was good when Kaylie came here,” Miller said.

“It’s fun when we’re all out there together,” Heugly said.

While Boschma, Heugly and Miller all excelled at the high school level, playing college basketball was something totally different.

“I had to get used to the faster pace,” Boschma said. “It was so much faster than high school. In college, it’s a bunch of all-stars out there. You have to work harder.”

“In community college, the pace is faster and the girls are bigger,” she said. “I was able to do pretty good there. But here, it’s a whole step up.”

There looks to be a definite local connection going on at Western Oregon University.

“Western Oregon is such a great school, and a great community,” Miller said. “They love the athletes here. It feels like family.”

The local trio is holding out high hopes for the Western Oregon women’s basketball team, both for the rest of this season, and beyond.

“We’ve got the whole second half of the season,” Boschma said. “We want to get a lot more wins, and get to the conference tournament. I think we can do it.”

“The whole thing for us is to get better every day,” Heugly said. “I think we can be pretty good for the rest of this year, and next year is going to be really exciting.”

The Wolves return to action today (Thursday), when they face Central Washington in a conference game starting at 7 p.m. in Ellensburg, Wash. On Saturday, Western Oregon will play Northwest Nazarene in a conference contest starting at 2 p.m. in Nampa, Idaho.

The Wolves’ next home game will be next Thursday, when they host Western Washington at 7 p.m.

Published by TheTimes
By Dan Brood