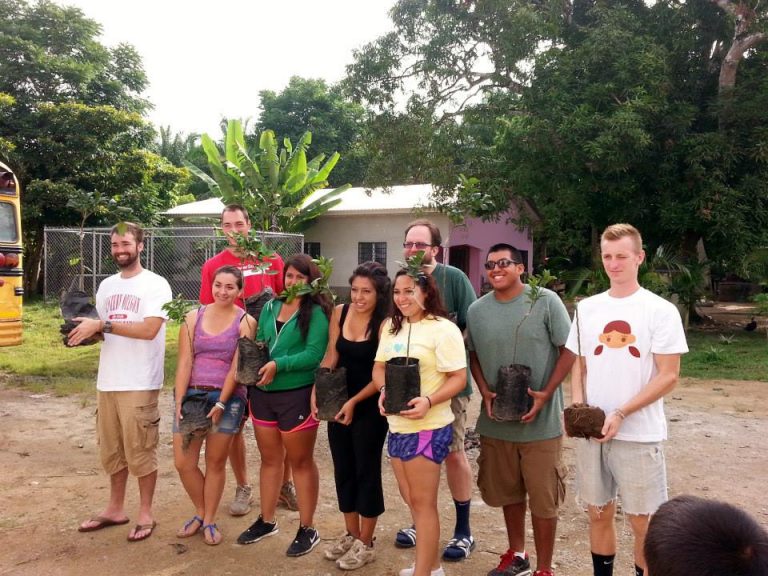 Not so long ago, he was a sophomore struggling to gain a foothold on a career path. With the help of patient and supportive WOU instructors, he finally navigated his way to a degree in a field he’s passionate about: public health. Now, six years later, he has become the teacher, providing young men with the tools to forge their own path, even when that requires emotional strength.

Cox ‘14 facilitates classes in two Grants Pass public high schools that teach boys to have healthy relationships and to use constructive communication skills. The program’s ultimate goal is violence prevention, but Cox takes the big-picture view.

“The biggest thing that kids are going to use after high school is how to communicate and build relationships with people,” he said. “It’s all connected: social learning, fighting gender stereotypes, preventing self-destructive behavior. We try to interrupt cycles of violence.”

The program is presented by the Women’s Crisis Support Team, a pioneering Josephine County non-profit that works to fight domestic violence and sexual assault. The agency puts an equal focus on violence prevention, and that’s where Cox comes in. His team’s work is partially funded by a rape prevention-education grant from the Centers for Disease Control and Prevention.

“Most agencies, because of budgeting, have to focus on just being reactive,” he said. “The Women’s Crisis Support Team has been doing prevention lessons for teens for 10 years.”

Cox says students are excited to come to his weekly classes and the young women’s version taught by another facilitator. Still, the subject matter can be difficult, and convincing young people requires patience.

“Some of the kids, they come from homes where they’ve been told the same things their whole lives,” he said. “They have no idea another viewpoint is even possible. We teach them that instead of responding in anger, they can confront someone in a way that is kind, appropriate and clear.”

Conflict resolution skills are valuable to people with all sorts of backgrounds said Cox, who grew up in Amity, a rural Oregon town not far from Western Oregon University. Good communication is easier for people who have a strong sense of self, something that Cox admits forced a lot of self-reflection on his part.

“It can be hard to stand up for yourself and be willing to talk to someone who doesn’t agree with you,” he said. “I grew up in a loving family. I was very fortunate. But I didn’t defend people. I didn’t get involved. Eventually I learned that everything is connected, and by listening to and supporting others, we help ourselves and everyone else.”

Cox credits Western Oregon University’s faculty and staff with teaching him that lesson. After trying “at least 10” different majors, he finally settled on community health. He’d been dealing with the suicide of a close personal friend, and when he heard in class one day that public health works toward preventing tragedies and injustice, the clouds started to lift.

“I was having a hard time and even thought about dropping out,” he said. “But when I heard about the prevention aspect of public health, it clicked. If that hadn’t happened, I don’t know where I’d have ended up. It led me down a completely different path.”

After graduation, Cox worked at Camp Silver Falls in Silverton at the suggestion of community health instructor Shawn Sellers. The pay was lousy but the experience was transformative, said Cox, whose counselor nickname was “Feather.”

“Kids have the secret to life figured out. They are excited about so many things,” he said. “Even now, I try to appreciate the simple moments and keep my sense of wonder.”

An important summer camp lesson was about having the strength to be yourself. That message has informed everything Cox has done since leaving that job, from his two years working in AmeriCorps to his current position teaching young men about masculinity.

Looking back at his time at WOU, Cox credits two factors for his success in his field and in life. The first is the faculty in the health department.

“The teachers in public health were my biggest mentors. Just their dedication and passion set such an example,” he said.

Sellers, the instructor who encouraged him to apply at summer camp, is thrilled to have Cox as a leader in the battle against misogyny, violence and abuse.

“What Eli gets is that unhealthy relationships are the basis of all these problems,” Sellers said. “We need people like him from a small town who can speak that language. He gets to be one of the pioneers. What a cool thing! If anyone is going to make things happen, it’s Eli.”

The second key ingredient in Cox’s recipe for success was service learning. In his time at WOU, he took several trips abroad to help indigenous people with basic services.

“The people on those trips became my community, which was what I needed,” he said. “I loved being actively engaged, getting to see the direct impact of our work. It really helped me get a better understanding of myself and of life.”

That self-awareness is a vital internal resource as he teaches young men about masculinity. And he sees progress already.

“In the hallways, it’s a lot harder for the boys to be themselves, compared with the safe environment of the classroom,” he says. “But I hear the kids (from the young men’s and young women’s classes) talking, and they are much more advanced conversations than when I was in school.”

Did Cox ever think he would find himself at this stage, serving as a mentor himself in the preventive public health field?

“You know, my mom always said I’d be a good teacher, but I didn’t want to stand in front of a classroom,” he said. “But it doesn’t have to be like that. Any moment can be a teachable moment. It can just be a conversation. We’re all just human.”

To learn more about the Community Health Education program within the Division of Health & Exercise Science, visit the CHE website. Check out Cox’s “man box” teaching handout and his Dance to Dallas fundraising video.