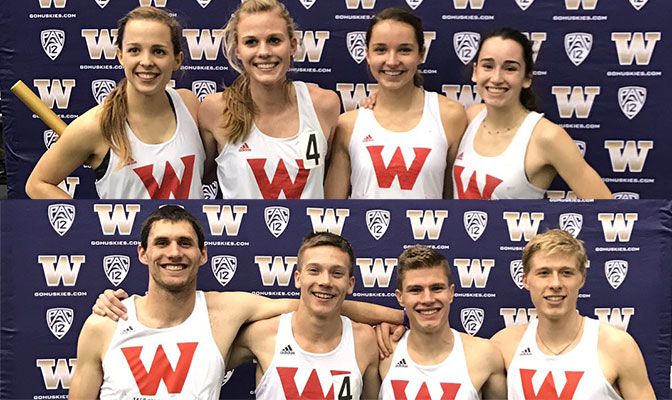 PORTLAND, Ore. – The Western Oregon men’s and women’s track and field teams combined to break two GNAC records and five school records at the University of Washington Invitational over the weekend to claim this week’s Red Lion/GNAC Team of the Week honor.

David Ribich broke the WOU and GNAC records in the men’s mile, finishing in a time of 4:02.30. The mark is the GNAC’s first NCAA automatic qualifier in any event this season and is currently Division II’s leading time by more than four seconds.

Ribich promptly helped break another GNAC record with an NCAA automatic qualifier in the men’s distance medley relay. Along with Dustin Nading, AJ Holberg and Josh Dempsey, the four finished the relay in 9:45.45. It is the best time in Division II this season and broke both the GNAC and Western Oregon records.

Kennedy Rufener put her name in the Western Oregon record books with an NCAA provisional qualifying mark of 17:24.07 in the 5,000 meters, setting the WOU record and pacing the GNAC this season.

Suzie Van De Grift put her name on the national lists for Division II track and field in two events. The junior recorded a time of 2:14.10 in the 800 meters, which is tied for the No. 16 mark in the nation. It was her personal best and the third best time in the 800 in school history.

Van De Grift was also a part of the women’s distance medley relay team that recorded a time of 12:05.24, which is the No. 8 time in Division II this season. She was joined on the relay by Megan Rose, Olivia Woods and Nicole Maurmann in the WOU record-setting performance.

The fifth school record was set in the 4×400-meter relay. Grayson Burke joined Rose, Van De Grift and Woods in the record-breaking time of 3:56.73. The time missed the Division II provisional qualifying mark by just four-hundredths of a second.

In the men’s 800 meters, Josh Dempsey took sixth place overall with a time of 1:52.05, beating three Division-I runners in the section by more than a second. Earlier this season, Dempsey recorded a time of 1:51.35 in the 800, which ranks fourth in GNAC history.

The Wolves will be competing once more before the 2017 GNAC Indoor Track & Field Championships when they travel to the Husky Classic in Seattle, Wash., on Feb. 10-11.