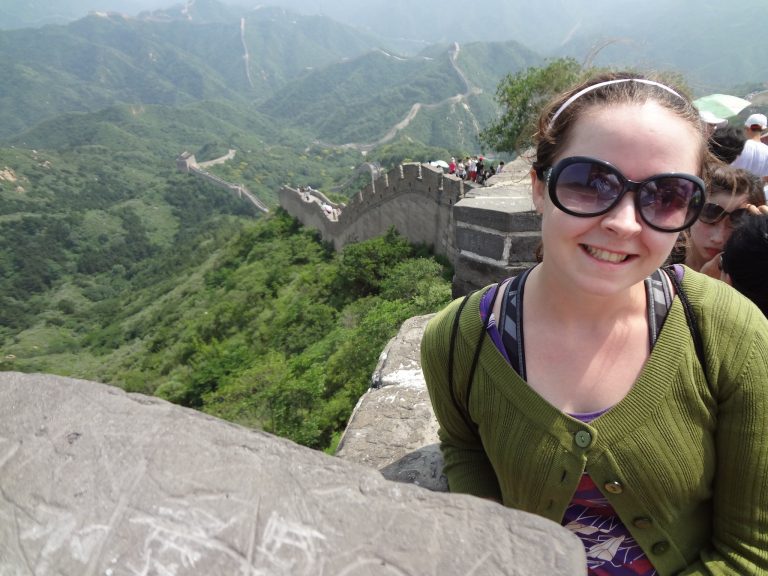 Most of what people need to know about 2010 grad Laura Gage’s world view can be found in the title of her YouTube channel: “Laura the Explorer.” She’s a world traveler, and she attributes her adaptability to her time at Western Oregon University.

Gage has taken the knowledge gained during courses for her anthropology major and applied them in each of her destinations. It’s a good thing, too, because her first opportunity came barely 11 days after graduating from WOU. Just a month earlier, she had landed a position teaching English in China, but when she started life in a foreign country, she struggled with culture shock.

“Anthropology helped me figure out what was going on,” Gage said. “It was a chance to use some of the cool concepts I learned in class.”

Gage credits an appreciation for different cultures and the dynamics of human interaction as the keys to her success in Dalian, China, a city of 3.3 million people on the Liaodong Peninsula where she now lives.

“Many people get to China and have such a hard time. They only last a few days or weeks,” she said. “My experiences have increased my adaptability and understanding.”

Gage admits it has been a challenge, but she’s stuck it out for seven years. Now, she’s just about to finish up a master’s degree in Applied Chinese Linguistics at Dalian University of Foreign Languages.

“When I first got here, it was very intense,” she said. “There isn’t the same American approach to rules. You have to constantly defend yourself. I think about it like the California Gold Rush. It was tough, but if you could hack it, you could do well.”

And do well she has. Gage has learned to speak Mandarin at nearly the highest level. Her classes are taught in Mandarin, and she’s writing her master’s thesis about differences in English and Mandarin idioms. After she’s jumped that educational hurdle, she’s got her eye on law school.

In addition to continuing her education, she uses her place in China as a home base for extensive travels, including India, Egypt and the Philippines. She said she’s always on the lookout for a place that’s inexpensive to access and interesting to visit. And she never lets a language barrier keep her from exploring new places.

“There are people who speak English everywhere I go,” she said. “You’d be amazed. Even in places where most people are illiterate, they still speak seven languages. Europeans are really competitive about their English skills, and in some countries, like Chile, you have a hard time getting a job if you don’t speak some English.”

Teaching English in China has opened a lot of doors for Gage. Her education, living expenses and fees are covered in full as long as she is a student.

“That part is like a magical fairy land,” she said with a laugh. “They make it so easy for you.” She was also able to pay off most of her student debt from WOU during her time in China.

Of course, Gage doesn’t hesitate to share stories about struggles in China, a country with a global reputation for oppressing citizens. She has faced difficulties with the same tenacity and humor she’s relied on to get her this far.

“You have to be able to say ‘OK’ and move on,” she said. “There’s a lot of conflict in this culture. I have screaming matches all the time. People hit me with their cars. You have to push people out of the subway car or you won’t be able to get off. If a guy lights a cigarette in an elevator, I have to say ‘Hey, Man, that’s not cool.’ No one would ever call someone out like that in America.”

Again she reaches back to a concept she learned at WOU, this one called “uncertainty avoidance.” Westerners for the most part have a low tolerance for uncertainty. Gage likes to have a schedule and to know what’s coming next. But Chinese life is rife with daily uncertainty.

“I’d get a call in the morning where someone tells me, ‘Today is a holiday. You don’t have class today. Because of that, you will have class Saturday,’” she recalled. “But I’d already made plans for Saturday. Why didn’t anyone tell me this earlier? It’s frustrating. But, again, you just have to move on.”

She’s thrilled that her ability to “negotiate” – her term for aggressive self-advocating – has improved to a point where she is comfortable speaking up.

“I feel sorry for the first car salesman who tries to sell me a car when I’m back home,” she joked. “I’m much more comfortable in the face of conflict.”

She is unsure when her journey will bring her back to the Willamette Valley for more than just a visit. She’s still in touch with several of her anthropology instructors, and she updates them often on her adventures. She also has been accepted to the law school at Willamette University in Salem. Both of her parents are attorneys.

“I’d like to practice international law,” she said. “I would like to build a cultural and legal bridge between U.S. companies and China. It’s so easy to get frustrated, and I think understanding both cultures is a rare thing that I could help with.”

Gage, who graduated from Sprague High School in south Salem, confessed that she only planned to stay at Western Oregon University for two years before transferring to University of Oregon. But in the recurring theme of her life, things didn’t go according to plan.

“I fell in love with Western,” she said. “I played water polo. I played the tuba. I loved the fact that you didn’t have to be pigeonholed. At University of Oregon, if you wanted to be in the orchestra, you’d have to be a music major and be one of the best players. At Western I got to do awesome things, but they didn’t mean I couldn’t explore other interests.”

That’s how she discovered AHA International, a study abroad program that took her first to Spain in 2007 and birthed her love of travel. Years later, she still recommends the experience to all WOU students, including anthropology majors.

“My advice to anthropology majors who are about to graduate would be to forge your own path,” she said. She suggests students look for a niche where they can thrive, whether it is becoming an expert in a place or specializing in a particular culture.

Isidore Lobnibe, an assistant professor of anthropology, was Gage’s thesis adviser at WOU. He’s impressed by the way Gage has grown and thrived since graduation, and he seconds her advice about exploring post-graduation options abroad.

“Laura is curious and courageous,” he said. “I would encourage others to teach and travel, too. Some of them are. They are getting out of the bubble. A few have gone to Ghana or Korea.”

Until she learned about the option to teach in China, Gage had no idea what she’d do after graduation. But her leap of faith to Asia provided her with a path forward. That’s why she advises graduates to think twice about taking a job or entering graduate school immediately. Her motivation to move in 2010 wasn’t quite so far-sighted, she admits. The economy had tanked and the job prospects looked slim. Plus, she thought her dad wanted her out of his house – a misconception they laugh about now.

“In anthropology we learned that migration is based on a push-pull relationship,” she said. “My push was the bad economy, being unprepared for the future and having (I thought) no home. The pull was travel and the money I could make in China.”

It seems she made the best decision she could, though it seemed a little far-fetched at the time. But despite the challenges of living in a different culture, she don’t regret choosing adventure.

“Every day in China is the worst day and the best day of your life,” she said.