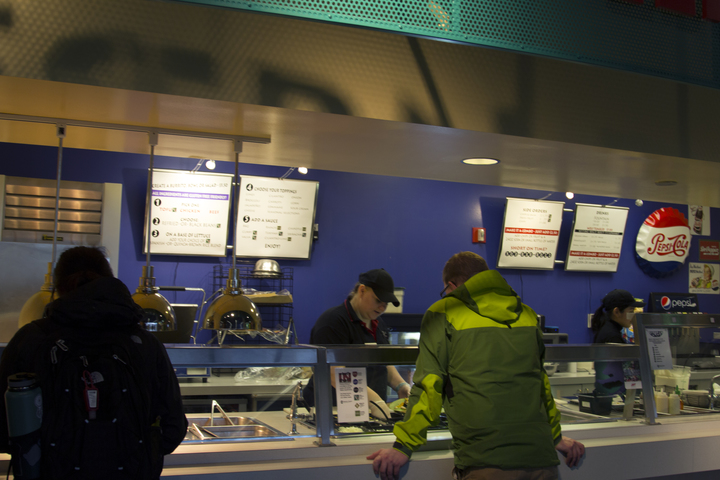 To say Albert Worotikan hit the ground running in his new job as director of campus dining would be a serious understatement. He was sharing his ideas for improvements before he even landed the post.

“I was showing them plans for my ideas during my job interview,” he said with a chuckle. “I think that’s what they liked about me. I was ready to go based on what I’d seen before at Oregon State.”

At that university down the road, he had been the general manager of one of three large dining halls on campus. He saw first-hand what it takes to keep thousands of college students fed and happy, and he wanted to bring many of those concepts to WOU. Most will require a remodel of Valsetz Dining Hall, a project that still is in the feasibility stage. But Worotikan is optimistic the renovations will be approved, and he’s got blueprints ready to go.

“Until then, I can only adjust little things,” said Worotikan. “But even some of those make a big difference.”

He started with aesthetics in the seating areas in Valsetz. He removed tables and chairs where the space was too crowded. LED lightbulbs replaced incandescents to lighten up windowless rooms and save energy. He created cozier seating nooks by adding upholstered furniture in strategic locations.

The goal, he said, it to create a place where students are comfortable enough to hang out for a while. He worries too many students are getting food and immediately taking it back to their rooms, which does not support the goals listed in the campus dining mission statement.

Worotikan didn’t just alter the look of the dining hall. He also worked with the staff to create a more professional working environment. That meant uniforms and name tags for all food service workers, no matter which eatery they work in.

“If you want people to act professionally, they have to dress that way,” he said. “Now, they wear black pants and nametags (along with their WOU shirts).” Each worker was given an allowance to purchase non-slip shoes for safety and comfort. He said they also have been through CPR and first aid training, and there’s a new commercial laundry service that handles towels, aprons and other kitchen linens.

The driving force behind Worotikan’s vision is the mission statement for the housing and dining department, which was already in place when he arrived. The university focuses on sustainability, community, wellness, support, inclusion, learning and communication. He has plans mapped out to address all seven core values, and students likely have noticed some changes already.

For example, on the inclusion front, Worotikan plans to add new global cuisines in Valsetz such as pho, curry dishes, expanded Mexican options and even sushi. Ingredients such as meat, cheese, baked goods and even spices come from vendors between Portland and Eugene. The beef is grass-fed, and the chicken is free-range. More options are available for people with food allergies or preferences.

In January, Valsetz got a redesigned front entry, a rotisserie grilling organic chickens and a new stir fry station where diners can select ingredients and have them grilled along with house-made sauces, which are gluten free and vegan.

“Before, the only thing vegans could eat was salad,” Worotikan said. “Now, we have many more choices for vegans, vegetarians and people who like gluten-free. It only takes some minor changes to give them more options, so why not do that?”

The department created icons to designate menu items for diners with food preferences, and these are displayed on the wall behind the counter in restaurants such as the Western Deli in Werner University Center. Worotikan invites students with extensive food allergies to contact the office so the staff can work to create a dining solution.

“Letting students know that we care about their preferences helps build trust,” he said.

Student satisfaction is something he takes very seriously when deciding among potential changes. For example, in mid-January dining services opened a late-night, convenience store-style outlet in Valsetz where students can get snacks and personal items until 10 p.m. Currently, the dining hall closes after dinner at 8 p.m. most nights, even earlier on weekends.

“The convenience store has received a lot of compliments from students. They can get products from toiletries, medicine, candies, ice cream and chips without having to drive or walk to town,” he said. “(Trips into town) can get expensive.”

The longevity of students’ food budget is just one of Worotikan’s concerns. His plan is also heavy on eco-friendly practices. The dining hall and its many remote locations already compost food. They use compostable serveware and recyclable drink cups and lids. Next up is introduction of reusable to-go containers.

“We call them ‘reWOUsable’ containers,” he said, laughing. He pulls out a red clamshell made of durable plastic. “Each student will get one, and they can take them home just like they do now (with paper containers). When they are done, they can rinse them out and return them for us to wash.”

There’s already been a photoshoot with Wolfie. In the shots, the mascot chucks a red clamshell into a dropbox to demonstrate how easy the containers are to use and return.

Although Worotikan’s changes to the seating areas, menu and staff have been incremental, they have not gone unnoticed. Students eating lunch recently in The Summit said they’ve seen a difference.

“The food looks fresher to me,” said sophomore JD Queja. “The lettuce and tomatoes look better. I just had a turkey burger (from the Wolf Grill) and it was really good. It seems more like home cooking.”

Faculty and staff, too, are choosing on-campus dining when the opportunity arises. Susan Griffin, an academic program coordinator, and Elayne Kuletz, an instructor in the teacher education division, recently had lunch together in the WUC. They both enjoyed their meals and felt the price was right for the quality. Although neither of them eat vegan or gluten free, they appreciate that the information is available for diners.

“There are a lot of people who need that,” Griffin said.

Worotikan has plenty of new ideas still up his sleeve. If the renovations are approved, he would like to use much of the space currently occupied by unused conference rooms to expand and improve the food options in Valsetz.

He envisions transforming the current stations – Wok-n-Waffle, Centre Stage, Deli & Soup du Jour – into full cuisine “concepts,” each with its own complement of professional equipment that can be used to make a wider variety of dishes on demand. He believes the changes will show both current and prospective students that diverse, healthy and sustainable foods are readily available at Western Oregon University.

“They are here for nine months of the year,” he said. “We don’t want them to get bored after three. We have to be creative.”

If Worotikan keeps up his current pace, there is little chance the offerings will get stale. Two weeks ago, a cold brew-coffee tap was added in The Press coffeeshop inside Hamersly Library. Up next on his wish list, in addition to the renovations at Valsetz, is an online order system.

“People could just use their phones to see their meal plan balance, check prices on things and order right there,” he said.

In the meantime, Worotikan will focus on small tweaks and innovations. He said he gets new ideas every day.

“I have a lot of plans. We’ll have to watch to see what happens,” he said.