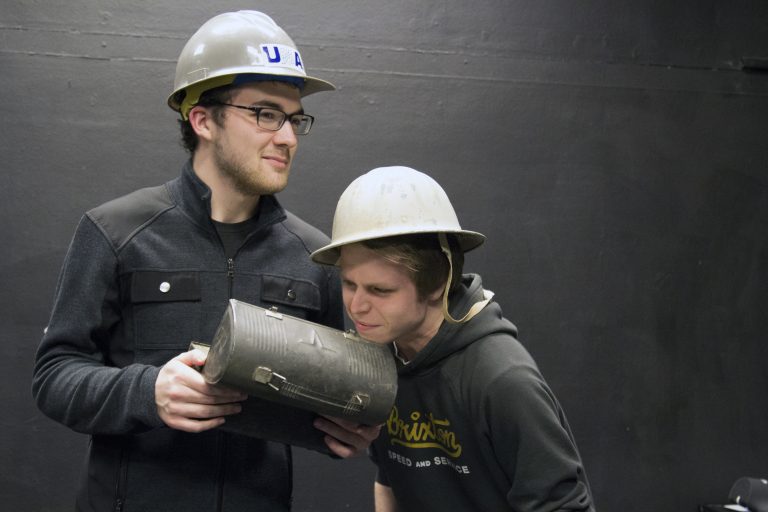 Director Kent Neely describes All in the Timing simply as a “ridiculous comedy.” The title, which comprises six short plays, doesn’t lean toward social commentary, parody or satire. It’s just pure fun with a heavy focus on wordplay, absurdity and the examination of personal relationships, all set in a comedy club-type atmosphere.

“The interactions and relationships are strained and weird, but we might just recognize ourselves in them,” Neely said.

This is particularly true for the first play, Sure Thing, which features a man and a woman having an awkward conversation in a cafe. The man tries to be suave, but he keeps saying the wrong thing. A bell sounds, and he tries again. Because the experience of making a bad first impression is nearly universal, some of the missteps may seem familiar to the audience, allowing them to enjoy each cringe-worthy moment.

The complicated pacing and use of language in all six scenes have been challenging to the student actors, but Neely said they’ve been game for trying multiple approaches. Just three men and three women fill all 17 roles in the play, and they perform tricky word play, physical comedy and change clothes between scenes right on the side of the stage.

“They work well together,” Neely said. “It’s a really smart, creative cast with good energy. They understand the importance of working as a team.”

All in the Timing by David Ives was first performed in 1993 at the off-Broadway theater Primary Stages. The original collection included just the six core one-acts, but there are eight additional plays that also may be included, depending on the intent of the director. Neely chose to stick with the original six for several reasons.

“We didn’t want it to get too long,” he said. “Plus, the cast can be small and the set is really simple, especially since we are in the smaller theater.”

Staging the play in a comedy club setting was the director’s idea. It is not part of Ives’ original format, but Neely, who plays the club announcer, believed it could make the atmosphere more comfortable.

“The Studio Theater seats about 50, so it’s intimate,” he explained. “This way, you get a context. If anything, it can loosen people up. The setting allows you to settle into the humor’s cadence.”

Sure Thing, featuring Zach Stearns and Mindy Mawhirter, is the fast-paced opening play in which strangers in a café attempt to make a connection despite constant gaffes on both their parts. Stearns said the complicated pacing and quick adjustments throughout the whole play were tough at first.

“These plays are for sure tricky,” Stearns said. “All the puns and references were sometimes hard to catch before we actually got to rehearsals and started really working with (Neely).”

Some of the one-acts require a degree of physicality in addition to linguistic acrobatics. In Words, Words, Words, the three featured actors play chimps named after famous authors (Jonathan) Swift, (John) Milton and (Franz) Kafka. They are put in a room with the expectation that, eventually, they will write “Hamlet.” Unfortunately, they don’t know what “Hamlet” is.

In the play Variations on the Death of Trotsky, the Russian revolutionary — with an ice ax stuck in his head all the while — must repeatedly die in dramatic fashion after finding out he’d been killed the day before. The ax aspect created a challenge for costume designer Carina Ramirez because it had to be sturdy and visible at the same time.

“The main part is made of foam, sanded down and painted before being attached to the wig,” Ramirez explained. “It wasn’t a difficult build, but it was time consuming. In the end it was worth it.”

The three other plays included in All in the Timing are: Mere Mortals, Philadelphia and The Universal Language, all of which are based around alternate realities and false premises.

Neely said he’d put All in the Timing at a PG-13 rating, as there is some adult language and situations. He is eager to showcase the talent of the six actors, who are all theater majors. Stearns said his favorite aspect of the production is the opportunity to reach outside his acting box.

“Some of the characters I get to play are right in my comfort zone,” he said. “Other ones, not so much. I really love working in a small cast as well, since it lets all of us show some range.”

To learn more about the Theater Department at Western Oregon University and its distinctive MFA program, visit the theater/dance website. You can also find the production schedule.

Tickets: $14 for adults, $8 for students and $10 for seniors and WOU faculty and staff.