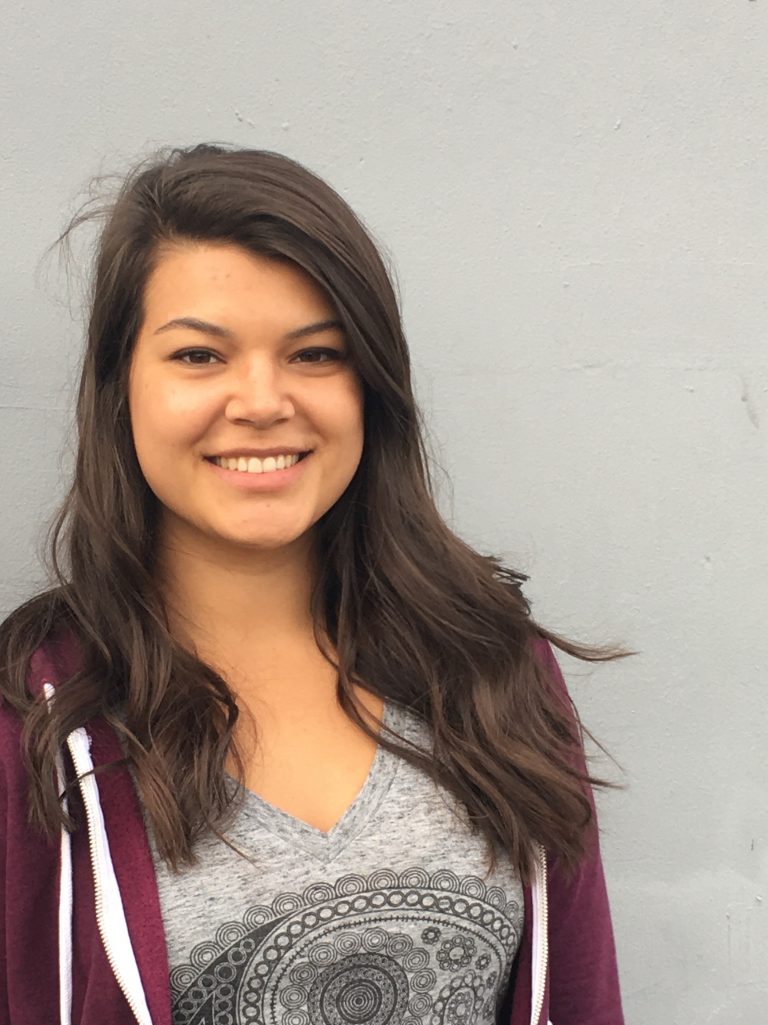 If you’d asked Alli Yamnitsky ’17 during her freshman year at Western Oregon University what she saw herself doing after graduation, she probably would have said she’d be a history teacher. The Corbett High School grad lists history among her passions, along with environmental studies, her minor.

But fate steered Yamnitsky in a different direction after a Forest Service internship on Mt. Hood and a sophomore-year geography course got her excited about a new field.

“I changed my major in winter term of my sophomore year,” she said. “I thought about earth science, but (Assistant) Professor Shimizu told me all about GIS.”

Geographic Information Science, a program within the Earth & Physical Sciences Department, melds technology and mapping, spatial analysis and images. The mixture of disciplines was a sweet spot for Yamnitsky because it carried the added bonus of multiple career possibilities.

“I thought the tech industry aspect would make me more marketable,” Yamnitsky said. “But it’s just really cool to learn, too.”

By the time she got to the middle of her junior year, she was on the hunt for internships. She wanted to spend the summer before her senior year getting work experience in the field, possibly finding a source for her senior project. She applied with the land management department and the state’s GIS program, among others. Her minor adviser, Politics, Policy and Administration Professor Mark Henkels, served as a reference. Unfortunately, she never heard back from the state. She worked that summer at Monmouth Fitness Club instead and prepared for her senior year at WOU.

Then, out of the blue, the Oregon State Lands Department contacted her in late October 2016. The agency had received some special funding, and it was looking for temporary workers to help with a detailed river-mapping project.

“It was like the stars aligned for me,” she said. “I feel so lucky.”

So far, Yamnitsky’s duties have focused on gathering historical data about the state’s waterways and river boundaries. It’s slow going, she said. Recently she’s been wrangling aerial photographs that the Army Corps of Engineers took in the 1930s. The photos are scanned and converted into digital information that can be used in GIS. The team’s search for information reaches much further back than that, though.

“Last week we were looking at Lewis and Clark’s diaries,” she said. “They have hand-drawn maps in them that give us clues about how the Columbia looked back then.”

The river-mapping project could have far-reaching implications, both for the student and the state. Yamnitsky said the job is guaranteed through about November 2017, and it could open all sorts of career doors to her beyond that. She sometimes can’t believe she stumbled across this opportunity.

“This work blends all my favorite things: history, then environment and GIS,” she said. “I thought I was going to get stuck doing something in transportation or something, so focusing on the 1850s to now is cool. It’s funny, actually. I took a cartography class and thought I’d never use it. Now I use it every day.”

There is talk that the state mapping project will be extended. Yamnitsky estimates it could take 10 years to complete the task. Eventually the information gathered in the project will be made available to other state agencies, such as the Oregon Department of Fish and Wildlife, which is fighting to preserve a dwindling salmon population, or other departments that deal with dredging or property rights. In the meantime, Yamnitsky’s making as many connections in the field as she can, including with WOU faculty members.

“The relationships that I’m building with professionals is invaluable,” she said. “My friends at bigger colleges are not as close to their professors. It makes me more confident because my teachers know what to push me toward.”

Adviser Henkels believes Yamnitsky will go far in the industry, and not just because she is intelligent and eager to learn.

“People sense her enthusiasm and the energy she brings,” Henkels said. “You feel like things are going to happen. She’s curious and takes feedback really well.”

GIS is a tool with wide-reaching implications. It’s used by timber companies, environmental agencies and even criminal justice departments, to name a few. Yamnitsky has her eye set on a future job that would combine her GIS and environmental studies training, such as tracking sea levels or mapping crop distribution.

“When people ask me what I can do with my degree, it’s pretty fun to have a response for that,” she said. “People have no idea about geography. But they should understand; geography is a broad major that encompasses the environment and how humans are treating it right now. Everything is related.”

Yamnitsky has the right temperament and vision to be a force for change in the world, Henkels said.

“Idealism is important in environmental studies,” he said. “Alli is not jaded. She understands the problems we face and believes good can be done. She acts.”

To learn more about the GIS program and how the technology is used, visit the program’s website.

Do you have a job already lined up for after you graduate from WOU? We’d like to hear about it in the comments below!