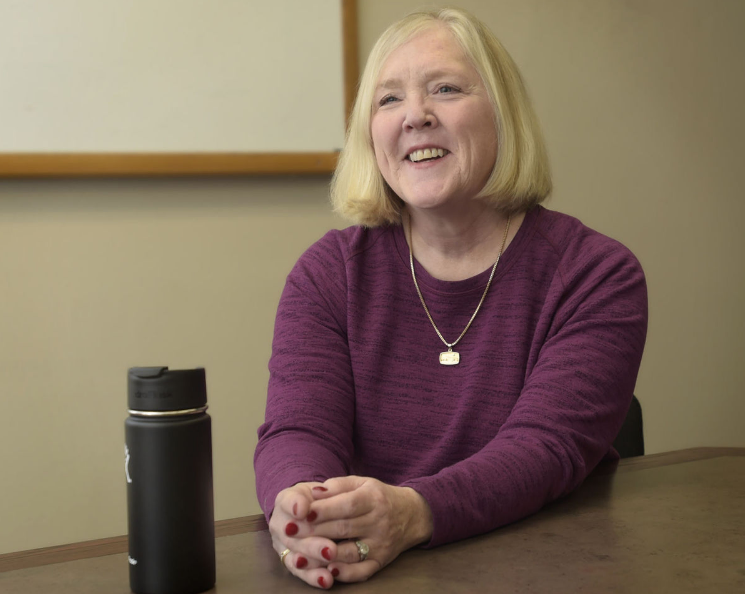 When Glenna Hughes talks about her new job as the Linn County Public Health Program manager, she cannot help but smile. It is, she said, a perfect combination of her key interests: sociology and health care.

Hughes, 58, takes over the role held for many years by Pat Crozier, who retired at the end of 2016.

Hughes brings extensive experience to the post, having previously served as operations manager at Samaritan Pacific Health Services. The Cave Junction native, who now lives between Albany and Corvallis,  said she enjoyed her years with Samaritan.

“I was a pharmacy technician at one time,” she said. “It was the perfect job at the right time. I started as Samaritan began growing the outpatient side of pharmacy and developing its own health care plan.”

Hughes, who has a bachelor’s degree in sociology from Western Oregon University and a master’s degree in health care administration from Pacific University, says her new job came at the right time, too.

“I had always wanted our kids to have a good home life,” she said. “Now that they are on their own, I realized I have a chance to do things for myself. I started to look around and didn’t even know this job was closing in November. It is a great fit with my sociology background.”

“I am accessible,” Hughes said of her management style. “I want everyone to feel like they are able to see me, and I want to be a part of the team. I’ve spent the last three weeks meeting with every staff member at least once.”

Communications is a key factor in any operation, she said.

“I need to know as much as I can about issues to make decisions and my staff needs to have as much as information as they can to operate efficiently and effectively,” she said.

Hughes also worked part-time as an education facilitator at Western University of Health Science’s COMP-Northwest in Lebanon. She helped new physicians learn how to communicate more effectively and to work with pharmacists, RNs, CNAs and others.

Hughes said she knows the job isn’t going to be easy and that transition is a bit frightening for both her and staff.

“I enjoy working with people and making things happen collaboratively,” Hughes said. “I believe what we do should be a team approach every day. I never thought that I could be involved in Public Health in this way. It meets both of my key interests.”

“I started getting calls from everyone telling me she would be a good fit,” Moore said. “I can recognize talent and put it where it fits and then get out of the way, and that’s what I am going to do.”

Moore said Hughes and her staff are going to experience great change in how health care is delivered, both from a private and public stance.

“We are going to move away from clinical health care delivery and become more patient-centered provider oriented,” he said. “That may likely mean that Public Health staff members will go into homes and actually see the environment in which patients are living.”

Moore said it will be much like the country doctors from decades ago.

“We will see their living environments and maybe pick up hints of possible drug use or domestic violence issues,” he said.

Hughes added that it is important to learn about the barriers people have to overcome to access health care because it assists in the development of long-term health care plans.