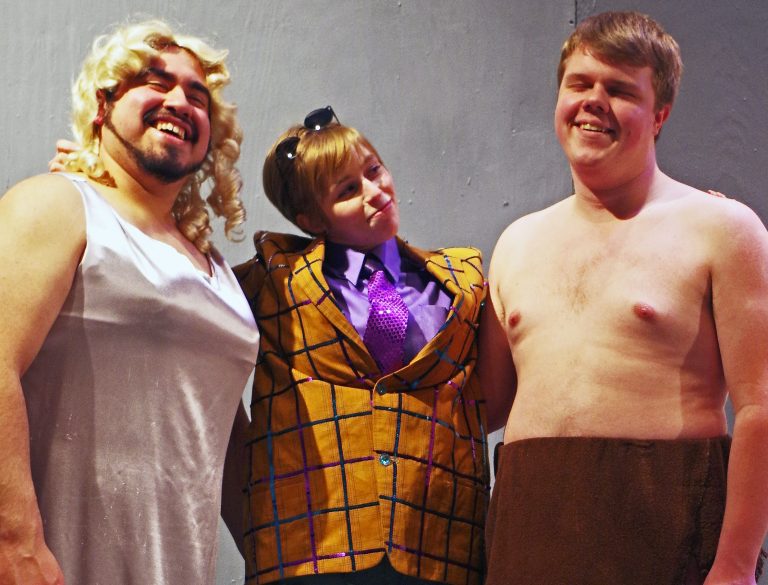 “This play is a lot of fun,” he said of Ken Ludwig’s comedy. “It’s a wacky blend of behind the scenes (of film-making) but also history. There are many real, historical people in the play. There’s a lot of truth in this fiction.”

Here’s a basic rundown of the era-bending plot: Picture the set of a struggling Hollywood film version of “A Midsummer Night’s Dream.” It’s 1934, and the Max Reinhart movie seems doomed to fail from the opening slate. Then fairies Oberon and Puck, straight from A Wood Outside Athens, are transported from their time to the movie set, where events seem strangely familiar. There’s an ingénue, a censorship crusader, a gossip columnist and many real-life stars, each with their own agenda and outsized performance.

“I chose this play for many reasons, but one of them is because it has a huge cast,” deChatelet said. “There’s a lot of opportunity for students. And I’m a big Shakespeare-phile.”

The mix of outrageous actors, performance styles and time periods is only part of the fun in “Shakespeare in Hollywood,” which was first produced in 2004. The play’s costuming is so significant, it almost becomes a character itself. With 15 cast members, it’s no wonder.

“This amount of costuming is not unheard of for a WOU production, but it is a challenge,” deChatelet said. “Some characters have multiple looks. They have their day clothes and their characters’ movie costumes. Some have evening gowns. The costumers have been very busy.”

Associate Professor and Costume Designer Sandy Hedgepeth has been leading the charge in the costuming shop, where a wall is covered in sketches of garb from various historical periods. A team of students has helped transform the visions into reality, and costuming professional from the Portland Opera also worked on the challenging project.

“This is, by far, one of the wackiest designs I have ever attempted,” Hedgepeth said. “There are fairies, Elizabethan costumes, elegant 1930s gowns, togas, Tarzan, donkey heads and Groucho Marx. It is hard to keep up, but it does keep us laughing. I am so proud of my students, and I think that they have produced a very fine product.”

The on-stage cast is heavy on male roles, with a scant handful of women’s parts. The fairy Puck, who can be played by any gender, is acted by Sarah Cotter, theatre major from Woodburn.

“She is a delight,” deChatelet said. “It’s just so cool to watch her. She played Puck in our own production of ‘A Midsummer Night’s Dream,’ so she’s well-acquainted with the character.”

He also notes the performance by JennyLynn Dietrch, who plays Louella Parsons. The Monmouth-native’s first language is ASL, so she’ll sign Louella’s dialogue while a voice actor (Katie Rule) provides the audible lines from offstage.

With the exceptions of Dietrch and Rule, all the cast members are theatre majors, and most are in the BFA program. The play allows the actors to test their chops in a wide range of dialogue challenges. In 1934, the film industry was just a few years into the era of talking pictures, so performances were theatric, with exaggerated movements and speech. Plus, there was the stylized cadence and grammar of the period. The director said students loved exploring different styles of acting.

“In this kind of comedy/farce, everything is heightened,” he said. “If people acted like this today, we would roll our eyes. To get a feel for that period, we watched the actual 1930s (Reinhardt) movie and ‘Hail Caesar,’ which really gave (students) a good inspiration.”

deChatelet gave the cast plenty of opportunities to try variations on their lines. Some are delivered in 1930s style while others are straight from the pages of Shakespeare. He gave students challenges during rehearsal, and they would embrace the melodrama.

“They were more than game,” he said with laugh. “They’d try something new, and then we’d adjust. Sometimes I even had to dial them back.”

The less sympathetic characters are the most overblown, adding to the hilarity of the play and serving as perfect foils. The young couple in “Shakespeare in Hollywood” plays their roles in a more contemporary style. The juxtaposition creates the desired absurd effect.

“This play, even just reading it on the page, made me laugh out loud,” said deChatelet. “That’s a good sign.”

Tickets are $14 for general admission, $8 for students with ID and $10 for seniors.