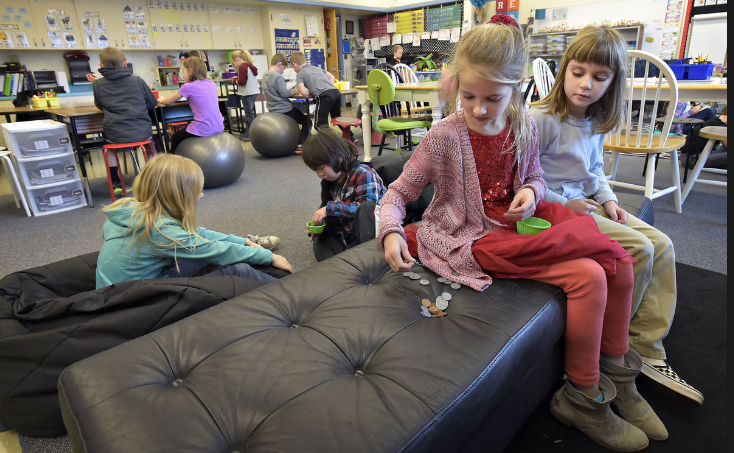 A couple of students lounged in bean bag chairs. Others sat in a small group around a coffee table in comfy chairs, while others lay on the floor on their stomachs looking at iPads as a steady din of conversation filled the room.

But if you looked a little closer, the students were on task most of the time — working on their math assignments and discussing them with their classmates, while a few who got ahead were doing extra practice in a math app.

The apparent chaos of the room was, in fact, by design, Hicks told the Gazette-Times: She has spent the school year replacing most of the standard desks and chairs in her room with an array of seating options for students, everything from kitchen tables and chairs to exercise balls and standing desks.

The classroom is an example of a larger effort in mid-valley schools to examine some of the basics of how classrooms should look. And Hicks is not alone: Schools in Corvallis, Albany, Lebanon, Monroe and Philomath are offering a variety of alternative seating options as a way to engage students better in class.

Hicks said she based her classroom design on studies that show physically active kids are more engaged. She specifically referenced a 2006 Journal of the American College of Sports Medicine study that showed elementary students who did a 10-minute exercise once a day were more on task afterward.

Hicks said her room design is meant to encourage kids to move around. She doesn’t let them stay in the same place all day, and some of the seating options, like exercise balls and stools that swivel, allow kids to wiggle around as they work.

“Because you are allowed to move your body, it actually calms you down,” she said.

Hicks said she doesn’t assign seats in her classroom. Instead, kids can sit where they want. And giving kids choice is a powerful motivator, she said.

“They can choose to sit wherever they want, as long as they are making good decisions,” she said.

If students are off task or not paying attention, Hicks will then begin to restrict their choices, limiting them to a couple of seating options rather than giving them free run of the classroom.

She does ask her students to make sure they can see the board when she is presenting lessons, but when students are working on assignments they can go where they want and work with their peers. As students help their classmates understand the material better, they also master it better themselves, Hicks said.

Hicks has used about $2,000 from a grant to furnish the classroom with exercise balls and hokki stools, a type of seat that requires people to actively balance while sitting. Some studies of very small groups of students suggest those seating options may improve the behavior of students who are on the autism spectrum or have attention deficit hyperactivity disorder.

In fact, Hicks believes so passionately in the approach that she has kicked in around $300 of her own money this year, scouring yard sales and online listings to find used furniture that adds to the seating options in her room.

“This is our way of life in the classroom,” she said. “I truly believe this is best for kids. That’s why I invest in it.”

“I like it because I go to different places every day,” said Josie Mansfield, an 8-year-old in Hicks’ class.

Sadie Tyler, 7, said she likes being able to find comfortable places to sit.

“It gives us calm bodies,” she said.

Hicks said she has taught other grades in past years, so it’s hard for her to compare how this class is performing to years where she used a more standard physical environment for the classroom. But she said this group of kids is particularly happy in school, and many choose to spend the time between when the doors open in the morning and the start of school in her classroom rather than in other areas of the school.

“This is their second home. They don’t avoid coming to class,” she said.

Hicks said the model is not for all teachers, and the classroom structure was a bit of a risk. Teachers using it have to set behavior standards carefully or the classroom could become chaotic, she added. Still, she promotes the model to her peers.

“Just because way back when we sat in desks and looked forward doesn’t mean it was the best practice,” she said.

And she added that there are a few students in her class she thinks might be struggling more if they were confined to a standard desk all day.

Mary Lynn Roush’s fifth-grade classroom, on the other side of Mountain View Elementary, provided another model that looks a little different from the traditional concept: Here the students work at standing desks, with the option of sitting on stools if they choose.

Many of the students were using the desks’ fidget bars — swiveling bars mounted near the base of the desks that let the kids seesaw their legs back and forth as they work.

The desks are in Roush’s classroom this year as part of a research study by Western Oregon University education professors Alicia Wenzel and Gay Timken, who are hoping to measure whether students using standing desks are more academically engaged than their peers.

Wenzel said the gradual increases in education standards and curriculum requirements over time have created classrooms where students are expected to be more focused and still than they would have been in the past.

The study asks if changing the physical environment of the classroom helps kids meet these demands, which Wenzel said are unlikely to go away.

“We have a saying in my field: ‘When the bum is numb, the brain is numb,’” she said.

Rather than looking at whether the standing desks affect health, the study is limited to academic engagement, behavior, physical activity and academics, areas the researchers said have not been explored before.

Wenzel said she and Timken are hoping to see enough of an impact to merit future studies.

“This is one piece to the greater puzzle of making education fit the needs of greater numbers of students,” said Timken.

The researchers collected some baseline observational data in the fall and brought the desks into Roush’s class in early January, and they will continue collecting data through June. They are also collecting data from Mountain View’s other fifth-grade class, which did not get standing desks, so they have a control group to which they can compare the standing desk class.

Either Timken or Wenzel visits the school at least once a week to collect data; they observe three students at a time and evaluate whether they are on- or off-task, recording results at two-minute intervals. They are also having the teachers collect notes about how the desks are being used three times a day and write journal entries about their perception of the level of their students’ engagement. The students in both classes carry pedometers at school, so the researchers can evaluate whether having standing desks affected their activity level.

Both said it was too soon to say how the desks affected engagement. The researchers likely will spend the summer and possibly the fall analyzing their results before they look at publishing anything.

But Wenzel said during an observation Feb. 1 that she saw only five students who were seated and not using the fidget bar, meaning most of the class was taking advantage of the ability to either stand, use the fidget bar or both, which they would not have been able to do otherwise.

“We’re excited about what we may find,” she said.

For her part, Roush said she thinks her students like having the ability to sit or stand in class, and some kids seem more attentive, but she added it was too soon to draw conclusions.

“It’s hard to say what the impact is; that’s why we need to take data,” she said.

Nevaeh Robertson, an 11-year-old in Roush’s class, said being able to stand or use the fidget bar made focusing easier.

“If we were sitting all the time, without standing desks, we don’t get enough energy out. It really calms us down,” Nevaeh said.

At Liberty Elementary School in Albany, teacher Max Nazarian has his fifth-graders get up and move around the classroom every 30 minutes. The students move between different seating stations: One area has a low table at which they can kneel, another has swivel stools that require them to actively balance as they sit, and one wall has a long counter running along it at which students can stand. There also is a more traditional table and chairs in one area, and another area has pedal desks.

Nazarian, who has been at Liberty for seven years and taught at Oak Grove Elementary for six years before that, has his students move around the room so that they aren’t sitting still for too long.

“Being in a stationary position for too long is not good for either their bodies or their brains,” he said.

Nazarian pointed to a 2015 study from researchers at the University of Iowa that found sedentary office workers who were given a pedaling device for their desks experienced positive health effects and had improved concentration.

He said adults should think about how they feel if they’re asked to sit in a lecture for hours on end. Kids, who have more energy, struggle even more with staying still for long periods of time, he said.

“It’s a no-brainer that it’s not good for them to sit in once space for too long,” he said.

Nazarian said he began to convert his classroom to its present style in November 2015, and he added the pedal desks in the spring of 2016.

He said it was obvious the change in the classroom layout had a huge impact that first year because he could compare his students’ behavior from before and after the change.

“Kids that had major behavior issues in the beginning of the year, after the change there was a lot of improvement in behavior.”

Nazarian said he recommends other teachers embrace the classroom model, but said it’s not for everyone.

“You have to have classroom management skills,” he said.

He added that classrooms full of desks are more crowded, and the alternative seating plan made the room feel less claustrophobic.

Madeline Hoffert-Hay, a 10-year-old in Nazarian’s class, said she thinks she learns better there than in more traditional classrooms.

“I like it because I feel more focused. When you are in one place all day, your brain shuts down,” she said.