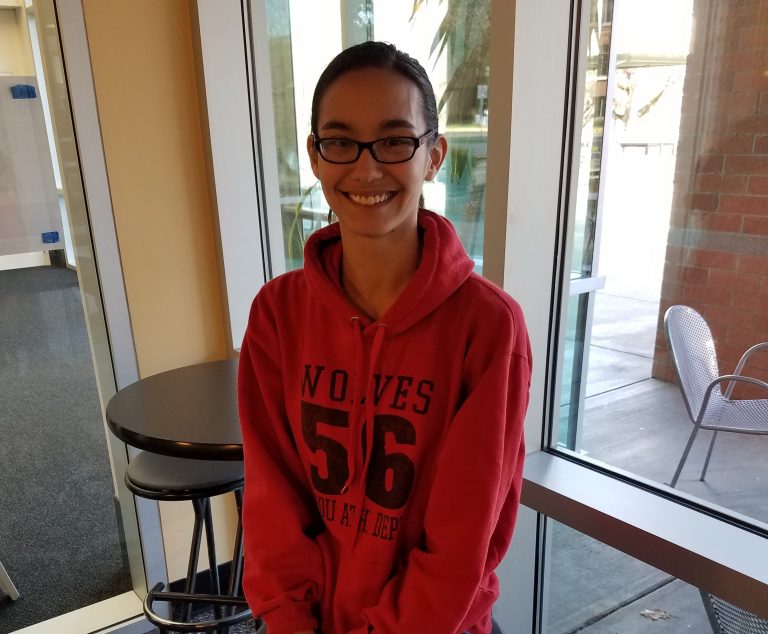 Allison Kingsella ’17 came to Western Oregon University with a plan. The California native had fallen in love with American Sign Language while working on a senior project in high school, and she wanted to train for a career as an interpreter.

However, it didn’t take long for Kingsella to realize that standing at the front of a room, with all eyes on her, was not a role she was going to be comfortable with. She eventually found her path in the Geographic Information Science program, but she still is working toward a minor in ASL.

The change in educational goals did not quell Kingsella’s desire to be involved with members of the deaf and hard of hearing community. So when she saw a post on Facebook about a new program being launched in Cincinnati, she wondered if it might translate well to Oregon. The police in Cincinnati had begun offering a placard for deaf and hard of hearing drivers to use during interactions with officers. The card is modeled after one used in Washington, D.C.; other states have since developed placards with the same purpose but a different design.

“I contacted the police in Cincinnati and asked if we could make the same thing for here,” Kingsella said. “They loved the idea and only requested that we keep the format and the colors the same so that if the placards went nationwide, officers everywhere would be able to recognize them.”

As the project started moving forward, Kingsella sought input from a variety of viewpoints, including instructor Kara Gournaris, who has taught ASL at WOU for many years.

“Allison came to me last spring asking for my opinion to see if her idea was good,” Gournaris said. “I agreed and supported her because she was so respectful by asking me as deaf person first. We had a couple of conversations through the summer as her project was getting to succeed.”

Next, Kingsella reached out the chiefs of the Monmouth, Dallas and Independence police departments. They were on board with the idea as well. The group worked closely to tweak the text of the placards so it was appropriate to the audience.

One side of the card, which is sized to be stored in the driver’s visor, informs approaching police officers that the driver may not be able to follow verbal commands. It just so happens that the cards are in red, white and black, which is about visibility and clarity; the fact that those are WOU colors is just coincidence. The other side features guidelines on how drivers should behave during traffic stops to make the whole encounter go smoothly.

“The wording on that side matches the protocol that police said would prevent problems,” Kingsella explained. “Adjusting the text was not an easy process. We must have had about 11 revisions.”

“I think it’s pretty fantastic,” she said. “Seeing it take hold in our community is exciting. And humbling, really. I dream of having (the cards) available on the whole West Coast.”

Efforts to that end are already in the works. Kingsella has communicated with Chad Ludwig, president of the Oregon Association of the Deaf, a statewide nonprofit agency with headquarters in Salem. He said having a universal communication tool for drivers, or all members of the deaf and hard of hearing community for that matter, is a long-standing goal.

“I knew of placards being used in other states through state commissions of the deaf and hard of hearing,” Ludwig said. “In Oregon, we do not have a commission, but we do have the Oregon Deaf and Hard of Hearing Service advisory committee with a subcommittee on police and public safety. I invited Allison to participate in that committee, as we have been discussing a wallet-size card for deaf and hard of hearing Oregonians since late 2014.”

In the meantime, Kingsella is excited whenever she sees that drivers and their family members are embracing the concept behind the placards. On Dec. 8, when the Dallas Police Department posted on its Facebook page about the new offering, several people commented with support and showed interest in picking up a placard. The post had been shared nearly 70 times.

“There was a mom on there who has been worried about her son getting in trouble when driving if he did not respond to verbal commands,” Kingsella said. “She was relieved something like this is available. That just makes me smile.”