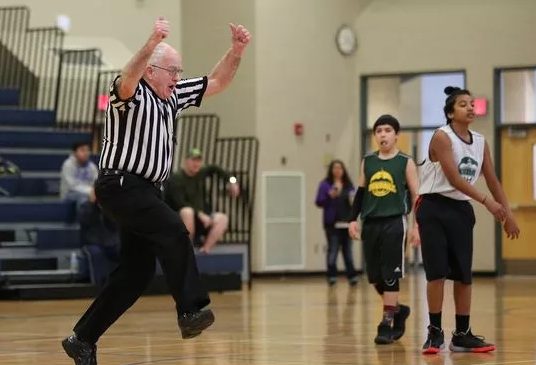 Millard Bates arrives a half-hour before tipoff, setting his duffel bag at the end of the bench. He chats with the coaches, league officials, scorekeepers and his partner, even a couple of fans sitting across the court in the bleachers.

He’s a local celebrity, as far as basketball referees go.

After making the rounds, he sheds his coat and tugs at his whistle. It’s game time.

Moments later, he’s racing down the court to keep up with the players, middle school boys in this case, anticipating the action so he can be in position to make split-second calls.

Bates didn’t warm up or bother stretching because he’s in good shape. For an 86-year-old, he’s in great shape.

“Obviously, I get lots of exercise refereeing,” he says. “When I don’t have a game, I walk every day, sometimes jog, and I’m a little careful about eating.”

Bates has been officiating for 65 years, spanning three generations of basketball players. All three of his sons officiate, too. Steve Bates, his partner for a recent game, says they often are reminded of their father’s legendary reputation.

“Everywhere we go, we hear the stories of my father and his ‘Energizer bunny’ enthusiasm on the court,” Steve Bates says. “We even have grandparents of players now who, when they see him officiating their grandkids, take the time to have their picture taken with dad and their grandchildren. It’s unbelievable the response he gets wherever he goes.”

Millard Bates has decades of experience as an official at the college and high school levels. In the 1980s, at the peak of his career, he was singled out by the Salem Basketball Officials Association as the ref they most respected and the “best whistle around.”

He has worked between 16 and 20 high school state tournaments. He has mentored some of the veterans in the SBOA including commissioner Steve Bulen.

“If it wasn’t for him,” Bulen says, “I would never have gotten into this 42 years ago.”

When Bulen decided he wanted to be a ref, he went to his former Parrish Middle School teacher for guidance.

“One of the things I remember about Millard is he always had his rule book with him, marked up in highlight pen from front to back,” Bulen says. “That was kind of rare — you wouldn’t think so — but he was passionate about the rules.”

Bates now officiates games for Salem-Keizer Youth Basketball, better known as Skyball, and a local church league, which might be considered slumming for someone else with similar court cred.

“I don’t care whether it’s little girls or college men,” he says, “I think everybody deserves a well-officiated game.”

He takes every assignment seriously and is just as exuberant on the court now as he was 30 years ago, although he has lost a step or two with age.

“I’m very intense,” Bates says, “and I’m not always happy with my officiating. There are times when I blow the whistle and I say to myself, ‘Millard, you should flush it down the toilet.’ I know when I screw up big time.”

Millard Everett Bates was not born wearing stripes or with a whistle in his mouth. It just seems that way. He grew up on a 60-acre farm just east of Salem and had five brothers and four sisters. He describes his mom as a tough cookie and his dad as a workaholic.

Bates went to Witzel School, a one-room schoolhouse that was closed in the late 1940s, and graduated from Aumsville High School. He played football, basketball and baseball. His teams made it to the state quarterfinals in football and basketball and won the Class B state championship in baseball in 1948.

He graduated from Willamette University in 1952 and then earned a teaching certificate at what is now Western Oregon University. His first job was in Stayton, teaching eighth-grade math, social studies and science. Much of his 33-year teaching career was split between Parrish and Leslie middle schools.

Bates first became interested in officiating while at Willamette, with encouragement from the late Lestle Sparks and John Lewis, two men who now have sports facilities on campus named after them. Sparks “took a liking” to Bates in P.E. class, and Lewis taught a class in refereeing.

“I liked it,” Bates said, “maybe because of the decision-making.”

Basketball has always been his favorite sport to officiate, although he has also done his share of football, baseball and softball games. He has never kept track of how many games he has worked.

He reminisced about his career before heading off to work a recent Skyball playoff game. Some of his most vivid memories are comical, like the time he was working behind the plate of a baseball game and his pants ripped when he squatted down. He was wearing shorts underneath, but it was still embarrassing.

Another time, when he was assigned to work behind the plate for a baseball game, he forgot his cup and had to call his wife and have her bring it to the field. Players made a circle around him so he could put it on.

He forgot his whistle just once, not realizing it until he reached for it to start the game and it wasn’t there. Recalling this prompts him to reveal he’s wearing one now under his street clothes.

“I thought you might want to take pictures,” he says with a grin.

Speaking of photos, a memorable one was taken of him during a basketball game in 1976 at Sprague High School and published on the front page of The Oregon Statesman. It captured him making a call from his posterior. Fellow officials say he had a reputation of falling, always quite gracefully, and making calls.

When he makes a call, everyone in the gymnasium knows it. He does it with gusto.

“I know I’m too loud,” Bates says, “but some of the referees don’t ever say anything. Some parents want to know what happened.”

He has a thick skin — you have to after 65 years wearing stripes — although there is a limit to the grief he’ll take. When a coach told him he wasn’t refereeing very well and should retire, he told the coach: “You’re not coaching very well, you’d better quit.”

No matter how well he officiates, half of the players and fans are likely to be dissatisfied. That goes with the territory.

After officiating a game during the 2003 Hoopla, the summer 3-on-3 tournament, a losing player charged him from behind, knocked him down and was later charged with fourth-degree assault. Years ago, a lady in high heels hit him with her purse after a game at my alma mater, Sweet Home High School.

Bates’ resume is as colorful as his officiating. In addition to teaching math, English and social studies, he also taught Driver’s Education. When it was eliminated from the Salem-Keizer budget, he started his own driving school. After retiring from teaching, he worked a variety of part-time jobs, most of them as a delivery driver. His cargo included everything from eggs to flowers.

Being idle isn’t in his DNA. He describes himself as a workaholic with a Type-A personality, a lot like his father. His sons, Steve, Mike and Greg, inherited his passion for officiating.

If any of Bates’ 11 grandchildren and 14 great-grandchildren aspire to follow in his footsteps, Bulen wants to be the first to know. He could always use more referees, especially with their pedigree.

Bates is the first to tell you that he has no plans to retire.

“I like to referee, that’s the only answer I can give you,” he says. “As long as I feel good, I’m going to keep doing it. Maybe not as often as I’m doing it now.”

He has been officiating this season as often as five nights and 12-15 games a week.

“I think a lot of us will be surprised if he ever stops before he dies,” Bulen said. “He’s just so passionate about it. If he’s not refereeing, he’s probably sitting in a high school gym watching a game.”

“Forward This” appears Wednesdays and Sundays and highlights the people, places and organizations of the Mid-Willamette Valley. Contact Capi Lynn at clynn@StatesmanJournal.com or 503-399-6710, or follow her the rest of the week on Twitter @CapiLynn and Facebook @CapiLynnSJ.