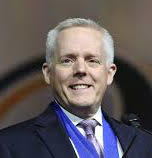 Western Oregon University alumnus Matt Utterback ’89 has won the National Superintendent of the Year Award from the American Association of School Administrators. The award was announced March 2 in New Orleans.

Utterback has been superintendent at North Clackamas School District since 2012, and during that time the district has made major gains in graduation rates and test scores, particularly for low-income, minority and special education students. Utterback earned high marks from the AASA for leading his district to major progress despite budget restrictions, school closures and the lackluster test scores he inherited.

“This award recognizes leadership at the highest level,” said Mark Girod, dean of the College of Education. “Superintendent Utterback was selected for recognition among outstanding superintendents from all over the country. We are proud of Matt and that Western Oregon University played a small part in his development as a quality educator.”

Utterback was selected last fall as the Oregon Superintendent of the Year, which made him eligible for the national honor. Judges with the AASA look at four main categories when choosing each year’s top contenders: leadership in learning, professionalism, communication and community involvement. The organization revealed in December that Utterback was among four finalists. He had to complete a national briefing and series of interviews before being awarded the top honor over candidates from Alaska, North Carolina and Florida.

“Starting with the Oregon award, it was quite an honor to have a staff that’s busy every day but still took the time to nominate me,” Utterback said. “The application process for the national award was pretty involved, but I felt we had to put our best foot forward as a region and as a district. We wanted to say ‘This is who we are and this is what we stand for.’”

While at Western Oregon State College, as it was known at the time, Utterback majored in education and earned a teaching certificate in social studies and integrated science. WOSC was where he started dating his future wife, Nancy, who also is an ’89 alum. She graduated with a bachelor’s degree in education with a language arts certificate and has been a teacher in the North Clackamas district for many years.

Leadership roles always seemed to call to Utterback. He was class president at Newport High School and served as student senate president at WOSC. He was awarded the Delmer Dewey Award for outstanding male student in 1989 and spoke during the graduation ceremony.

“Western was small enough that it offered a more personalized approach to education. That’s what attracted me,” he said. “I would have gotten lost in a larger system. It wasn’t just the education part of it. It was my extra-curriculars and my involvement in leadership that made a big difference. That same personal experience is what we are providing our high school students today.”

Though Utterback left Monmouth nearly 30 years ago, his reputation in the education field is exemplary. News of his national honor came as no surprise to those in the WOU College of Education.

“I don’t know Superintendent Utterback well,” said Girod, “but I know he is well-respected by his peers around the state for his leadership and support of quality teaching and learning.”

The North Clackamas School District comprises 32 schools serving more than 17,000 students. The district garners attention for its innovative practices, which are designed to keep kids engaged in school and to help them reach significant educational gains. Since Utterback took the helm in 2012, graduation rates have risen from 69 percent to 83 percent. Two high schools in the NCSD are in the top three Portland-area schools for ensuring low-income students graduate on time.

“What makes us more unique than other districts has really been the deep commitment to equity we’ve embraced over the last five years,” Utterback explained. “At its core, we ask ‘How do we build an inclusive learning environment for all our students that honors their history and culture to really affirm their identity?’ It’s a district-wide goal based on the equity policy that our board approved. And it’s meant a lot of training on race and its impact on an education system.”

Even Utterback’s national award will improve the life of a student. The AASA will present a one-time $10,000 college scholarship in his name to a student enrolled at Newport High School.

Are you a recent graduate from the North Clackamas School District? Share your memories about your time there below.