It is challenging to chart one’s own path in the world of publishing, but a recent Western Oregon University graduate and a current WOU senior have fearlessly entered the fray to share their creative styles.

Both women majored in English with a concentration in writing, and they describe their years at the university as transformative in terms of their skills and confidence when putting pen to paper. Their styles are extremely divergent – one is a poet and the other writes paranormal fiction – but a love of writing is the common trait that has directed their pursuits. 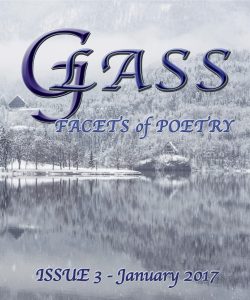 After graduating from WOU, Celia Funk put her English degree to work quickly with a position as editorial assistant to a professor at Oregon State University. There she edits articles, textbooks and chapters about history, the professor’s field of expertise.

But her true literary love is poetry. Together with partner A. A. Radda, Funk last year published the first quarterly edition of Glass: Facets of Poetry. It’s a literary magazine that showcases traditional poetry, a genre Funk believes doesn’t get the attention it deserves.

“I love traditional poetry because it uses common language in an extraordinary way,” she said. “Most big (literary) houses like a more contemporary style, but we don’t include prosaic poetry in Glass. I suspect traditional poetry takes more time to write, and perhaps that’s the reason it’s less popular. But poets are artists who work very hard.”

The duo published the third edition of the magazine in January, and the number of submissions continues to grow. Funk is the editor, selecting the 15 to 20 poems that make the cut for each edition. Most contributors are from the United States, and Funk solicits submissions on online writer websites such as Duotrope and NewPages. Partner Rodda handles the visuals, laying out the literary magazine and choosing background images.

“We are like-minded,” Funk said of Rodda. “We trust each other’s vision and taste.”

Funk traces her love of poetry to her childhood. She was home-schooled, and part of the curriculum was a weekly poetry discussion group led by Funk’s mother, who herself was a British and American literature enthusiast. Funk cites British poet Edmund Spenser as her initial favorite.

“His style is so magical,” Funk said. “I wanted to write in that style.”

When she arrived at WOU as an English major, she was not particularly focused on writing poetry, but her English 218W course with Professor Marjory Lange rekindled the fire. One classroom assignment had her dissecting the work of John Keats, and that intimate look made her love poetry even more.

“Dr. Lange pushed me hard,” she recalled. “It was in that course that I really became a poet. The faculty at WOU was the key feature in moving me forward.”

Professor Gavin Keulks, the director of the Honors Program, was one of Funk’s advisers. He remembers Funk as driven, smart and engaged during her time at WOU.

“Students like Celia testify to the truth that intellectual curiosity and a love of the arts haven’t vanished among American youth,” he said. “It was always a joy to talk to her.”

Other courses provided instruction in tangential aspects of writing and publishing. Funk learned business and technical writing as well as marketing techniques and how to handle rejection and acceptance letters – all the skills she would press into service when Glass became reality.

The poetry magazine has garnered several dozen annual subscribers in less than a year of publishing, and she said she has received supportive feedback from readers. But Funk is prepared to build the page count and readership well into the future.

“Just because I’m passionate about it doesn’t mean it’s not going to be a lot of work,” she said. “But there is great literary merit in traditional poetry that’s relevant to today’s culture.”

Funk advises people who may lack enthusiasm for formal poetry to take a closer look. Launching a deep dive into verse can be a transformative experience.

“Pick a poem and read it slowly and carefully,” she suggested to reluctant poetry readers. “Read it over and over and let yourself dwell on it. Read it fast. Read it slowly. Keep giving it a chance. Think about all the different ways the poet uses words. You might be amazed how much is packed into a small verse.”

The creators of Glass: Facets of Poetry invite the public to a reading in honor of National Poetry Month. The event will be at 2 p.m. April 8 at Imagine Coffee in Corvallis. 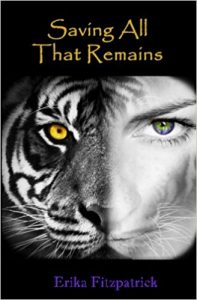 One of the best attributes of writing is that it embraces so many different styles. Erika Fitzpatrick’s writing may be on the opposite end of the spectrum from poetry, but her motivation is the same. Her preferred writing style is closer to fantasy, where real life meets the magical and readers are along for the ride to see what unfolds.

Fitzpatrick, a double major in English and psychology, has been writing novels since at least seventh grade and has self-published several. A quick search of her name in the books department on Amazon.com reveals five titles with publication dates spanning six years. At the top of the list is Saving all that Remains, her latest book that came out last fall and represents the culmination of her honors thesis.

“I actually started the book in high school,” she said. “I worked on it all through college, too, just refining it all along. I had to go back and fix stuff, which was easier because of the skills I’ve learned here. But I had to completely overhaul the first chapter when I decided to make it my honors thesis.”

Saving All That Remains is difficult to label, genre-wise. Fitzpatrick suggests “paranormal” or perhaps “urban fantasy,” but isn’t sure either of those is an exact fit. The novel tells the story of Jade, a woman who is electrocuted and, as a result, turns into a tiger. She ends up in India, where she gets involved in the rivalry between tigers and lions and learns the complications of living as an endangered species.

Fitzpatrick was happy to go the self-publishing route. Although the concept used to carry a stigma, that’s no longer the case, she said. Plus, taking the indy option puts publication within financial reach of more authors, including Fitzpatrick.

“I’ve always enjoyed the freedom of indy publishing,” she said. “I get to choose my own cover and my own font. I might eventually go the traditional route when I feel like I have the resources, but this works great for now.”

She admitted there was a learning curve for understanding how to self-publish, but she found plenty of reliable resources for advice on the WOU campus. She took Digital Production and Publishing Specialist Scott Carter’s class Writing for Publication, which taught her the business aspects of writing and publishing. Her professors and instructors in the writing center “revolutionized” her skills and helped her find the final edits on her manuscript.

“I got some help with plot gaps and grammar,” she said “In my head, it’s all there, but having another set of eyes before it went public was great.”

“Erika is a gifted, hard-working writer who dedicates herself to her characters,” he said. “She’s not intimidated by the long hours. I’ve met dozens of students who say they want to write a novel, and many do. But Erika wants to be a writer, and that’s much harder.”

Now that her honors thesis is complete, Fitzpatrick has one more term before graduation. She plans to get a graduate degree at WOU in the Master of Arts in Teaching program so she can teach writing at a university at some point in the future. In the meantime, she’s exploring other genres, including creative nonfiction and, yes, even poetry. The Writing Center’s Flash Fiction club during spring term helps her hone her writing skills.

“I love creating worlds and characters,” she said. “I wouldn’t mind making the best-sellers list someday.”

Keulks said he admires Funk’s and Fitzpatrick’s ambition and drive to share their work with readers. It’s notable that they’ve found their niche in a difficult industry.

“Publishing is brutal, with acceptance rates for around 1 percent. It’s no different than trying to sell a screenplay in Hollywood,” he said. “These students deserve a lot of the credit for their endeavors on their own.”

Tell us about your creative outlet! Do you dream of writing the great American novel some day?