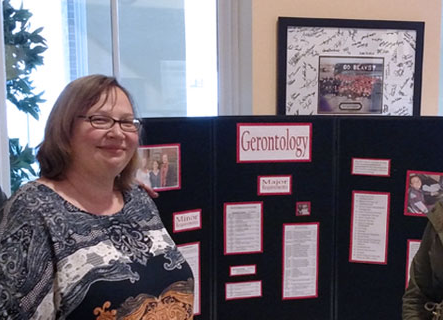 The Gerontology program at Western Oregon University is a fairly recent addition to campus; The first graduates were a handful of post-baccalaureate students in 2012. But the area of study is high on the job-outlook meter, so the program has enjoyed quite a bit of growth during the five years since.

Associate Professor Margaret Manoogian is the head of the department and was responsible for creating the program’s practicum, a tough two-part process that allows students to get real-life experience in the field. She estimates the department has yielded 70 graduates during its run, with 30 to 40 students currently studying the field. Some are majoring in Gerontology and others are minoring.

“Gerontology is different from geriatrics,” she said. “Geriatrics is more the health-based aspect of getting older. Gerontology is a behavioral science. Students are focused on the psychological, biological and social aspects of aging populations.”

The job prospects for Gerontology graduates are strong, as a large part of the U.S. population is reaching its elder years. Manoogian said WOU students go on to careers in adult foster care, counseling, casework, and, after graduate school, occupational therapy or social work.

“Gerontology is an applied major,” Manoogian explained. “Because behavioral science is a part of the liberal arts, gerontology is multidisciplinary and broad in some ways. But the two required practicums really set Western’s program apart as far as being service heavy.”

The students who study gerontology are passionate about helping senior citizens, Manoogian said. They truly appreciate working with older Americans and helping them enjoy life. She cites two students who went above and beyond to show their dedication to gerontology and the organizations who further the area of study.

“Shannon Kison and Joseph Castor both really surprised me,” she said. “They went out of their way to get involved with national gerontological organizations.”

Kison ’17 is a non-traditional student who interned for Manoogian and is active in the Gerontology Student Club. She’s played an instrumental role in the success of the annual Careers in Aging Week (CIAW), including finding funding for the week’s events. Kison applied to become an ambassador with Gerontological Society of America (GSA) and was selected.

The GSA website describes ambassadors as students who “spread awareness of the field of aging, as well as serve as a networking tool linking individuals with an interest in gerontology from all over the country and abroad with The Gerontological Society of America.” Kison was a shoo-in thanks to her work with WOU’s CIAW and other program opportunities.

“I felt that networking while still a student would not just benefit myself but my university community as well,” Kison said of her motivation to apply. “I attended the GSA conference in New Orleans this past November and was able to share the value that the WOU Gerontology program places on CIAW and about the undergrad program that is offered.”

Manoogian said she couldn’t think of a more ideal candidate.

“Older adults are Shannon’s people,” Manoogian said. “She needs to work with them. She’s an incredibly capable person. She’s a connector. This award is great for her and great for her program.”

As an ambassador, Kison has access to cutting-edge practices through the GSA. She already has brought back helpful materials and made a number of networking connections at meetings.

Even without the title, Kison is confident in her ability to find a high-quality job in her field after graduation, thanks to the strenuousness of the WOU Gerontology program.

“With the quality of education as well as the practicum experiences I have had, not only am I confident I will find a job, but (I know) that I can obtain a career that I am passionate about,” she said.

The other student Manoogian highlights, Joseph Castor ’17, was able to travel with her and Assistant Professor Melissa Cannon to Miami, where the annual meeting of the Association for Gerontology in Higher Education was held in mid-March. In order to get money to cover travel, registration, lodging and meals, Castor applied for a James McKenney Student Travel Award, which carries a value of about $1,000 and is granted to 10-12 students each year. Castor had to submit an essay and a C.V., but the effort paid off.

Manoogian said Castor had little travel experience and was pretty nervous about the cross-country flight. But at the conference, Castor thrived. He networked and attended meetings, making the most of his experience and absorbing information from experts in the field of gerontological studies.

“You could just see the wheel turning in his head,” Manoogian said. “He was everywhere, talking to people and making connections.”

Castor aspires to be an occupational therapist, which means grad school likely will be his next step. In the meantime, both he and Kison will be among the students participating in Careers in Aging Week, which is happening until April 11.

The duo will assist other students in discovering the opportunities for employment in gerontology-related fields. The WOU Gerontology program has a lot of success with job placement, Manoogian said, as many students are committed to an employer before they graduate.

“Our students get hired at places such as assisted-living facilities, long-term health care or with nonprofit organizations,” Manoogian said. “Life enrichment coordinator is a common position students take right after school. Some choose hospice care.”

Career options and more information about the Gerontology department will be on display through CIAW. The event culminates in a presentation by former Gov. Barbara Roberts on April 11. Here’s the full schedule for the week: