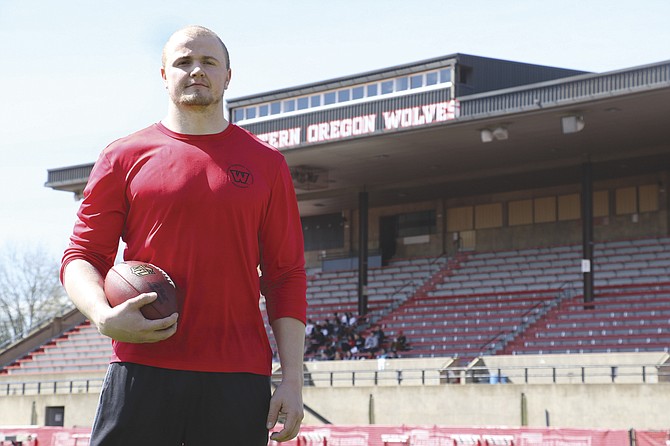 MONMOUTH — There have been few names that have stood as tall in Western Oregon University athletics as Andy Avgi.

On the hardwood, he helped lead the men’s basketball team to the NCAA Division II Final Four during the 2015-16 season.

On the gridiron, he played football for the last two years, and had 16 catches for 198 yards and five touchdowns during his senior year. Upon the end of the 2016 football campaign, Avgi stood at a crossroads — pursue a professional basketball career or football.

“There were thoughts on pursuing basketball, but the opportunity in football is greater,” Avgi said. “I wanted to play at the highest level, and it was going to be in football, and it’s going to be my career.”

Once he decided on football, the training began in earnest for his pro day.

“I would wake up at 6:30 a.m. and drive to Bellevue (Wash.) from Seattle,” Avgi said. “I would have a workout in the morning, then have a snack. I would do a strength workout before lunch and then finish with another workout after lunch.”

Avgi participated in a pro day showcase with Oregon State — and the results were impressive.

“I think it went great,” he said. “I reached a lot of my goals I set for my pro day and overall, I was really happy with how I did. I believe the hard work paid off.”

Since then, Avgi has attracted interest from numerous teams and hopes to get a few team visits prior to the NFL Draft April 27-29, he said.

“The next steps are the draft and that first minicamp,” Avgi said. “This is exciting, and I can’t wait to find out where I am going. That first camp is when I’ll get to show the team that gets me what I can do.”

“I hope people take away that it doesn’t matter where you come from or what school you go to,” he said. “If you have a dream of playing professionally in any sport, go somewhere that you think you can do it.”