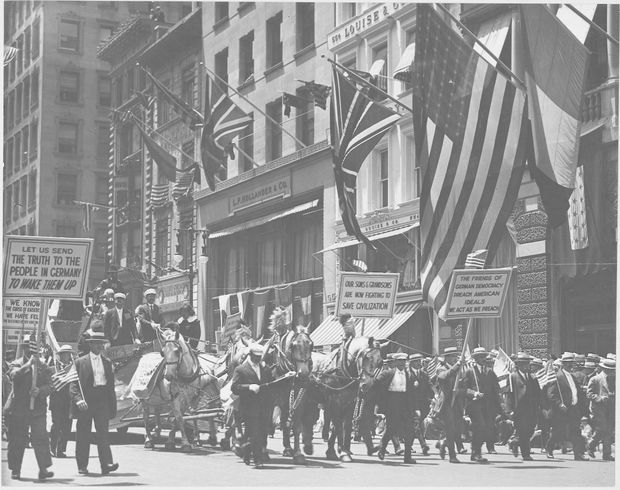 Debates about whether the United States should intervene in wars fought in other countries; African Americans, women and other minority groups demanding equal rights; citizens resenting the federal government’s encroachment into their daily lives; and the government cracking down on those who dare question the rightness of the U.S. approach to national emergencies.

That list of controversies may sound as timely as this morning’s news report. But as the PBS “American Experience” six-hour documentary special, “The Great War” makes disturbingly clear, such deep divides are, in many ways, the same old American story.

“The Great War” is timed to mark the 100th anniversary of America entering World War I, on April 6, 1917. As one of the interview subjects says early on, World War I – which at the time was called “the war to end all wars” – is the most important historical event people don’t know about.

The filmmakers, Steven Ives, Amanda Pollak and Rob Rapley, are working on a vast canvas. Over the three nights “The Great War” airs on PBS, the film covers, among other topics, the horror of World War I trench warfare; the staggering casualties; the romantic idealists who wanted to fight because they thought it noble; the dawn of using celebrities to drum up support for a cause (Charlie Chaplin and others helped sell “Liberty Bonds”); the deadly flu epidemic that added to the suffering during wartime; and the roles played by diverse groups such as Native American “code talkers” in the war effort.

It’s all utterly fascinating and makes the six hours fly by. But where “The Great War” is most compelling is in its highly detailed portrait of what the U.S. was like before World War I – in 1914, the U.S. Army ranked seventeenth in the world, behind Serbia, as the documentary tells us – and how the conflict transformed the U.S. on the homefront and on the global stage.

While war was breaking out in 1914 Europe, with Germany and it allied countries fighting the United Kingdom, France, Russia and other allies, the U.S. was torn.

Resistance against joining the conflict was strong in the U.S., where the huge wave of immigrants who came to America from Europe had little desire to fight to protect countries they had fled.

“The Great War” paints an especially complex picture of President Woodrow Wilson.  After three-and-a-half years of official American neutrality, Wilson finally concluded that the U.S. must enter the war because, as he famously said, “The world must be made safe for democracy.” But this was the same man who, for all his professed progressive ideals, was a staunch segregationist.

By the time World War I ended in 1918, the U.S. had ascended to the status of world power that it has maintained ever since.  Along the way, the role of the federal government grew, as did official intolerance for dissent.

Americans came to feel watched, as one expert notes. Pressure was high to conform to wartime rules. If someone griped about food restrictions, for example, a neighbor might rat you out. Free speech was considered less important than repeating the government line. And German-Americans, even if they had been born here, were regarded with suspicion, and pressured to abandon any traces of German culture.

As the filmmakers and their interview subjects (who include Oregon-based podcaster Dan Carlin and Kimberly Jensen of Western Oregon University) tell it, the fault lines that shake America’s foundations today can be traced back to a global conflict that, rather than bringing peace, launched a new era of world disorder.