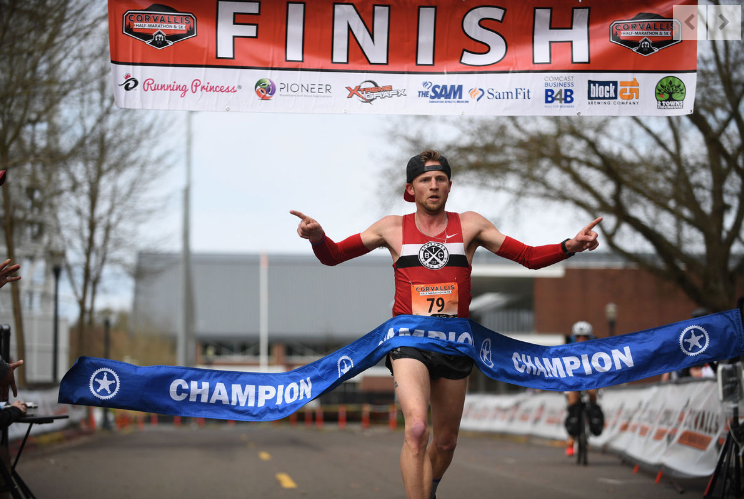 If you milled around the starting line of the Corvallis Half Marathon before the race got underway, you would have seen a microcosm of Corvallis:

People of all ages talking, knots of people in matching group shirts taking photos together, people with signs to support family members and friends, a toddler throwing a tantrum in his grandmother’s arms as his mom got ready to start the race, snatches of conversation not in English and Oregon State University’s pep band playing to give the scene a cheery feel.

Dave Erwin, a Corvallis resident, said community is the big appeal of the road race, which was held for the seventh time Sunday morning and drew more than 1,000 runners.

“It gets us all out together to do something fun,” he said before the race. “Plus, I stay healthy.”

Erwin has run the half marathon six times, only missing it once when he was injured, and even then he rode his bike with some runners he knew.

Erwin said everyone at the event is pumped for the race.

“It’s pretty upbeat,” he said. Although, he adds, most road races are.

Whitney Lanham, an Albany resident doing the Corvallis Half Marathon for the first time, said events like this show the fitness culture present in the Corvallis and Albany area, and in the Pacific Northwest more broadly.

“This run does represent what this region is about,” she said.

She added that the community aspect of the race was a huge part of its appeal: she sees many people she knows or works with through the event.

Rohde said this was her first time running the Corvallis Half, and she saw lots of people out cheering along the course.

“It was cute. It was like they were tailgating,” she said. Rohde added that she liked that many people were holding signs supporting female runners with messages like “Go girls!” She estimates she saw at least two such signs every mile.

Rohde added that the Corvallis Half was a good warm-up event for her, since she plans to compete in the USATF Half Marathon Championship at the end of the month.

Brady Beagley, the top male finisher with a time of 1:07:23, said the course was fun and the community was supportive.

“There were people (cheering) pretty much the whole course which, was very cool,” he said.

Beagley, an assistant coach with Western Oregon University’s track team and a member of the Bowerman Track Club, said he was pleased with his performance, in his first half marathon road race.