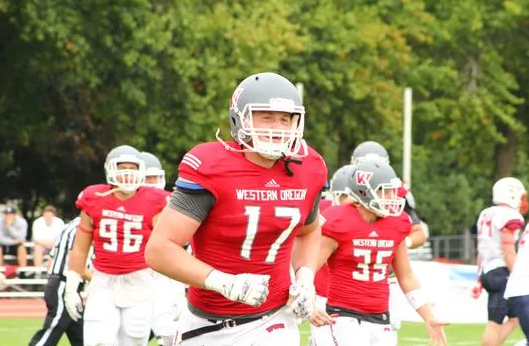 MONMOUTH — There are many unknowns in Andy Avgi’s future, but the former Western Oregon athlete is enjoying every moment of it.

Avgi, from Woodburn, was a standout in both basketball and football for the Wolves, and now he is training ahead of the NFL draft with hopes that a team will call.

Avgi had a strong showing at last month’s pro day at Oregon State, and NFL teams could see him as a raw talent that they could mold.

“I felt really great,” Avgi said about his pro day effort. “There are some things where you always think you can do better. But I’m pretty content with how I did. I think I turned a lot of heads with a lot of scouts.”

During his training, Avgi is mostly working to stay strong and keep his speed ahead of the draft, which is set for April 27-29.

“I’m just focusing on what I can control right now,” Avgi said. “(NFL teams) call me and say they are interested, I’m letting my agent handle all that, so they’re really talking to him.”

Jason Slowey, Western Oregon’s Director of Football Operations and Linebackers coach, knows what Avgi is going through as he experienced the draft process in 2012, when he was selected in the sixth round by San Francisco 49ers with the 199th overall pick.

“It’s really stressful. It is really fun, though. There are a lot of unknowns, which is kind of a scary deal. Just a lot of communication between you and the agent,” said Slowey, who spent time with both the 49ers and Oakland Raiders in the NFL after his playing career at Western Oregon. “It’s a lot of waiting and controlling what you can control, which for him the last thing was pro day, and he did well.”

Even if he is not drafted, Avgi likely could be signed as an undrafted free agent.

“There’s a handful of teams that are definitely really interested in him, it kind of depends on where things fall during the draft,” Slowey said. “You get a feel for, hey, you might get drafted, you might not. But after the draft, you’ll probably get signed. I think that’s where we’re at now, hopefully.

“A lot of these teams, some guys are like, ‘yeah, he can play tight end for us.’ I can see him being a really good left tackle because of his feet and hands from basketball, and some of those guys might want him to play on defense, like defensive end or outside linebacker,” Slowey added. “Just because of his height and weight, and he has a freakishly big arm span, so he could play a lot of different things. It just kind of depends on whoever picks him up.”

Slowey said that going from the college game to the NFL, even in practice, there is a much faster pace.

“It’s going to be fast. He’ll be fortunate if he does get picked up, the first thing he’ll do is a rookie mini camp, so that’s a great situation for him because everyone there is either a rookie or a practice squad player, so it’s a good introduction to what he should expect,” Slowey said. “I’m just really excited for him. If he gets the opportunity, which I feel confident he will. He has so much ability, and just for him to be able to get in with some professional coaching, and really have some guys break it down for him, I think he’ll really take off.”

Tyrell Williams, from Western Oregon and Cascade, went undrafted in 2015, but is having a strong NFL career so far with the Los Angeles Chargers, including 1,059 receiving yards and seven touchdowns last season.

“That’s why I’m not even worried about if I get drafted or if I don’t,” Avgi said about Williams. “I know I’m going to be on a team, and then after that, it’s going to be up to me. It’s a lot of fun.”