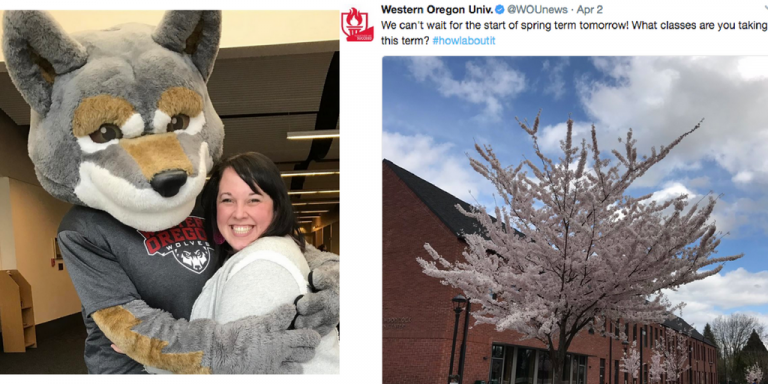 Lisa Catto ’10 has been a fixture on the Western Oregon University campus for 12 years, though her title and office location have changed multiple times. Since the creation of Strategic Communications and Marketing in September, Catto has been the manager of media relations and social media, a title she describes as the most accurate reflection of her myriad duties.

Catto (pronounced “CAT-oh”) joined the WOU staff in 2005 after having earned a bachelor’s degree in journalism at the University of Oregon and working for a few years in public relations and on political campaigns. The Gresham native started out as a public relations specialist at WOU at a time when social media was still in its nascent stages, with only one platform available.

“MySpace was around, but it wasn’t really being used by professional organizations,” she recalled. “No one was thinking about how it would be used for business purposes.”

The public relations office at that time included the director, a graphic designer, a web designer, Catto, a sports information director and some student workers. Philip Conn occupied in the president’s office.

Later in 2005-06, everything changed. John Minahan came in as president. Catto’s supervisor retired. The members of the public relations department began to scatter, with a core group eventually being pulled into university advancement in 2008. Catto recognized an opportunity.

“I’d been trying to get into social media, but no one was really convinced,” she said. “When the department change happened, I said, ‘OK, I’m doing this.’”

Even then, social media work accounted for just a fraction of her day-to-day duties. But she kept at it, learning best practices and figuring out what resonated with followers. The university’s collection of official Facebook pages expanded, and Twitter, Snapchat and Instagram were added. Catto also added a student team to the collection of communications resources.

“In 2011 I went to my first Higher Education Web Professionals Association conference,” she recalled. “While I was there I heard about student social media teams. It blew my mind. It filled a gap I was struggling to fill in the sense of wanting to use students to communicate with other students. Students lend that authentic voice.”

In the meantime, Catto’s office situation evolved again. In 2014, the president, now Mark Weiss, restructured the public relations functions in a manner that moved Catto under the legal counsel office. But while the view from her office continued to change, her desire to tap into the full potential of social media as an engagement tool remained constant. Her favorite aspect of social media is its inherent flexibility.

“You have the ability to be fun and creative. You can control it,” she said. “You are not asking someone else to share your message for you. You can share your own message. I like that control on behalf of an organization. You still have to get people to see it, but you can control it more, which is nice.”

Finally, Catto is able to focus more on her first love: social media engagement. She’s thrilled to be honing her strategies around its use, but she admits it’s an ongoing process.

“You definitely need some training. You need to be going out there and finding best practices — where people have succeeded and where people have failed,” she said. “There are people who say you need to hire someone young, fresh out of college to manage social media because they are digital natives. But that completely ignores the strategy of it. It takes strategy to do social media communication well.”

“We have several social media team members, plus a student manager and two photographers,” Catto said. “We want to hire a two-person street team to do market research and live engagement, and to expand both the photography team and social media team.”

Student workers create content for Facebook, Instagram, Snapchat, and Twitter in addition to writing posts for the student blog about life on campus and WOU programs. Photographers shoot live events so that engaging visuals can augment WOU Stories or the student Newsflash blog.

“Having students in the Strategic Communications office is great,” said McDonough. “We bounce ideas off them, ask them about what they are hearing and use them as our test audience for printed outreach materials. Plus, they get practical experience with writing and working as a team.”

Emily Carlston ‘18 has been on the Newsflash staff for about a year. She’s written dozens of articles and conducted countless interviews. She touts the value of following WOU’s social media accounts.

“It helps you connect to campus really well,” she said. “You get to find out about things you might not know about because you are rushing to class and can’t read all the posters. It allows you to connect to the community and the campus even when you are really busy.”

Carlston believes students who have not followed WOU social media feeds might not know they exist, or they may have subscribed only to their departmental pages. She reminds everyone that signing up for social media does not mean they have to post things.

“You never have to post. You can just be a watchful eye,” she advised.

Students involved in Newsflash are happy to learn skills that will help them when they enter the workforce. Carlston touts the importance of “soft skills,” such as collaborative communication.

“It definitely helps you with writing skills, but more importantly, it helps you with your people skills,” she said. “You have to do interviews. You have to think on your feet, and you have to do critical thinking. Interviewing is a lot of give and take, even if you don’t really click with that person. There’s a certain level of respect you need to show when you communicate with members of the administration or students who are higher up in the clubs.”

In addition to the Newsflash team, Catto oversees the Social Media Users Group (SMUG), which comprises the managers of all the official WOU departmental accounts.

“Anyone who manages a social media account for any WOU-affiliated group is in SMUG,” she said. “If the WOU name is on it, you are in the group.” Admissions, Hamersly Library, Army ROTC, the Physical Plant, Graduate Programs and others administrate Facebook pages. WOU’s athletic teams rule the Twitter-verse.

WOU’s flagship social media accounts aren’t just for funny memes and student profiles, though they feature plenty of both. Catto said they serve a greater purpose.

“If we have inclement weather or classes are canceled, it’s going to be on social media first,” she said. “During an emergency, like a fire or bomb threat, social media is the fastest way to spread the word. Everyone on campus should follow our flagship accounts. Facebook is the most popular, but there are a bunch of different ones, depending which platforms you like to use.”

Students, faculty and staff can find a link to WOU Alerts in their portal. The service notifies the campus community of emergencies and closures. The form accepts about 10 different contact methods, but it’s best if people enter just two or three. Otherwise, Catto explained, the system can get bogged down.

For those looking to reach out with a story idea for the Newsflash team, there’s a work request form on the Strategic Communications and Marketing webpage or you can reach Catto at cattol@wou.edu.

In the meantime, Catto is working on her wish list for future communications resources. Her wackiest request is a photo booth with a backdrop and props that could be incorporated into campus events. Her coolest desire? A drone.

“It would be so awesome to be able to film Commencement from the air, right?” she said. “Imagine the views of campus we could take if we had one!”