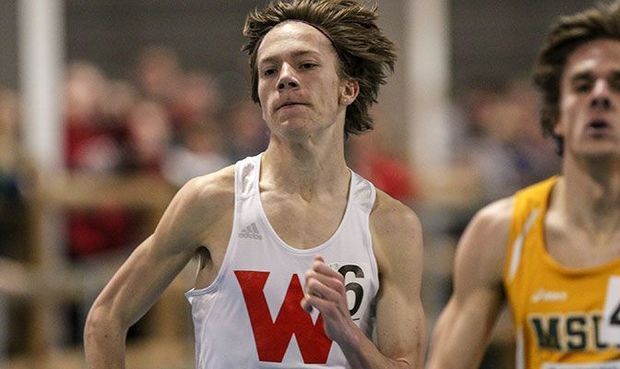 Thumbs up for Western Oregon junior David Ribich, who ran last weekend’s fastest 1,500-meter time by any college runner regardless of classification.

Ribich clocked a time of 3 minutes, 41.45 seconds while winning at the Oregon State High Performance Meet on Friday.

It’s a WOU and Great Northwest Athletic Conference record, and would tie him for 12th on the NCAA Division I level.

At this year’s NCAA Indoor Championships, Ribich anchored the WOU distance medley to victory. Ribich dove over the finish line as the Wolves edged Adams State in the race by by .001.

Texas A&M remains No. 1, the Oregon Ducks No. 2 in the USTFCCCA women’s rankings this week.

Track & Field has this look at records already broken in 2017. Take a bow, Raevyn Rogers.

Another split decision for UCLA and USC.

Tennessee sprinter Christian Coleman runs a faster 40 time than anyone ever at the NFL combine.

UTEP’s Emmanuel Korir and LSU’s Aleia Hobbs are the USTFCCCA’s Division I athletes of the week.

The Nike Oregon Project’s Sifan Hassan is part of the 5,000 field for this weekend’s Payton Jordan Invitational.

Paul Snyder of Citius Mag has some first-hand experience with the Italian race track where Nike will stage the attempt to break two hours in the marathon.

Paula Radcliffe and Jonathan Edwards react with incredulity and dismay at the proposal, which would expunge their records.

Radcliffe rips the plan as “cowardly.”

Edwards says he expected to lose his record in the arena, not at the hands of administrators.

Athletics Australia turns its back on the proposed plan.

European Athletics taskforce chair is on the defensive in the face of criticism from retired athletes.

The Diamond League rolls out a new format.

Martin Bingisser offers 10 reasons to watch the hammer in 2017.

The French election becomes a factor in the choice for the 2024 Olympics.

Alan Abrahamson in 3 Wire Sports: There is a real problem at the heart of the Paris Olympic bid.

The FloTrack crazies are all over this weekend’s Payton Jordan Invitational on this week’s Run Junkie. In what probably is a related development, you can watch the Payton Jordan on Flotrack’s subscription service.

Western Oregon’s Aaron Whitaker sets the school record in the 400.

The front page for LetsRun.com.