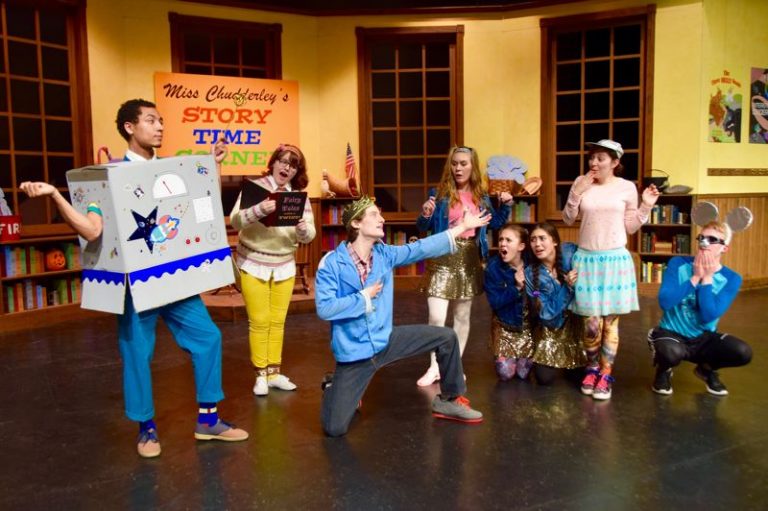 Karlyn Love likes her fairy tales a little bit offbeat, and that is why she chose to adapt and modernize five iconic stories, turning them into “Miss Chudderley’s Fairy Tales With a Twist!” the spring offering from her play production class.

Love came up with the idea for the production, selected the five fairy tales, wrote the school scenes and directed the show, while taking on the role of Miss Chudderley.

“She is a 50-ish lady who is the school librarian at the grade school. The kids get to act out the story, using props and costumes,” Love said.

The five fairy tales are: “Goldilocks,” “Little Red Riding Hood,” “Three Billy Goats Gruff,” “Cinderella” and “The Three Little Pigs.” Each is retold with a modern, funny and surprising alteration.

For example, “Cinderella” is “set in space, and she’s a mechanic who fixes the prince’s spaceship. She leaves her socket wrench at the gravity-free ball,” Love said.

Every year, her play production class produces a children’s show. This year’s play is suitable for ages 3 on up.

“It’s a fast-paced, fully mounted stage production and not even an hour long,” Love said, noting her students play numerous roles in the show.

“Everyone is a lot of different things, and they’re totally committed to their roles, whether they’re playing the prince or a blade of grass,” she said.

This play is personal to Love because she still remembers the librarian who encouraged her to read aloud when she was in the fourth grade. Later, when Love was at Western Oregon University, she was introduced to children’s theater-style of acting and was in a troupe that toured elementary schools.

“Children are the best audience; they are so adoring. I wanted to put that experience with children’s theater into my classes,” she said.

She encouraged her students to be “presentational, where you direct things out to the audience, instead of to your fellow actors on stage. That was new to this group; it’s been a challenge to the actors.”

Jaden Lewis, 16, said he plays the prince in the “Cinderella” story, as well as a book, a ladder, a tree, a door, grass and a variety of vehicles.

“We play the environment and that sparks creativity,” in the children in the audience, he said.

As the prince, “the best part is I get to act really royal. But I also get to drive a spaceship around. As a kid, I watched Disney movies and always wanted to be awesome and cool,” he said.

Maddy Moyes, 17, plays Grace and the “Cinderella” narrator, plus a bowl of pudding, a bed, a tree, a bunny and a bluebell.

People should bring their children and see the show, she said, because “it’s a good way to show how old things can be made modern. It’s fun and exciting for the kids.”

“It’s a happy play,” Lewis said. “The kids [in the play] are a big community. This pushes that feeling to be nice to each other and it pushes imagination in the kids.”

Details: The play is recommended for children age 3 and up, but also contains humor that adults will enjoy.