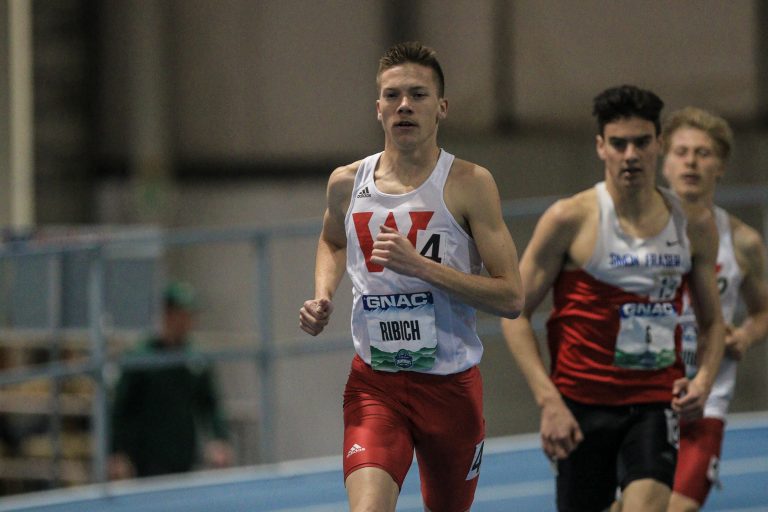 David Ribich ’18, the WOU track standout, is what Director of Athletic Compliance Randi Lydum calls “the poster child of a student-athlete.” The junior from Enterprise, Ore. works hard, maintains solid grades and continues to make a huge mark in the track world on behalf of the Wolves.

“You couldn’t ask for a better guy,” she said. “I never have to worry about him. He does exactly what he’s supposed to do.”

In just three years at WOU, Ribich has come a long way on the track, breaking WOU and GNAC records and winning national championships. But if you ask him whether he’s happy with how things are going, he’ll expound on the thing he needs to work on next. WOU track coach Mike Johnson said his drive to improve is acute, but it’s not his only defining trait.

“David is quite focused in his training and studies, but he works and thinks at different levels of thought and intensity,” Johnson said. “He is a critical thinker and can quickly analyze race and training situations. Yet he controls his running; his running does not control him.”

Ribich is a small-town kid who also ran cross-country and played basketball while attending high school in eastern Oregon. He’d never run indoor track before coming to WOU, partly because his prep coach advised him to just enjoy his last chance to play basketball in the winter, but also because there simply weren’t any facilities nearby.

The new format was challenging; indoor tracks are smaller and sometimes banked, which can throw an athlete off his patterns. Distance runners, though, are less susceptible to the nuance of extra turns. Plus, times are adjusted to address the tighter quarters.

By the time outdoor season came around his freshman year, he was eager to see how he would do in the 1500 meter, the event just short of a mile race. Turns out, he did pretty well.

“I ran 3:57 or 3:56 (in the first outdoor meet), which was a 13-14-second PR, and I was like, ‘Sweet!’ So from there, every race was pretty consistent, all of them were under 4 (minutes),” he recalled. “I won the conference meet freshman year. I was like a couple tenths of a second out from making nationals my freshman year for the 1500. But when I look back, I don’t think I was mature enough to handle the pressures of (running at nationals). So I think the best possible outcome for freshman year happened.”

That down-to-earth, big picture attitude hasn’t budged since then, despite the impressive times he continued to post at both indoor and outdoor track meets during his sophomore and junior years. He wants to break the 4 minute-mile barrier — considered the gold standard for top-level middle distance runners – and has his sight set on the Division II national track and field outdoor championships.

Though he still has a year to go before graduation, the Communications major and Sports Leadership minor is looking toward the future. He plans to use his degree eventually, but a little time spent as a professional athlete first certainly is on the table.

“I just want to get a quicker step in the 1500 and try to lower my time, then I want to try to qualify for (USA Track & Field), which is the more elite professional runners that qualify for worlds and represent Team USA (in the Olympics),” he said. “It’s just kind of my goal to try to qualify for USATF while I’m still in college. I’m looking for a post-collegiate (track) career.”

As of last weekend, his chances for an USATF tryout are looking pretty good. He’s ranked 24th in the nation out of all divisions and professional runners.

“The USATF national meet takes the top 30 in each event to compete at the championships,” he explained. “If I am drawn as a top-30 selection, I will surely be racing in Sacramento in the summer!”

Ribich credits Coach Johnson with helping him to stay focused on the present, even when he’s surrounded by idols when he lines up at the start of a race. Ribich tries to remember that the most important person to look up to is himself.

“I read somewhere — some actor – who said his hero is himself in 30 years,” he said. “If he is meeting his goals and meeting his expectations, in 30 years he hopes to say ‘My hero 30 years ago was me today.’ I think that is pretty cool. Because in reality, my hero when I was in high school is the person I am today, doing what I am doing, so I am on the right track.”

Johnson echoes Ribich’s assessment of his own drive, touting Ribich’s ability to be focused and yet relaxed despite the pressures of being an elite runner and role model for his teammates.

“He is very matter of fact in these areas,” Johnson said. “He loves to play and enjoy the moment. He lives with a purpose. He is not limited by regularly expected assumptions and others expectations.”

The GNAC Track and Field Outdoor Championships are this weekend at WOU. Ribich will race in the 800 meter event and the 1500 meters.

“The incredible commitment by both Coach Johnson and the guys I work out with have been critical in the successes so far this season,” Ribich said. “I’m going into (the GNAC championships and nationals) with full enjoyment, and I’m excited to get the thrill of racing. Out of all the years I have competed in track and field, this has been my most memorable and most fun.”

Come watch David and his teammates compete against the rest of the GNAC schools on Friday and Saturday at McArthur Stadium.