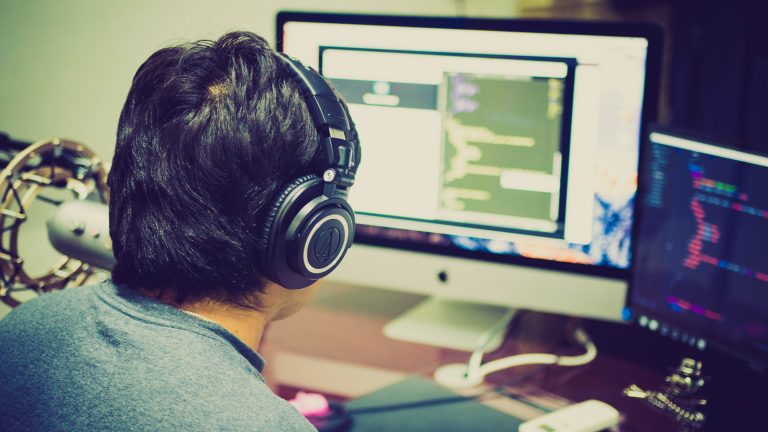 The term “open source software” may not be part of the everyday vernacular, but it plays a significant role in our lives, driving the online engines of the digital world. And it just so happens that some Western Oregon University computer science students are getting a substantial head start in the open source world, thanks to Associate Professor Becka Morgan’s leadership.

Morgan recently was recognized by collaborative software innovation firm Red Hat for excellence in incorporating open source software “philosophy, methods and tools into their academic work.” Morgan and her mentor, Carlos Jensen, at OSU, were the only faculty members on the list of 21 honorees who teach at universities west of the Mississippi.

So, what is open source? Morgan leaps at the opportunity to explain it.

“It makes me deliriously happy to talk about open source,” she said. “Open source software is simply software that you can download and modify the source code any way you want to.”

Open source software is the driving force behind everything from browsers such as Mozilla – a project several WOU students are currently working on – to logistics apps used in humanitarian aid efforts. One of Morgan’s 400-level courses for computer science majors takes a deep dive into open source communities, offering an experience that is fairly unique on a college campus.

“We are one of very few schools who have a course dedicated to open source,” Morgan explained. “Other universities might have it as part of a class, but it’s not the whole focus. (This class) takes my students and introduces them to open source and introduces them to a community. At this point this term, most of my class has already submitted a bug patch, which is really high-level stuff.”

Morgan herself discovered the open source world during graduate school. She was earning a doctorate at Oregon State University when Jensen, then her research mentor, introduced her to the community. Morgan noted the severe underrepresentation of women and people of color in open source and decided to write her doctoral thesis on the topic. As part of her research, she created a class to encourage a more diverse range of students getting involved in open source.

Since she fell in love with open source, Morgan has been involved in a Red Hat-sponsored group called POSSE, the Professor’s Open Source Software Experience. Red Hat describes POSSE as a “cultural immersion in the tools and practices of open source communities.” Morgan has participated in POSSE workshops, conferences and panels during which attendees learn how to teach open source – particularly humanitarian free and open source software (HFOSS) — to newbies.

The humanitarian nature of many open source projects is just one of the selling points of collaborative software in Morgan’s mind. She also enjoys the positivity of the communities she and her students work with. Although “flamers” are a problem on some coding projects, Morgan said she stays away from those groups.

“Open source is mostly people who want to help other people,” she said. “They are saying ‘I’m a good human, and I want to give back to society.’ The people I have met in the open source community have been extremely kind, extremely welcoming. There is bad stuff in open source like there is bad stuff in every segment of society, but I see so much good in the fact that so much of this is volunteer work.”

Humanitarian and diversity motivations aside, there is a clearly practical reason Morgan’s open source class is so popular among computer science majors.

“(Having open source experience is a) great way to get a job,” she said. “It goes on your resume. Students who participate in open source are exposed to large code bases that they didn’t write and then are expected to go patch a piece of. They are exposed to working with people with varying skill levels in environments were people aren’t co-located. All of those things together makes for a unique work experience that companies want.”

Much like college graduates pack their resumes with senior project work samples such as writing, presentations or analyses, computer science graduates can demonstrate specific coding that’s part of major software systems such as Mozilla.

“I’m preparing my students for the real world,” Morgan said. “They have code they can show someone who’s going to hire them, and they can point to it and say ‘This is my code right here. I got to work with Mozilla, and I learned how to find bugs in the source code. I submitted the patches. They were accepted. I worked with mentors in the program.’ It becomes a story around this experience, which is a piece that’s really unusual.”

Aaron Earl, a junior in Morgan’s open source elective course, believes all computer science majors should be required to take the class. Since he added open source work experience to his resume and LinkedIn profile, the South Salem High School graduate has gotten a lot of interest from major recruiters, inviting him to get in touch when he is closer to graduation.

“It’s just been really interesting. I decided to take a senior elective, and now I’m already get this much response from it. It’s pretty amazing,” he said.

Morgan said another student got a job working with the state specifically – the interviewer explained – because of her experience with open source.

In the class, Earl also learned to work with version control tools, which help a software team manage changes to source code over time. That experience has made some of his friends, who already are employed with big companies such as Intel and Garmin, envious because they had to learn it on the job, which was a lot more difficult, Earl said.

Like Morgan, Earl sees the value in other skills he’s learning in the class that have nothing to do with coding. The team projects students collaborate on teach “soft skills” such as cooperation, prioritization and team dynamics in general. Those are important traits that hiring managers look for during job interviews.

“Big companies used to give eight-hour interviews, including with engineers and a white board full of logic problems that candidates would have to figure out,” Morgan said. “But now, they recognize people need soft skills. Can you talk? Can you work with a team? Do you fit our culture? Can you work with the team here?”

Morgan admitted there is no way she can teach her students everything they will need to know, particularly considering technology changes so quickly. Instead, she and her department take a different approach.

“In computer science we teach students how to learn because there’s no way, when they get out into the world, that we can teach them everything they need to know in the industry,” she said. “Software companies know they need employees who have logic, but also if they fit into the company.”

Have you tried your hand at open source coding? Has knowing coding languages helped you get a job? Tell us about your experience!