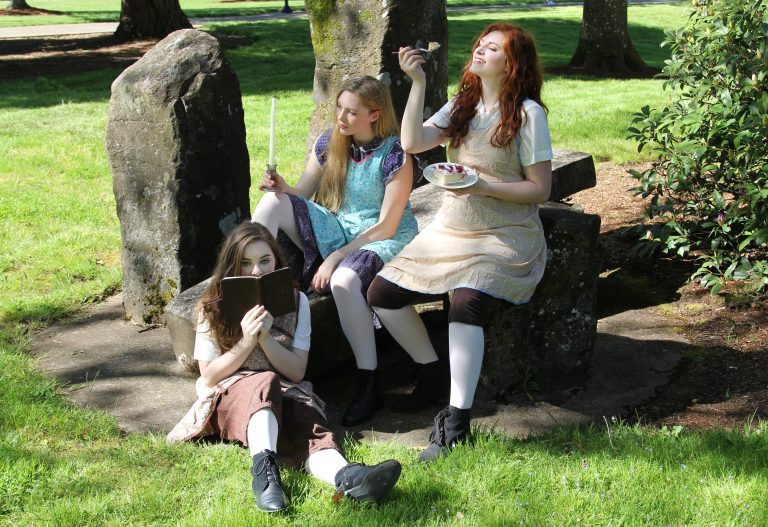 The Western Oregon University Theatre’s final production of the academic year will be This Girl Laughs, This Girl Cries, This Girl Does Nothing, and although the play by Finegan Kruckemeyer is often described as being “fairy tale-like,” guest director Jen Rowe is quick to indicate her preference for “fable.”

“I try not to go down the “fairy tale” road too much because “fairy tale” can feel too Disney-fied,” she explained. “I try to stay with fable land. Fable land allows us to explore things that actually happen to people, with real responses, exploring the full human spectrum of emotionality and experience in real time and making choices bases on those situations and circumstances.”

Rowe, who has worked with Portland Center Stage and the Portland Playhouse in addition to acting in several television series, is free to make any distinction she likes, considering the play is nearly devoid of the usual staging instructions.

“If you look at this,” she said, leafing through the script, “you see it’s just dialogue. There is no set. There is no stage direction. There can be 100 cast members or four cast members. The presentation is minimal. The spectacle lies within the people telling the story, not the production of the story.”

Rowe’s interpretation of the play, which first was performed in 2011, features 18 cast members, most of whom serve as narrators and fill multiple roles. The three main characters, Albienne, Beatrix and Carmen, are the only defined cast members. Rowe suspects the fact that the protagonists are women might explain why the modern play has been presented fewer than a dozen times, but she doesn’t want to pigeonhole the play as being just for women.

“It’s a human story,” she said. “We just get to normalize the fact that three women are the heroines of it. It’s a big conversation that’s happening right now in our nation: Who is telling whose stories? It’s happening politically, it’s happening economically. It’s happening socially.”

The overall message, Rowe insisted, is about overcoming obstacles in a way that make sense for each individual.

“(The three leads) are resilient enough to conquer the world in their own very specific and very different ways that are incredibly empowering and kind of shocking to believe, which is why we are in fable land,” she said.

In the story, the girls’ father, who is a widower, leaves them alone to fend for themselves in the woods when they are 6 years old. The circumstances of the abandonment may seem cruel on the viewers, but Rowe feels there is room for nuance in the decision.

“The fact that he sends his children out in the world at such a young age is why it seems so difficult,” she said. “This is a coming of age story, and that means people have to be let go. His words as he leaves them are true and real, and he says to them that it’s brave to have such trust in the resilience of his children.”

As they grow, the girls each decide to go a different route. Albienne (played by Lindsay Spear) draws people to her due to her spirit. Her adventures include a foray into war before she settles in to become a baker, teaching people to feed and nourish themselves, Rowe said.

Beatrix (Chynna Shurts) is a child of the sun who goes on a search to reclaim her light. She brings illumination and music to others but doesn’t satisfy her own quest for light until she reconnects with her father and brings him home.

Carmen (Natalie Doerfler) is content to remain in the forest, taking care of people and animals but neglecting her own care. After a liberating move, she is able to find love and establish her own family.

“They all have their adventures and they don’t settle,” Rowe said. “They make their own choices and do their own learning. It’s a lovely liftoff.”

The three students who play the sisters are perfectly suited to their roles, Rowe said. She can’t imagine any of them as any other character because each is so attuned with the qualities and struggles of the characters they are portraying.

“It feels like alchemy in terms of the three ladies we have playing these three characters,” she said.

Rowe said she was thrilled to get to work with such a talented group of students. When she held auditions, 36 students tried out. She called all of them back for a second look. In the end, she expanded her original intention of 10-12 cast members so she could include more talent.

“In plays like this, you want to go for efficiency as much as possible because it is so open, and so collaborative. But I sacrificed a little of that efficiency in order to have more people in the room because I enjoyed the amount of talent I was given,” she said.

As a professional actor and director based in Portland, Rowe is used to working with paid actors who often are coming from out of state and who don’t get the opportunity to get to know each other well. That transitory feel can be a challenge in many situations. That’s why she found it refreshing to be on a university campus for the first time since leaving college herself.

After months of rehearsals and fine-tuning Kruckemeyer’s modern-day fable, Rowe is excited to see the production take the stage. The cast is ready to make the performance its own, she said.

“One of my favorite parts as a director is to turn the show over into the hands of the actors and allow it to live and breathe with them, just as the father in the play does for his daughters,” she said.