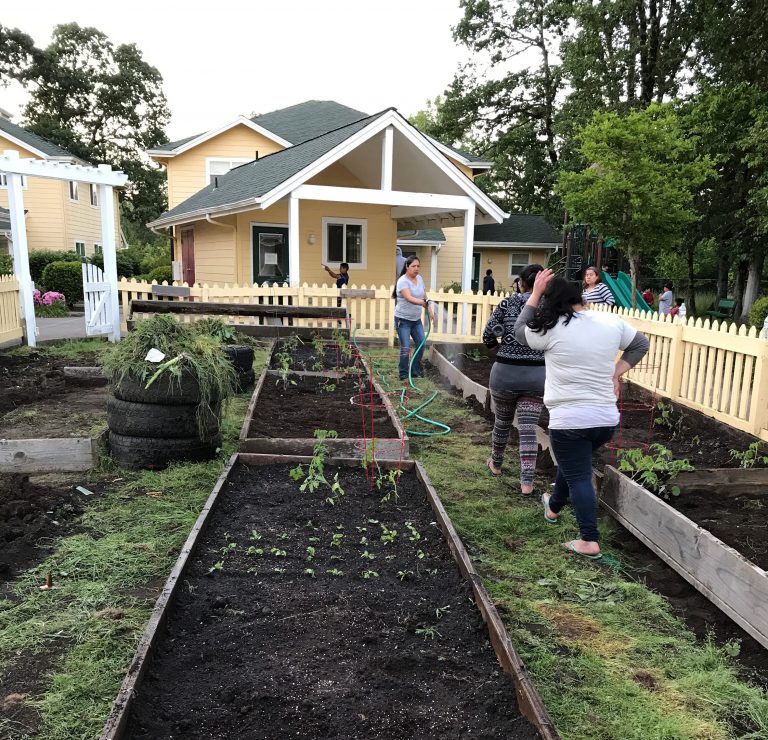 At first glance, it might not seem as though Erubiel Valladares ’05 is working in the industry he went to college to study. While at Western Oregon University, Valladares majored in The Arts with a focus on theatre, music and dance. Today he is community liaison for the City of Independence, working toward better engagement and cooperation between the local Latino community and the city.

“I’m actually using a lot of the skills I learned at WOU,” he said. “School gave me confidence. I learned to speak in front of people. I have to do that all the time now.”

Valladares’ most recent project for the city and its Latino population was to facilitate the Seed to Supper program – which originated through the OSU Extension Service and Oregon Food Bank – in a Spanish-language format. He had about 17 students in the class who learned how to grow their own fruits and vegetables using a solid foundation of horticulture basics, including soil amendments, appropriate watering and organic growing practices.

The students were enthusiastic about learning, Valladares said, especially after he earned their trust by communicating in their language and explaining the benefits of the program, such as having fresh tomatoes and chiles ripe for the picking.

“From my point of view, there is always a lot of interest (in city programs),” he said. “But we have to overcome a lack of trust and a lack of access to resources. The relationships we can build shows them how we can grow food more efficiently and then they can teach others in the same language and culture with better trust.” 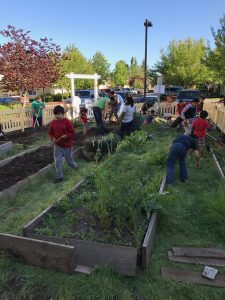 Maintaining ties his Mexican culture has always been important to Valladares, who came to the United States in 1997 at the age of 17 from Queretaro in north-central Mexico. He enrolled in Woodburn High School as a junior and soon enlisted in the National Guard despite having extremely limited English-speaking ability. By the time basic training was over and he returned to high school for his senior year, his English was significantly improved.

“My teachers were like, ‘What happened to you?’” he recalled with a laugh. “But the military was great because it was where I learned about this new world I was living in.”

He’d met Multicultural Student Services and Programs Director Anna Hernandez-Hunter during one of her visits to the campus, and she encouraged Valladares to apply for WOU’s David S. Brody Memorial Scholarship and a Diversity Scholarship. According to Valladares, “encouraged” doesn’t fully cover her insistence.

“She said, ‘You have to do it!’” he said. “She made sure I filled out the form. It’s a good thing, though, because eventually I got the scholarship, and it’s a full ride, you know. I was really excited that my family didn’t have to carry some of the weight for me to go to school.”

Valladares considered a variety of majors, including math, but he landed on The Arts. “I fell in love with the theatre. I wanted to act and do different plays.”

After college graduation, which was delayed for nearly two years because he was called into duty for the National Guard, he focused on finding a position that melded his Mexican culture with his artistic training. He found it at Latinos Unidos Siempre, an organization in Salem that supports and empowers Latino youths.

“I decided to give myself some experience in the organizing world, organizing youths,” he said. “I was able to use my arts. We did plays, crafts, painting.”

After about a year, he needed full-time work, so he joined Pineros y Campesinos Unidos del Noroeste (PCUN or Northwest Treeplanters and Farmworkers United). He served as project manager in the effort to create a community radio station in Woodburn, then stayed on as engineer and equipment guru.

“Technology has always been my love and hate situation,” he said with a grin. “I like taking things apart and putting back together. That was the fun piece, that I was able to play with the other technology area that I had a passion for. I taught people how to use the radio, how to talk on the radio, how to be more eloquent.”

In the back yard of the radio station building, he and local volunteers built a community garden where children could learn that tomatoes come not from the grocery store, but from a plant in the ground.

“I was so shocked when I heard a kid say tomatoes come from Wal-Mart,” he said.

Valladares went on to lead the project to create the Capaces Leadership Institute, which aims to get Latino residents involved in local government and community service positions. The office building for CPI was an eco-friendly passive house, and Valladares wasn’t afraid to get involved in its construction.

“I looked at the plans, and I figured I knew how to read them from building sets for the theater,” he said. He worked with the architect and city planner while also getting 1,700 volunteers involved in the two-year project. “We had work parties on weekends. I loved it because we were combining the green movement with the social justice movement.”

After the CPI project was complete, Valladares was looking for a fresh start. He began by changing his name from Adrian to Erubiel, a decision he made for two reasons. First, someone else had been using his name – he’d gotten a tax bill for $12,000 when he was a college student. Second, he wanted to honor a younger sibling who had passed away by taking his given name.

“Then I started thinking, what would Erubiel want to do with his life?” he said. “I’d spent so much time helping others, I really wondered what I wanted to do for me.”

So he enrolled in Le Cordon Bleu cooking school in Portland, which he attended for a year. He loved working with food and learning the science behind cooking; his describes his family as being food-centric and pretty choosy about what they prepare.

That training brought him to Marion Polk Food Share as the agency relations coordinator, which meant he got to visit all the affiliated sites throughout the region.

“That really gave me good spectrum of the real need on food,” he said. “That opened my eyes a lot. I was focused on social justice and Latinos and what is happening here, but I was not seeing the whole thing. Hunger doesn’t look at your color or your economic status. People might go hungry for things that they shouldn’t. I wondered what the hell was going on. That brought me to do more work in food systems, making the connections.”

He became a certified Master Gardener, learning about plants and growing systems that are ideal for spaces such as community gardens. He understands the benefits of organic farming and realizes the potential of efficient labor and techniques, all of which he can share on the job.

Valladares started with the City of Independence in 2016, and his position is designed to involve Latino residents, who make up a third of the city’s population, with the civic engagement. He enjoys the fact that this new position allows him to combine all his previous jobs into one.

“My mixed bag of experiences has really been what’s helped me to make this happen and build relationships,” he said.

His first Spanish-language Seed to Supper session focused on neighbors at Colonia Amistad, an apartment complex that already features a community garden space. If the classes take off, he said, he’ll be looking for additional plots to start new growing spaces.

On a recent evening, Valladares and a group of Seed to Supper students worked to get the Colonia Amistad gardens into planting order. The group wants to redesign the space for added efficiency, he said. Residents can sign up for a raised-bed plot, but they must be committed to maintaining it and following the community garden rules.

“Now that students have taken the class, they understand they have to amend the soil and that it takes a while,” he said. “I want to help them connect with Inspiration Gardens (another Independence project located in Mt. Fir Park) and see what other possibilities we can do, other designs, other ways of planting.”

Valladares clearly believes in paying life’s blessings forward. Just as he was introduced to an opportunity to attend WOU and get a college degree, he hopes educating residents about creating their own food resources will help them live better lives. Education, he said, it the most important possession anyone can have.

“Education for me has always been, like, no one can take that away from you. No matter where you go, you will have knowledge in your head that is part of who you are.”

Have you been the recipient of an unexpected hand up? We’d love to hear about it!