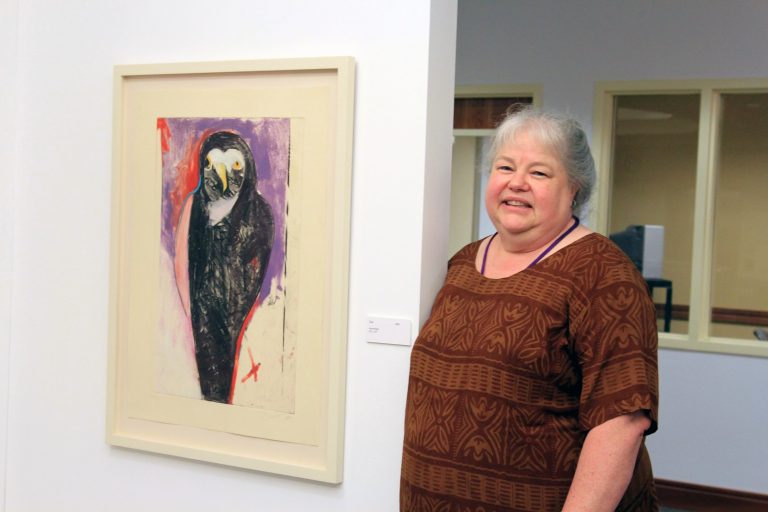 Western Oregon University has many treasures among its faculty and staff, but Archivist and Exhibit Coordinator Jerrie Lee Parpart is a rare gem, one that shines brighter for her in-depth knowledge of the university’s history and for wanting to share that story wide and far.

Parpart joined the Western Oregon University staff in 1990, when she was hired as circulation coordinator in the library. However, her relationship with the school had begun long before that, when, as a preteen, she attended classes occasionally with her mother, who was getting a teaching degree while raising a family.

“I just sat in the back and listened,” she said. “I was pretty good at entertaining myself. That was something kind of special. I got to see the campus.”

A handful of years later, Parpart enrolled in then-College of Education, but not because of the time she spent here as a child.

“I would have come here anyway,” she said. “I’m a relatively shy person, and I couldn’t face the huge classrooms at a huge college. It was comfortable here, and I had already met some of the professors.”

Her college career started in chemistry classes – her dad was a biochemist — and she was about a term away from graduating when she shifted gears to art education.

Then she did a student-teaching stint at a high school in Salem where the majority of her art students were on parole. She found out that many of them had been expelled from school but were showing up to her pottery class anyway and then leaving campus. Administrators told her she couldn’t let them on to school grounds, even though they were doing well in her class.

“That’s when I knew teaching wasn’t for me,” she recalled. “I didn’t want to be a part of a system that refused kids who were eager to learn. I thought, if that’s what’s out there for administrative support at the time (early 80s), there’s probably many other things I could do, since I’m interested in pretty much everything.”

After graduating from then-WOSC in 1982, she worked in Margaret Furlong’s studio in Salem, crafting the company’s signature shell-shaped porcelain ornaments along with four other artists.

“I was interested in art pretty much all of my life,” she said. “Arts and handcrafted items were how we did it in our family. I was in high school before I learned you could buy noodles in a store. I still consider myself an artist. I weave, paint and do a lot of mixed media work.”

She took her first job in a library around 1983, when she started at Willamette University. She restocked shelves and worked the circulation desk, helping visitors check out books. Parpart’s seven years at Willamette included a move to a new library building, and that experience came in handy when she sought to transfer her skills to WOU in 1990. Even though Hamersly Library was still a decade from realization, the people who hired Parpart valued her insight about staging a move. She ended up playing an important role in the planning of the new building, giving advice on shelf placement and configuration as well as lobbying for exhibit space.

“I worked on where the stacks should go and what we needed in each particular space,” she said. “For example, the periodicals don’t need as many shelves because they are big, and you need room to get them out and in. Same thing for documents. They are tiny, so you want dividers in there. That’s the type of thing I was involved in.”

In 1997, she earned her library information science degree through a distance education program with Emporia State University in Kansas. This was many years before online courses, so Parpart snail-mailed assignments and took classes once per month from professors who traveled to Oregon to teach them.

When Hamersly Library opened in 2000, Parpart had five job duties, including building manager, exhibits coordinator, signage coordinator and reference guru. Over the years, that list has narrowed to the two positions she holds today, mostly because the range and frequency of exhibits has expanded.

Half of Parpart’s job is as archivist, meaning she oversees the university’s large collection of historical items that date to when Monmouth University was founded in 1856 and the 161 years since. The artifacts, documents and memorabilia are hidden in a temperature-and-humidity-controlled room of the library, and walking down the aisles is like a treasure hunt.

In addition to cataloging the items, Parpart uses them to answer history questions about the university and to stage exhibits that draw on the past. For example, the exhibit currently in the library’s bottom floor was created by student Max Norr – with Parpart’s help – and features books belonging to Sister “Birdie” Genevieve Lantz. She was a nurse with the American Red Cross during World War I, and she used journals as therapy tools for injured soldiers.

“I’ve been working on getting those materials here for five years,” Parpart said. “That is one of my dream exhibits, one that I’ve really wanted to do for a long time. Max did an amazing job with research and bringing it all together, working with Dr. Kim Jensen.”

Parpart’s involvement with the archives, in conjunction with her 27 years at the university, make her the most valuable resource on campus for institutional knowledge. If she doesn’t know the answer to a question about the school’s past, she will comb the collection to find it. It’s a tool more people are realizing is available to them.

“There’s an awful lot of reference work that’s involved with answering questions for the archive itself,” she said. “I’m very excited because I just looked at the (inquiry) statistics, and they’ve doubled since the last year. So I must be doing something right, letting people know we have an archives.”

She’s also incredibly game for helping students stage the exhibits that are part of their graduation requirements. There are multiple spaces on the second and third floor for displays, but she’ll carve out a spot in the library’s lobby if that’s what it takes to make a student’s work visible.

“The concept behind it is that as we create all these exhibits, I’d like to follow all of the disciplines within a five-year period,” Parpart said. “I’ve had math (exhibits), science ones, art, ASL, health sciences. It’s a way of taking an idea, a concept, a thesis and saying: ‘You’ve done all this research, what can you do besides write a paper? Let’s create a visual thesis.’ That’s kind of what I think of my role.”

She wishes she’d had someone like her when she was an art education student in the early 1980s. Back then, there were very few places on campus where student art could be displayed. She had to approach art associations and gallery owners in Salem and Keizer to persuade them to show her work.

“It made me a little more empathetic to the student who says ‘Oh, my gosh, I have to put up a show and there’s no place for me to do it on campus because there are too many art students. What do I do now?’” Parpart said. “I say, ‘OK, let’s figure out a way we can put it up here. It’s OK. You’ll get through your degree. If I did it, anyone can do it.’”

Parpart is highly focused on student success, but she also encourages them to take responsibility for their own achievement. It’s a lesson she learned her first day of her first class in 1977.

“My professor said ‘OK, you are freshmen. You are here to claim your education. If you want to be educated, you educate yourself. I’m here to guide you,’” she recalled. “That stuck with me. I tell students the same thing. If you want to do more than just the minimum, you let me know and I will tell you as much as I can.”

Parpart’s institutional knowledge and dedication to going above and beyond for students make her a significant resource to the entire campus community.

Want to learn more about the WOU archives or offer a donation of historical materials? Contact Jerrie Lee Parpart at 503-838-8419.