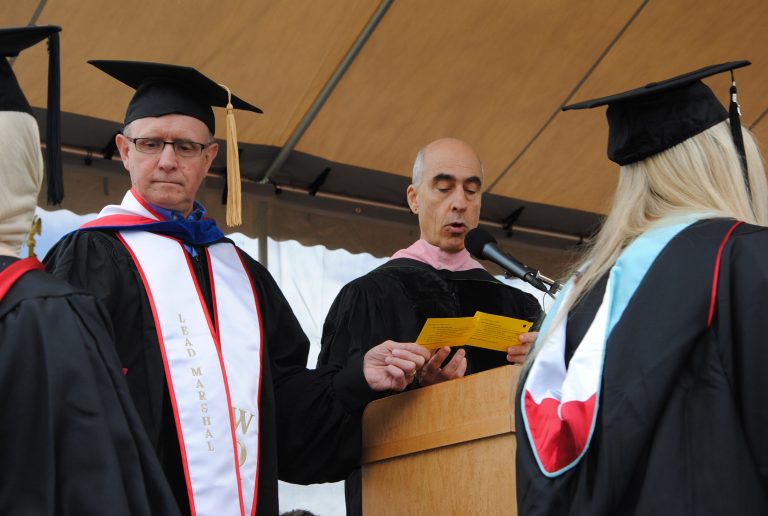 Imagine standing on a stage filled with Western Oregon University dignitaries. There are thousands of pairs of eyes watching you, expectant. President Rex Fuller is poised nearby, waiting to congratulate more than a thousand graduates. On the lectern in front of you is an extensive list of strangers’ names, many of which contain a dizzying number of syllables. If you get a name wrong, it could mean disappointment for the friends and family who have waited years to hear those words pronounced.

For most people, this scenario is terrifying. For music Professor Tom Bergeron, it’s Commencement.

Over the past 12 years, Bergeron has been the master of the microphone when graduates’ big moment arrives. He and Head Marshal Steve Gibbons set the cadence for the conferring of degrees, moving the line of students from the steps to the stage and back down.

In the past, the duty of Commencement announcer has fallen traditionally to the registrar. Registrar Amy Clark, who has been in her position since December 2015, cannot understate her appreciation for Bergeron’s skills.

“When I first took this job, someone told me that reading the names would be my job,” she recalled. “I politely explained that if I did it, it would be terribly disappointing to the graduates, their family and friends. I do not have the strong voice or skill with pronunciation that is required to pull it off.”

“Tom brings not only a smooth and steady demeanor, but also a personal touch and caring to the students that is rare in ceremonies of this size. From day one, everyone told me how well Tom read the names, the attention to detail he gave each student, and his ability to manage more challenging pronunciations.”

This year, there will be a new wrinkle as each student’s card is scanned so the name will appear on the giant screen. Bergeron isn’t worried about the added complication.

“I think it’s kind of cool,” he said. “The challenge has always been the pace. If you take too long to read the names, it could take three hours to get through all the names. We got through in 42 minutes last year. We will do a rehearsal with some practice names to make sure it all works.”

The additional step in the process is new, but it is no hurdle at all compared to the process Bergeron faced when he first got the gig. Back then, the names were written in The Book – “capital T, capital B,” he says – a large-print list he adorned with pronunciation notes.

Even now, when the list of names is generated online and The Book has been rendered obsolete, Bergeron spends the majority of his preparation time perfecting his pronunciation. First, he says the name as he thinks it would sound. Then he checks the phonetic suggestions students make on their Commencement registration. If he gets it right, he moves on. When his pronunciation is incorrect, he keeps practicing.

“That’s all just the logistical part,” he said. “The fun part is seeing the range of names that we get from different cultures. I’ve enjoyed the challenge. I try to focus on the way a graduate wants their name to be pronounced. If it’s a foreign language, like with an international student, I try to enter that language. I’m sure I’m nowhere near the Chinese names, but Latin names I can come pretty close to.”

Bergeron’s prowess with Latin names comes from a childhood spent speaking French and a more recent acquisition of Portuguese. He’s married to a Brazilian woman and fronts a band that specializes in Brazilian music. He and his wife have an apartment in Rio de Janeiro.

Registrar Clark admires the fastidiousness Bergeron shows in practicing students’ names, as well as the pace he works so hard to maintain.

“The hardest parts of the job are working through difficult pronunciations and managing time,” she said. “We ask a lot of Tom, and he consistently delivers. We want the names read properly and clearly, but quickly so that the ceremony doesn’t lag. Tom somehow manages to do it all. No doubt part of that comes from his years of being in this role, but another part is just Tom’s unflappable, kind self.”

Although Bergeron has spent many June afternoons attending WOU’s Commencement ceremony, he didn’t attend any of his own three college graduations. Now, part of him wishes he had.

“Over the years, as I’ve been more involved with it, I’ve gotten more appreciation of the ritual aspect of it,” he said. “For the big moments of our lives, a ritual helps to mark the occasion. We do it when we get married and for birthdays. This is a big moment for students. It’s a way of passing through that stage with a ritual, with the people we love, our friends. It’s a celebration.”

This weekend’s event will be Bergeron’s final outing at WOU Commencement. He is retiring after fall term 2017, ready to spend more time in Brazil, to finish a couple of CD recordings and maybe to write a book on theory and improvisation for contemporary musicians. He’s not sure who will take his place, but he has some suggestions for ideal announcer traits.

“If there are any criteria for it,” he said, “the person who would enjoy it would be a person who is good with languages or has some experience with public speaking or performing. Because it is a performance. It’s an ability to think about pace and the delivery of the names.”

The next announcer will get to enjoy the varied reactions graduates have as they reach the stage to receive their diplomas. Bergeron kept his head down during the process, focusing on the pace and pronunciation and avoiding distractions. But he knows some students can’t help but bound across the dais.

“Some are kind of shy. They’ve never been in front of people before,” he said. “Others can’t help but be exuberant.”

When the Commencement announcer job came open in 2005, Bergeron quickly volunteered for the duty. He’s a great example of the many faculty members who work hard to make sure WOU students get the university experience – and graduation experience – they are looking for. And he’s not worried about snafus this Saturday.

“It should all go smoothly,” he said with a smile.

Are you excited for Commencement or have a great story about Prof. Bergeron? Let us know!

Everything students, graduates and parents/visitors need to know about Commencement can be found at wou.edu/commencement