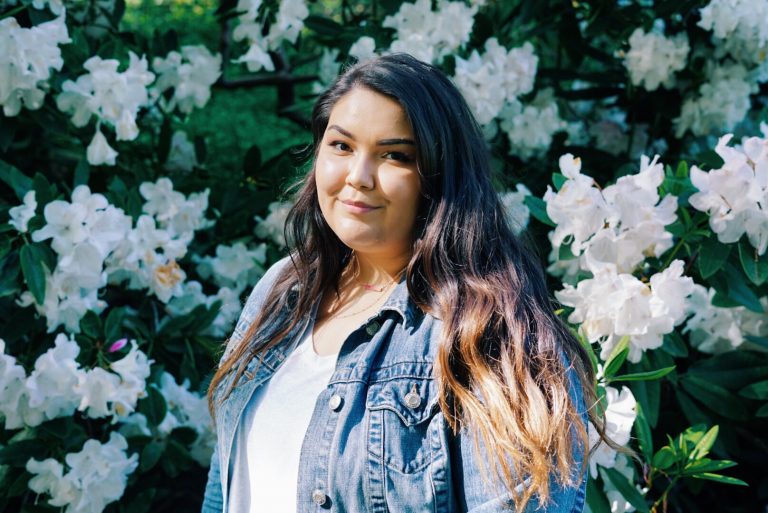 One of the first things you notice about Rosita Olalde, though you may not think that it is particularly noticeable at all, is how modest she is. She has a way of talking about her biggest accomplishments in the sort of way that understates that she even played a part- though without her, TRU (technical and regional university) Day, a lobby day at the state capitol, may not have even happened at all.

Rosita Olalde, of Salem, Ore., graduating this term with a degree in Public Policy and Administration and a minor in Psychology, has a natural gift for organization. Since her earliest days at Chemeketa, Olalde has been exploring her passion for helping students and providing background support.

She recently served a term as an intern in the Office of the President. For Olalde, it was a natural fit. At the urging of one of her professors, Olalde applied. To no one’s surprise, except her own, she scored the internship. “I hadn’t seen a student job in the President’s office. You don’t see that a lot- or ever, actually.”

Though she had quite the impressive resume, which included a term at Upward Bound, a college preparation program for local high school students, she credits her luck at securing a position with the President’s office to Professor Mark Henkels. “[Henkels] came to do my site review at my internship and I told him ‘I wouldn’t be here if it wasn’t for you.'”

While working in administration might not be everyone’s calling, it is where Olalde thrives. And it is where she sees herself after WOU. “The internship with the president’s office has been more administrative. But then I’ve done things that are more student services. Like I work at Upward Bound here. And that’s working with high school students. I can’t pick which side I like better. So I want to try it out as a professional.”

Also on the horizon? “And then I’ll get a Master’s. And a PhD. Someday.” Modest as Olalde may seem to be, she knows what she wants and how to get it.

I asked her to describe herself in one word. After some deliberation, she settled on “motivated”.

But back to TRU Day. Earlier this term, WOU joined Eastern Oregon University, Southern Oregon University and Oregon Institute of Technology in an attempt to lobby the state capitol for additional funding. The day involved a horde of around 200 advocates, some of whom lobbied and others who merely came to show their support: students, faculty and administrators.

Olalde’s job involved helping coordinate the entire event. In the weeks leading up to the big day, her days often involved long conference calls with other school representatives. She had never lobbied before until then. She credits her success to having “good guidance” from her supervisors, though her knack for public policy certainly helped.

Professor Mark Henkels had nothing but high praise for Olalde. “She is one the most straight-forward people I know. She is truly honest and remembers everything you ever say, which means she holds you accountable for your words.”

He went on to say, “She is a person who wants to make positive change, and already does this through Upward Bound. In the long-run, I see her as a true leader. Not a talker, but a person who listens, cares, thinks problems through, and completes things responsibly and collaboratively.”

Whether at WOU or Chemeketa, chances are likely you’ll see Olalde around campus after commencement- as an office administrator. Knowing her, it’s not so much a possibility as it is an inevitability.