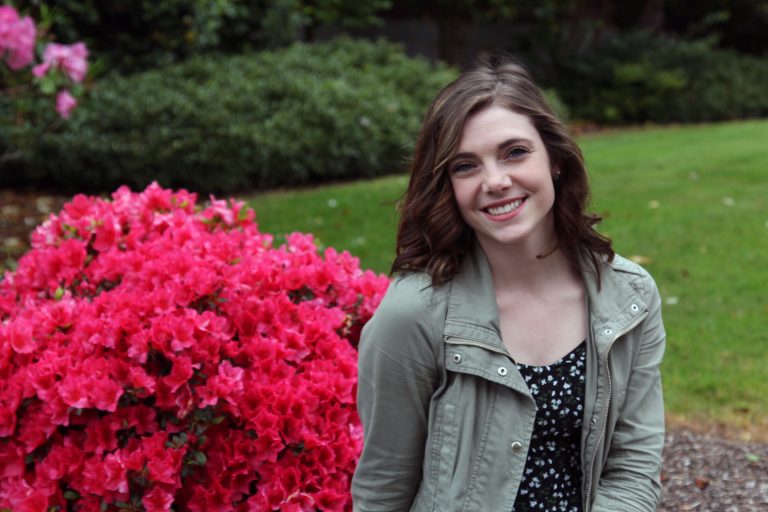 If the ultimate goal of attaining a degree is to get a job right out of college, Aleisha Douthitt, this year’s Julia McCulloch Smith Award winner for outstanding female graduate, is well ahead of the game.

The Honors Program student already is putting her bachelor’s degree in elementary education to work; she landed a job teaching first grade at Monmouth Elementary School—the site of her student-teaching gig—more than a month before graduation.

“I couldn’t believe it,” she said. “I went up against four or five other candidates and they told me I got the job. And the best part is that I get to move up with the kindergartners I’ve been teaching.”

Douthitt’s focus on helping others was formed her first year at Western Oregon University. She got involved with residence hall leadership right out of the gate and went on to spend several years on the Peer Leaders Understanding Students (PLUS) Team. The PLUS Team assists incoming students when they visit campus for orientation and class registration during the summer.

“I fell in love with the community and the campus and the people,” she recalled. “I loved being a student leader on this campus, and then it didn’t really feel like a choice, it was just part of who I was. That’s the way I chose to give back. After Western became such a home to me, I wanted to make it that for other people.”

She also understood how difficult the transition from high school to college can be. A first-generation high school graduate and university student, Douthitt admits she had a tough time early on.

Those initial struggles were a major motivator behind her involvement with the PLUS Team, where she has served as both a member and student coordinator.

“PLUS Team interested me because I remember my freshman year seeing that PLUS Team member and having a friendly face,” she said. “I wanted to be that voice and that mentor for people, someone who tells them ‘It’s rough, but this is where you need to be because people want you here and you are going to succeed.’ ”

And succeed she has. Her nominators for the Julia McCullough Smith Award tout her welcoming, inclusive attitude and her emotional intelligence.

“Professors and peers think highly of Aleisha because of her drive to engage in an active learning environment,” wrote nominator John Wilkins, the Leadership and Inclusion coordinator in Student Engagement. “She does not shy away from tough discussions or topics, but dives into them with maturity beyond her years. She offers a unique perspective and is always open to learning something new. She is seen as a knowledgeable resource to all of those who have had the privilege to work with her.”

Looking back on her college career, Douthitt is content that she accomplished what she came to WOU to do. In addition to earning a degree in education, she has worked hard to leave a legacy on campus.

“When I was in high school and thought about what I wanted college to be like, I didn’t just want to get a degree and be done,” she said. “I wanted to do something that was going to make an impact. It was important that I made the most of this experience because it was a blessing. I got good grants and scholarships, so I really wanted to honor the people who helped me get here.”

The Julia McCulloch Smith Award is presented to the outstanding female student of the year in the memory of Smith, alumna of the class of 1895, who died in 1930. The award was first presented in 1931. The award finalist this year was Sydney Culpepper of Klamath Falls, Ore., an English/linguistics major.